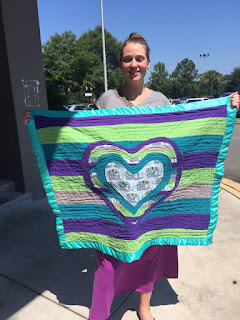 Well, I don't know if old Mer is coming down with what the boys have or if she's just flat-out tired but either way, I'm not going to that meeting tonight. They can figure it all out by themselves, the Village of Lloyd, the county commissioner, the owner of the truck stop and whoever else is involved. Whatever's going on, I ache and my skin hurts and my eyes are burning but I think that's due to the skin cream I've been using for daytime which has sunscreen in it which is not gentle to the eyes when it leaks in.

We had a lot of fun at lunch. I gave Jessie her quilt, as you can see above. I'm sure you can hardly tell that I didn't use a tape measure at all to make it. Rip, tear, sew. Rip, tear, sew.
I love the colors. Royal colors for a royal baby. When we said good-bye after lunch, I just laid my head on that beautiful belly of Jessie's and kept it there for a long time, beaming my love thoughts into the little boy's heart.
I probably annoyed the shit out of his mother.
But she patiently tolerated me. All of my children are so very kind.

Lily and the boys and I drove in the exact wrong direction to find the place where we were buying the kitchen. Strangely enough, the intersection of the two roads we were looking for ends up happening both east and west in Tallahassee. One of the roads is a circle and it crosses the other road twice. Still, we managed.
Here's Gibson playing with his new kitchen. 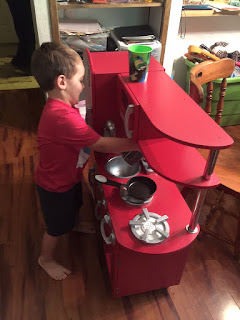 It's so cute. Heavy sturdy wood. And red!!!
Who doesn't want a red kitchen?
Owen's going to play with it too but when I left, he was busy eating his miso soup and salad with ginger dressing and sushi that his daddy picked him up at Japanica! because he didn't want any of the Indian food. He's the sickie boy now but he's doing okay and he was so happy about that soup and salad and sushi. How I love those boys. How many times have I said that? I'll never get over the way I love my grandchildren. It's just such an unexpected miracle in my life. I was holding Owen's hand as we were walking into the restaurant today and I said, "I'm so glad I know you."
And that's it, you know.
I get to know these precious people and watch them grow and even be a part of it and love them so much and be loved in return. It's different than being a parent. I mean, kids, especially young kids, sort of have to love their parents because they are the source of life and sustenance. But grandparents? That's just free joy there. Pure, free joy. And I can't help but think that my love for them is a joy in their life, too. They may not think of it as such right now, but eventually, maybe they will. I hope they will.
I think they will. I surely do.

I kissed Owen before I left, gently, on the head and he said, "That was nice of you to kiss me on my head, Mer."
He said that. He did.

And soon there will be two more to love. And once again I will be reminded that there is no limit to the love a heart can hold. More love means more love.
As I've said before, I think that love is truly the current that propels and powers this universe and what we know and define as love is only the merest shadow of a molecule of that, as powerful as we think it is. Somehow it all has to do with quantum physics.
Trust me.

And it's no flaw in the language that causes us to say with equal fervor that we love our friends, our lovers, our children, our grandchildren, our pets, the sunset, the mountains, the water, cornbread with cane syrup on it. Of course the range of our love is vast but whenever it's real, it's a force for good. The artist loves her paints and her canvas. The poet loves his paper, pen and the words. The sculptor loves the stone and the chisel, the potter loves the clay and the wheel. The cook loves the oil and the garlic, the gardener loves the dirt and the seed. The lover loves the touch and the heart. The baby loves the milk and the warmth. The scholar loves the book and the teacher. The sailor loves the wind and the canvas. The carpenter loves the wood and his tools. The musician loves the instrument and the notes. The scientist loves the question and the answers. The mathematician loves the numbers and the proofs. The dancer loves the effort and the bending of the body to perfection.
The motion loves the motion, the inertia loves the inertia. The hips love the music and the heart loves what it loves.
The flower loves the sun, the cat loves the hunt, the bird loves the seed, the water loves the moon, the fern loves the shade, the moon loves the earth and the earth loves the sun and thus, we are bound together in life.

Call it what you will, it is the love which is the source of creation and of art and of gravity and of all life as we know it.

That's what I think. I could just be having fever dreams.

We may not always understand where this love comes from and sometimes it gets perverted and ends up badly (the politician loves the power, the wealthy love the wealth, the cruel love the giving of pain, the junkie loves the needle, the liar loves the lie) but it's what we have and we may not understand it all nor may we ever, but there has to be something to balance it all out whether we are talking shadow and light or yin and yang or god and devil or north and south or positive or negative, from the cells in our body on up.

Well. That's about as profound as I know how to be.