Another Day, Another Adventure 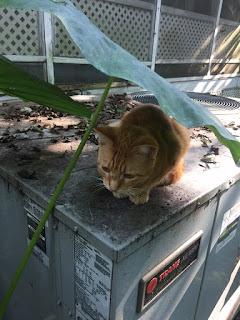 Maurice is enjoying the cool morning air, waiting on the chickens to be let out because that's one of her favorite things to do- watching them explode forth from the hen house. She's been sleeping with me all night, every night since Mr. Moon's been away. I've been sleeping so hard that I barely have to make the bed. Just pull up the corner of the sheets and quilt and resettle the pillows.
We are good bed mates, Maurice and I.

Last night was so perfect and I read way too late but I feel good today. Going to town to have lunch with Hank and Jessie and Lily and both of the boys. Owen has what Gibson had so he's not in school today and we wouldn't drag him around except that after lunch we're going to go pick up a play kitchen that Lily found on Craig's List and so hey! We're going. She said he doesn't seem to feel that bad right now. And it's no problem if he doesn't feel like eating because we're going to the Indian restaurant and he doesn't like that food anyway, unlike his brother whom I hear had about twenty pieces of butter chicken last time they visited the restaurant.

And so it goes.
Tonight I may be going to a community meeting at the truck stop. They're going to be discussing possible brown field clean up around the truck stop and also possible development.
Do I have any idea what brown fields are?
No.
The woman who came by yesterday with a map of this proposed whatever-it-is was quite sure that we don't need possible development in Lloyd and I found her presence so odd that I immediately jumped into devil's advocate mode and I'd really like to just find out what's going on.
Of course, this being Lloyd, probably not much for a long time.
I mean, it took two years to get sidewalks in.
But at the very least, perhaps I'll be able to check out the menu at The Bone.

It's all about food for me, isn't it?

All right. I better take a shower.

And let the chickens out.