Oh my god. I just had a major freak-out and it's all my fault. I left my wallet at Costco today and just discovered that fact a little while ago. I called and in the time that I got put on hold with three different redirections of lines, I had plenty of time to blow myself into full-blown panic.
They do have it, and I am so grateful and I am now aware (through the loop of hold announcements) that Costco can not only provide you with cheap drugs in the pharmacy but that they can also plan your romantic get-away, print your pictures, do sushi platters for parties and that they really DO care about your call, and their sheet-cakes are plenty big enough for most people to have seconds!

I haven't lost a wallet since about 1983 when someone stole mine from my purse at Kent's Bar in Tallahassee. Years later they found it in a potted plant. I mean, YEARS later. They called me and I went and got it. It was a little bit rotted. And I'm completely OCD about checking for both my wallet and my phone in my purse. At least once a day I'm certain that I've lost at least one, which always turns out to be not true but today, yes, it was.

Where is my mind?

I was already feeling overwhelmed and weird and not very good. Got up at 6:30 this morning, which in and of itself was completely lovely but I hadn't had nearly enough sleep and then we drove to town to sit in the neurosurgeon's office for an hour and a half or maybe two hours, whatever.
He was a nice guy and he told us that frankly, he didn't think that surgery is going to help anything in this case and that he's baffled too.

So maybe all of this has me rattled and also we're giving Jessie a baby shower on Saturday and when I say "we" I don't really mean me, because May's doing most of it and I just have a few things I need to do but this sort of thing always makes me woozy and panicky which is completely ridiculous and I am doing this to myself and I know it. So thank you, no need to tell me.

I was just thinking yesterday that it doesn't seem right that Lis Williamson, who loves and adores planning beautiful weddings and showers and parties, and who is so good at organizing them and making them perfect has ONE son who virtually eloped while I, who can barely handle going to one of those events, have three daughters, all of whom have gotten married which entailed all of that planning and dress shopping and, and, and...
I actually did sign up for Pinterest a few weeks ago, thinking that would inspire and help me with these things but I quickly realized that no, it was not going to do that and I canceled my account.
Thank god that Lis is my darling friend who has jumped in to help with every event my girls have had since she's known me, as has my other Liz, Liz Sparks. Who, come to think of it, only has only sons.
How many wedding cakes has Lis made us now? How many receptions has Liz decorated for?
I owe them big time.
BIG TIME!
And they have allowed me to get through these things and even enjoy them although I will always feel inadequate to the task at hand.

But anyway, la-di-dah and I haven't done a damn thing today except a tiny bit of housework and losing my wallet and while I was trying to remove at least the topsoil from my bedroom with a broom and duster, I discovered why Maurice was dancing about in the corner a few nights ago. I found not only the remains of a small bird and plenty of feathers, but also a desiccated frog, poor darling thing. It was a big one, too, even all dried up  and flat.
I was on the phone with May when I found them and she pointed out that it was sort of like that children's book I adore, "A Kiss For Little Bear" wherein a kiss gets passed along from Grandmother Bear to Little Bear via a hen, a cat, a frog, a duck and two skunks, plus maybe some others. 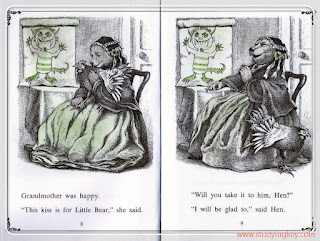 And as I told May as I swept up the pitiful remains, "Well, frog and bird are out of the loop."

That book ends in a wedding, come to think of it. 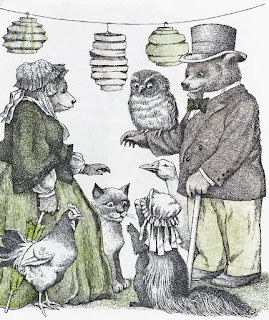 The two skunks had taken the kissing a little too seriously and kept giving it back and forth and next thing you know, they were getting hitched.

It's the most charming book in the world. Quite possibly.

So there you go. Instead of feeding the homeless or doing something about the melting polar ice caps or even working on my pitiful baby blanket, I have done nothing but moan and worry and whine and fret and sit in a doctor's office and lose my wallet and sweep up dead things.

What did you do today, dear friends? I hope whatever it was brought you some joy.
Thanks so much for sharing this crazy ride with me.