If The Word "Fuck" Offends You, Don't Fucking Read This 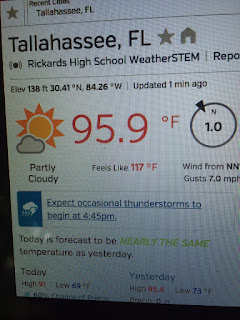 That cracks me up. And frankly, it may well HAVE felt like 117 degrees today. I don't know. But it sure was hot. The whole time I was outside picking peas and cleaning the hen house, I kept thinking about the signs at a local gym/workout place advertising their new hot yoga classes, heated by green heaters!
Are you fucking kidding me? Just open the damn doors and windows and shut off the AC. You won't get through three warrior poses without the toxins flowing out of your body like a river! You'll get stuck in child's pose because you won't be able to peel your body off that mat.
I guarandamntee ya.
Better yet- go outside and do your yoga! Yeah, baby. Now we're talking some HOT YOGA! That would be some REAL motherfucking hot yoga there.
Whatever. What do I know? Not one damn thing.
But I'm pretty sure that I'm toxin free now.

I've had the most beautiful day. It's been just what I needed. I did talk to Billy on the phone and that was wonderful. Also to Lis and we giggled like Betty Rubble and Wilma Flintstone. And to Lily. Lily and I can't seem to go a day without talking to each other.
We are like Gibson.
"I need you!"

Hey. Look what I found in the garden. 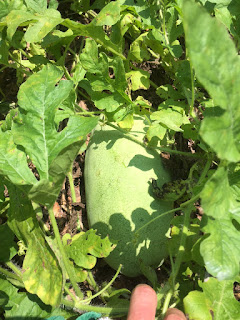 I found at least half a dozen real live watermelons of decent size. I'm shocked! Shocked, I tell you! I'm glad they're growing something besides vines. Those vines have swallowed the zinnias and most of the peas although I did pick enough to fill a nice sized bowl, once shelled. And I had a good time, sitting there on the couch in the air conditioning, watching "Real Time" with Bill Maher. Of course it was a rerun but I enjoyed it anyway.
You know what I want to be in my next lifetime?
No. Not a unicorn or a dolphin or even a princess.
I want to be a comedian who gets paid to speak her mind using a buttload of profanity.
Yep. That's what I want to be.
Roseanne. St. George Carlin. St. Richard Pryor.
Hey. Speaking of St. Richard- remember when Bill Cosby chastised him for all the profanity?

I don't know why I love to curse so much. I certainly wasn't raised that way. My granny was so pure of mouth that she would spell D.A.R.N. when she was absolutely the most frustrated or upset.
I remember being shocked (and somewhat thrilled) when my mother would say, "Hell's bells."
Reading "Gone With The Wind" was completely liberating to me because sometimes they said, "Damn!" in it.
And then I read Abbie Hoffman's "Steal This Book" which advocated that we all say the word "fuck" as often as possible because it was the one word absolutely guaranteed to shock and offend.
I did know the word, having heard it from a boy named Lee Grant who was in my grade in elementary school. Lee's father was a fisherman and a bad drinker who would beat his wife on Friday nights and then she would chase him around the house with a knife so yeah, he had definitely heard the word. He also brought a condom to school. Not for official show-and-tell but for the real thing, out on the playground.
Oh, Lee. Thanks for the memories.

Anyway, I fell in love with that word. "Fuck." It's just so satisfying. The way you almost bite your lip with the beginning f, and end the word with that tongue-clicking ck, that dirty-sounding short-u in the middle of it all.
You can say it slow and easy, too.
Aw, fuuuuck.
It's just the most useful, multi-purpose word I've ever run across.
Fuck this.
Fuck that.
Fuck me.
Fuck you.
Fuckin' A!
Fuck alla y'all.
What the fuck?
Fuck YAH!
Fuck NO!
Can you fucking believe this?
No fucking way.
Are you fucking kidding me?
Jesus Fucking Christ.
That fucking sucks.
Fucking awesome.
And so forth.
Add the word "mother" to it and baby, you got a curse thing going!

There is also, of course, the main definition.
"Hey baby. Wanna fuck?"

It's noun, it's adjective, it's adverb, it's verb. It's probably some of those other grammar things I don't remember.

And I never grow tired of it. I think Abbie Hoffman was right. It's The Bad Word.
And I guess that The Bad Girl in me just loves to say it.

All right. From the garden and watermelons and shelling peas and hot yoga to my favorite word.
Which I would absolutely love to be paid for saying onstage.

I'm going to go cook some fucking dinner.
It's been a great fucking day.