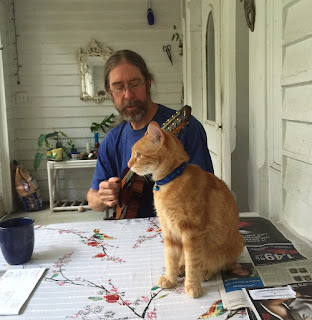 It has been a lazy, lazy day. Right after I described the scene from the back porch this morning, Lis handed the mandolin to Lon (who was the maker of that instrument) and Greta leapt through the dog door to go scare the chickens and Maurice was roused from her slumber to see what the bawking was all about.

That was pretty much the most excitement we've had all day, to tell you the truth.
Okay, actually, the bottle tree, which is a redbud tree, did crack in half and fall to the ground with all of its bottles. It was inevitable. But no one heard it (and yet, still it fell which seems to answer at least one of the eternal questions) and we just realized it happened when we went out to get eggs. And don't ask me which came first, the chicken or the egg because that has yet to be determined. 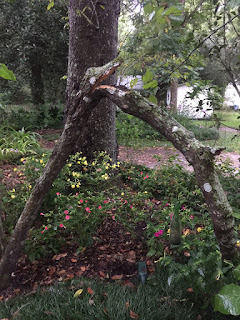 While I was out taking this picture, I took the annual requisite picture of one of the four o'clocks because I think they are just the most charming flowers. Look at those red pistols and stamens! 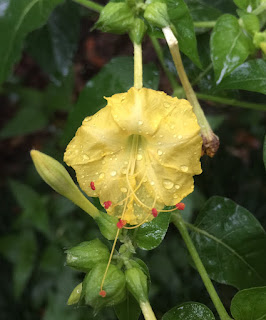 If I was a bee, I'd make love to those flowers all day long.

See the rain drops? We've had some rain, but not a lot. Gray skies and rollin' and tumblin' in the celestial percussion section but enough rain to damp the ground, to smell so good that you just want to snap the air and eat it.

Speaking of eating, we have done that. When Jessie and Vergil got back from kayaking, Lis set out a snack buffet of cheese and crackers and strawberries and I got out the chicken and sliced it. Then the beets and carrots.
Mmmmm....

My friend Liz Sparks drove up to Plains, Georgia today to hear Jimmy Carter teach his Sunday school class. I have no idea how many times she's done that. She's the kind of person who thinks of things that would be cool or good or fun or important to do and she just does them. She doesn't dither on about all the reasons she shouldn't do these things, she just does them. I admire that in her so much and I so wish I was at least a little more like she is. Yesterday she brought me two presents from her summer away in the cooler climes where she house-sat and was the nurse for a boy's camp. (See what I mean? And the whole time she was able to do her "real" job via the internet.)
Here's what she brought me. 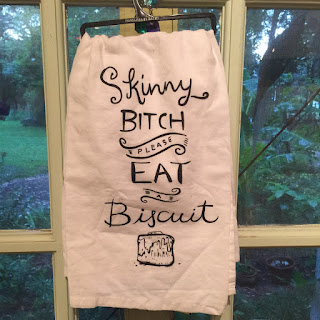 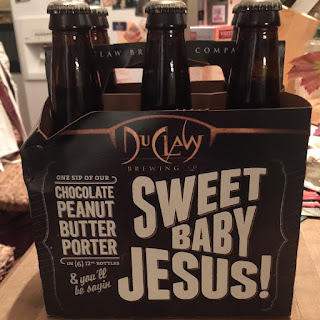 A tea towel and a six pack.
I can't wait to taste that porter but I really don't want to use the towel. It's too good to mess up.

Lon and Lis have gone over to Lon's sister's house for some supper and Maurice and I are holding down the fort. They'll be back a little later but they have to leave tomorrow. Golly, but it's been wonderful having them here. I'll probably cry like a little girl when they leave tomorrow. I won't be able to grieve too long though because I'll be hanging out with the boys in the afternoon.

I heard from my man today. They saw a shit ton of gators last night but no big ones. But they're having fun. This all must seem like an adventure on a different planet for him. Sleeping all day and spending the nights roaming the gnarly branches and creeks of the Apalachicola River. I keep thinking about that monster gator we saw down in Roseland and it gives me the shivers. But you know- my first love was Tarzan and I guess I married the most reasonable facsimile I could find. The roses he brought me before he left are opening like the pink velvet faces of a maiden, freshly falling in love. 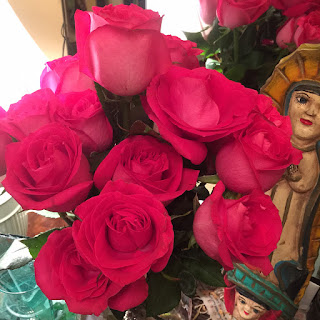 He thanked me today for taking care of things while he was gone.
Lord, did I win the lottery with that man.