We Are Stardust, We Are Golden. And Then We Clean Up Dead Animals Because Some Of Us Think We Got To Get Ourselves Back To The Garden 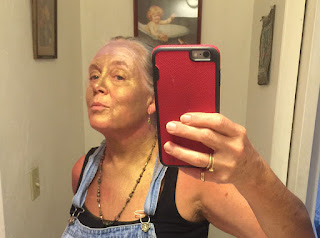 That's me after today's make-over.
It's been some day.
What occurs to me is that my ability to make-believe (act) has stood me well over my years of child-rearing and child-tending. Give me a role and I'll play it. I surely did enjoy my years of using this skill onstage but now I have slipped back into using it entirely with children. And as with the onstage thing, make-up is often involved.

My boys are very much into role-playing and imagination. Gibson creates little scenarios with anything and everything. He plays all of the roles, using whatever is at hand to stand in as actors. Owen's imagination touches everything he does, at least with me.
He is going through a thing where he does not like to be alone in a room in my house. "The monsters follow me around," he says. This is not worrisome to me. It is amazing. He assigns me my parts in his narrative many times a day.
When I was being made-over, I was the Queen of Harvard (!?)  and that somehow involved pyramids, as well as the tried and true role of being a woman who was going to go to a party.
"You will be the most golden woman at the party!" he proclaimed.
He was right. If I were going to a party, I most certainly would be. The theme from "Goldfinger" is looping my brain as we speak.

We also walked down to Papa Jay's for a lollipop and a drink, only to find that it was closed. This does not bode well but I'm not certain that Papa Jay is making his rent which is sad as hell but there you go.
Lloyd.
Anyway, on the way home, Owen decided that when we got back we would play restaurant.
Fine.
And so we did.
I was the server/owner of the restaurant.
He and Gibson sat up at the kitchen island and I gave them menus, which were books.
"May I take your drink order?" I asked.
"We'll have two waters," Owen said.
Their entire order looked like this. 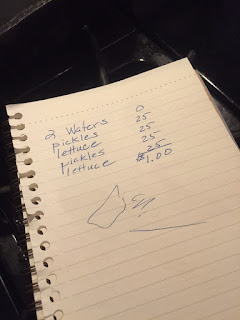 Of course I had to write it down! That's his signature at the bottom where he signed for the check.
As the dining experience continued and they ate their meal, it was discovered that I was his grandmother and that he and his brother's parents had been killed and how fortunate was it that they had stumbled, entirely by chance, into their grandmother's restaurant! I offered them to live with me now and they accepted. I showed them their room and they were happy with it.
It was just joyous! And I had to promise to take in their fish and two cats as well.
No problem. 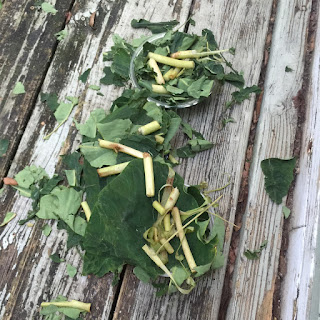 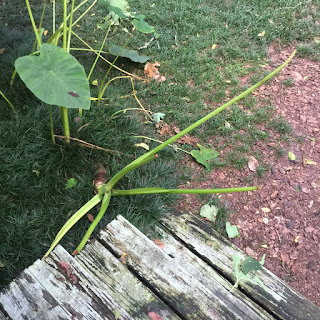 Oh well. They're about to die back anyway. They'll be back next spring.
Elephant ears are slightly toxic and I made Owen wash his hands well after his adventures in jungle cuisine. I think he'll live. I asked Gibson if he had touched them and he assured me that he had not. You know what? I took him at his word.

All of this and so much more occurred in the space of three hours.
Three hours.

One more thing- when we were in the bathroom while I was getting my make-over, Owen said something about, "That looks like blood!" and I ignored him, thinking that yet again, his imagination was cooking up something good and gory.
Then I actually looked at the place he was talking about.
Oh. Sweet baby Jesus. No.
I have no idea what happened there but my best guess is that Maurice slew a giant rat. There WAS blood, and organs and teeth. And...undefinable gore.
And it had been there for awhile.
I thought of Lis using that bathroom. I freaked. I texted her to ask if she had noticed a murder massacre scene. She texted me back just now saying, "Um...No. What bloody massacre scene was that?"
I'm glad she didn't have to see it but I know if she had, she would not have freaked out. She, too, lives in the country. These things happen.

And frankly, if that, uh, creature, was in my house, I'm mighty grateful to Maurice for slaying it.
My sweet little kitty. Whom I love to sleep with, who calms and comforts me as I fall asleep, petting her soft, clean, warm fur.

Time to go put the chickens up.