Got A Leach? He May Have A Few Drops Of Blood Left

What a day. Some of it was very good. This for instance: 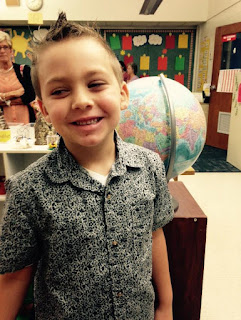 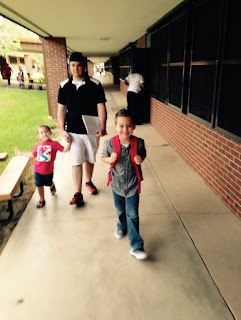 Our boy went to school and was excited about it and had no worries when his mama and daddy and his brother left to go home. I saw him this afternoon and he was cool. It all went fine. He likes his teacher. He likes his school.

In other news, Mr. Moon went in this morning after fasting since midnight and working out for an hour at the bym to get the blood tests his doctor had ordered for him.
No big deal, right?
Easier than starting kindergarten, right?
Well, there was also a glucose tolerance test and the doctor's office had failed to inform him that he was getting tested for twenty-five separate things (can you say shot-gun?) and that each of those things required that a separate vial of blood be collected.
Twenty-five vials, y'all.
And during the drawing of vial #12, he did indeed pass out for a moment, (he has very low blood pressure) and then he insisted that they go ahead because he is a big believer in getting things over with.
And hey! It was only twelve more because he had to eat before the last one was collected!
He, because he's stubborn and was not in his right mind, drove himself to Lily's house where he laid down on her couch. I got a text from Lily that said, "You know Dad's here, right?"
Well. No. I did not. He had not answered my texts.
So I called him. He sounded so horrible that I took a shower and jumped in the car and raced over there with a smoothie in a mason jar because surprise, surprise! he couldn't eat.
He did drink the smoothie with the help of Gibson who was being adorable. When I got to the house, he led me to his grandfather and said, "Boppa, here you best friend!"
I melted.
And then pulled myself back together to take care of that man and watched him like a hawk while he snoozed and then I took him to eat lunch which he barely made it through and then took him back to the lab for the one more vial draw.
The ladies at the lab told him that when he went back to the doctor, he should inform them that people should know that this much blood is going to be drawn and that they might want to break it up a bit.
You think?
Anyway, we're home now and all is well. Well enough, I guess. He still hasn't got much energy.
And I have to wonder how accurate that glucose tolerance test is going to be.

And that's the news from Lloyd.

And here's a picture that Jessie posted recently on Facebook: 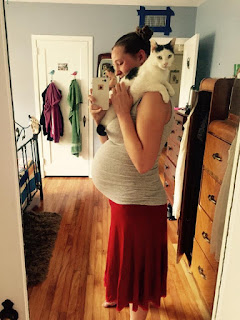 Is that a gorgeous belly or what? Her cat won't leave her alone these days. He knows something's going on.

And here I am, in complete bafflement over almost everything in the universe, mainly the medical system and how they seem to want to kill you before they cure you, or even have a clue, and I'm not really blaming the doctor's office but am just so mystified over why they would order so many tests without explaining the nature of the gathering of them.