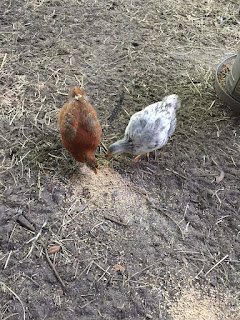 And without a by-your-leave Mama Hen has taken off. As I have said, she's been leaving the babies for longer and longer periods of time and I had also noticed that she was laying again and yesterday she simply disappeared. She's probably gone back next door and thus, she has finished the raising of her chicks.
They still call for her but I suppose that when a mother hen is done, she is done. This is the way of it and I refuse to judge her by human standards and even if I did, I would have to say that she did a terrific job. Now we shall see if the young ones integrate into the flock or not. I hope they do. They still go to bed in the little shelter in the coop but I think I am going to start putting them into the roost with the rest of the chickens at night. It may take some time. We moved Camellia from where she roosted in the pump house to the hen house for months before she finally just began to go in there on her own. Now if she would only start laying there again!

Yesterday morning I went to town to hang out with the boys while Lily had her first midwife appointment. This is the same midwife that she had with Gibson and the one Jessie is using as well. She is such a lovely woman and I feel so very comfortable with her. She does all of her work in the home. She comes to the mother which is, in my opinion, the best way to do things. This way she has a working knowledge of the family and the home and everyone feels comfortable with her and she with them. It is a beautiful thing. After the appointment (which lasted almost two hours- another thing you will not find in "traditional" obstetric care) I went to the store and then came home although I was invited to go have lunch with Lily and Jessie and the boys. I was tired. I wanted to take a nap. And I did. But look what I missed! 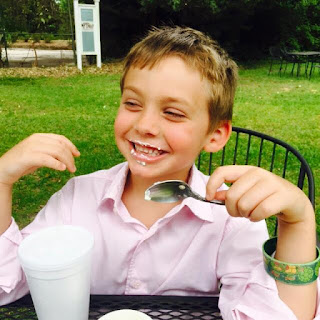 Ah well. I needed that nap.

Hank is on his way to Pennsylvania to visit a friend and have adventures. Oh my! I am so glad he gets to go but I will miss him.

And here I am in Lloyd where I plan to stay today. I took my walk this morning but went a different route. I was on my regular path when the battery in my Walkman died and since I was on the next to the last disc of George RR Martin's "Feast For Crows" I simply had to come back and get a new one and decided to head west instead of east as I usually do. I walked up to the county line 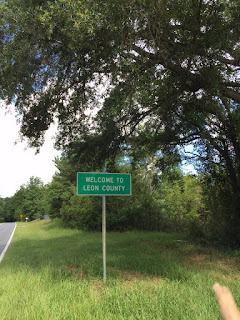 and back. It was good to get a new perspective on my little village. I waved at people in their yards and said good morning and looked at the sky. 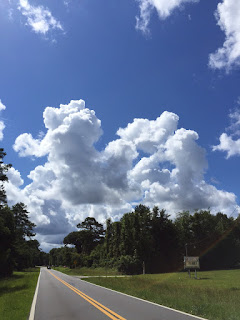 There are corn fields and churches, old abandoned shacks and tidy yards. There are dogs and there are wildflowers, there are little creeklets and shady bowers just off the road.

It would look to me as if we are finally and indeed going to get sidewalks here in Lloyd. This is in front of my house today. 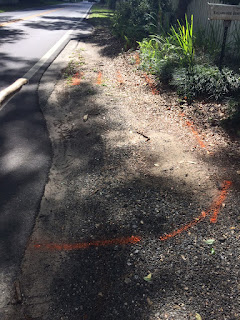 Trucks are out with crews to search for utilities, to clear the path. I suppose they may have to take out some of my ferns in front which is no big deal. I think it will be nice to have sidewalks. 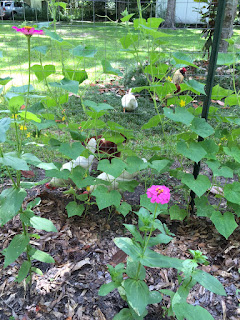 There is peace here today, there are chickens, a duck, cats. Cardinals chip, chip, chip from the trees and feeder. The sky is huge from some perspectives, tiny scraps of quilt pieces from others. The young chickens peck contentedly now under a rose bush and have given up crying for their mama. I need to start thinking of real names for them but am loathe to do so until they are older and I know if they are rooster or hen.
Which is a bit ironic in light of yesterday's post but perhaps they will tell me what their names are, one way or another and it doesn't really matter. If I disappeared today, no one would know all of the chicken's names and thus, they would be nameless. But they would be just as real and who they are without those names and that is simply the truth.

Sometimes the very transitory nature and relative insignificance of my life is incredibly comforting and freeing to me. Just as Mama Hen did her job and then went on knowing she had done her best, so will I one of these days. In the meantime, here we are.
Here we are.