A Nap Was Not Involved

Well, as St. John Lennon said, "Life is what happens when you're busy making other plans."
Just as I was girding my big girl panties (which reminds me of a bit of a dream I snatched last night where my grandfather showed up to give me a brown grocery bag filled with my grandmother's panties which were incredibly white and I said, "Well, talk about Granny Panties...") to go to town to do my errands, Lily called me. She had a new place on her leg that was swollen and red and hurt like hell.
I changed my clothes and drove to town and Jessie came to watch the boys and I drove Lily to the new satellite ER north of town which has a reputation of being chi-chi and not very busy and we checked in and sure enough, within a few moments we were in a room, having already been triaged by a very nice nurse who told us her birth story and then we were dealt with by other very nice people including a nurse tech, a nurse assistant, a nurse practitioner and a doctor. Okay, it took four hours but we had our own room with a TV and everything.
Lily has a blood pressure issue which is that her BP mirrors her anxiety more completely than anyone's I've ever heard of and it was high when we went in. And this could be a very, very long story but the bottom line is that they decided that since her BP was high, she needed fluids which made no sense to me whatsoever. Yes, dehydration can lead to a high pulse rate (which she had also had upon admitting) but Lily was NOT dehydrated. Not one bit. She hadn't had diarrhea or urinary problems and she drank about sixteen ounces of water just on our way to the ER. And I questioned them and so they didn't give her fluids which is what they WANTED to do and the NP sort of shamed us about that. I called Jessie to ask if I was crazy. She told me I was not.
Meanwhile, they did another ultrasound of her leg and it turns out that she has phlebitis which is painful but not deadly. Regular treatment would be aspirin but since she's pregnant, she can't take it. And the blood work showed up to be perfect. Kidney function, liver function, etc.
The doctor came in and told us about all of this and he told Lily that really, he'd like to see her take a week off of work because standing (which is what she does in her job) is the worst thing she can do and she's already wearing compression hose. When he told her that, that she had to take time off of work, she got even more stressed out and her BP went up a bit more and the NP shamed us about not accepting the fluids and went to talk to the doctor.
At which point, they took Lily's blood pressure again and it had come down to the normal range and they gave her some grape juice and a little pain med and sent us home with a prescription for another antibiotic even though her blood work showed NO elevation in white blood cells which would indicate infection and told her to rest and to walk.
It was funny- every one we dealt with was so personable and caring and lovely but still, the ghost of covering-our-asses overshadowed everything.
Did Lily need fluids?
No.
Does she need a stronger antibiotic even though the doctor himself said that he didn't think she has an infection?
Probably not.
But Lily got it filled and when I dropped her off at home she was talking to her midwife who, I am sure, gave her the advice she needed.

And so that's what my day was like. Being with my "child" as Owen says in relation to his mother and me.
And I was so glad to be able to do it although I am sure that at some points, Lily would have rather just done what they said and not have to deal with a mother who was a nurse.

The ultra-sound tech did a quick check of Lily's baby. It was such a surprise- to suddenly see this newest one- and his or her heart was beating and there we were, seeing that. I saw a head and limbs. I saw life.

I would not have missed that for the world.

Good Lord. I need to go prepare some vegetables for our supper. 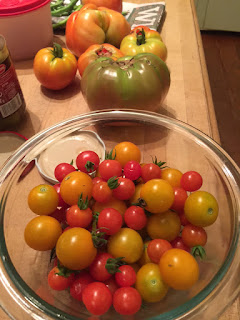