Sleepovers Which Do Not Necessarily Involve Sleep 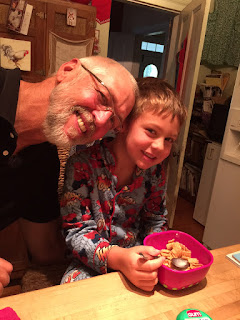 Let me just say that the boys are incredibly cheerful in the morning. This makes sense with Owen because he sleeps like a rock. I read a bunch of stories last night to them and Gibson fell asleep before we were done but Owen was still awake and wanted the Mr. Peep story and so I told it to him and he fell asleep during that and that was the last we heard from him all night.
Gibson, on the other hand, woke up before I had a chance to fall asleep. He was itching. And crying. Okay.
I brought him to my bed. Boppy laid down and we all tried to sleep.
HahahahahahahahahahahahahahahahahahahaHA!
That boy. When he isn't kicking or thrashing, he's talking.
"Mer?"
"Right here, baby."
"I need you."
"I'm right here."
"I need you hold me."
"Okay."
"Mer?"
"Right here baby."
"Where Owen?"
"He's in the other bed."
"I want see him!"
"No baby, it's time to sleep. He's asleep."

Boppy finally gave up and went and got in bed with Owen.

"Mer?"
"Right here, baby."
"Where Boppy?"
"He's in bed with Owen."
"In Mer's bed?"
And since I was half awake I said, "Yes."
This lead to hours of him wanting to go to Mer's bed despite the fact that we were in Mer's bed. I finally had to turn on the light and show him."

Last night Mr. Moon showed Owen how to use a turkey call. He held that thought in his head all night long. He is thrilled because his Boppy gave him the turkey call thing. He scared me to death with it this morning because it's a device you put into your mouth and he called me and when I went to him, he stood there making a sound which could have been (especially for one who is completely sleep-deprived) confused with the sound someone makes when they have perhaps inadvertently swallowed a turkey call device. And was choking on it.

"I'm fine. That's how I call you with the turkey call."

Breakfasts were eaten, clothes were put on, toys and books were packed, chickens were let out and fed scratch. Car seat transferred, boys buckled in, hugs and kisses given.
"I love you! I love you!" echoed back and forth as Boppy pulled out of the driveway.

I have to go to town today.
I have to take a nap today.

My god I feel old.