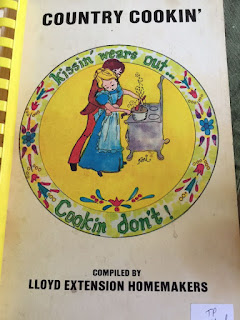 Liz Sparks gave me this little cookbook the other day and it was printed up in 1984 and it is indeed from my Lloyd. I was so thrilled.

The Lloyd Extension Homemakers had a clubhouse and the building is still right down the road from me. There's a drawing of it in the cookbook, done by Martha Canady. 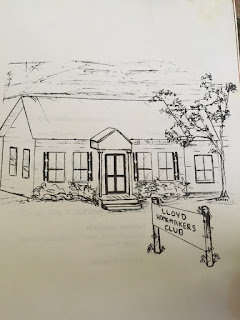 There's also a picture of it from 1958 that I found in the Florida Photographic Archive Collection online. 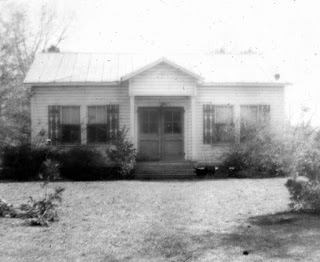 And here is what it looks like this very day. 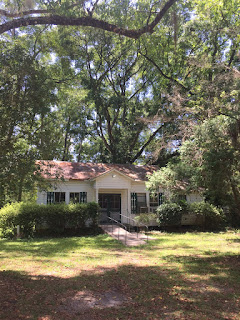 I walked down there and got a picture of it. When I lived in Lloyd, back in the seventies, that's where we went to vote. I voted for Jimmy Carter in that building. Unfortunately, Ronald Reagan won the election and I'm still so pissed off about that I can barely speak of it. Dude couldn't even ACT!
Well, la-di-dah and so forth. 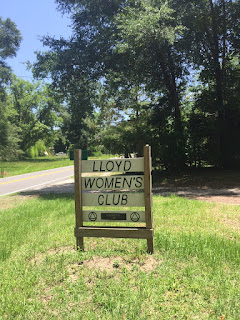 The building is no longer in use as a Woman's Club which is very sad to me, but it is used three nights a week for AA meetings and that's a pretty good thing for it to house I would say.

Anyway, the cookbook is a typical one of its era and as I was saying to Mr. Moon today, I wish it had more recipes for things like collard greens and fried green tomatoes or, actually ANY recipes for things like that instead of all of the crushed pineapple/Cool Whip/cream of mushroom soup types.
"Everyone knew how to cook collard greens and fried green tomatoes," he said.
Probably true. And every lady wanted to put in her fanciest recipe, I'm sure, so recipes with names like "Broccoli Supreme" and "Melt In Your Mouth Chicken" abound.
Yes, there is cream of mushroom soup in both of those.
There's even a recipe for Congealed Egg Vegetable Salad AND one for Potato Salad in Jello, both of which require a box of lemon Jello.
Ummm...
No thanks.
Now here's one that I almost desperately want to try:

It sounds so sickening that I can't EVEN (as the young people say these days) but what if it's the best thing ever? An entire BOX of powdered sugar?
My heart beats faster just thinking about it.

But there are some good-looking recipes for cakes and dumplings and even angel biscuits and I'm sure I'll use something from it one of these days. Especially if I'm in a gourmet mood.

So I just wanted to talk about that and show you the pictures and while I was perusing the Florida Photography Archives I came across this picture. 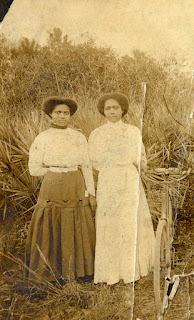 That is Aetha Broxy and her sister Sebrina Broxy Nickerson in Lloyd, Florida, taken in 19--?
Aren't they lovely? Look at those clothes!

It's been a very nice day, very laid-back. We did go down to the river and get in. There were so many people there, swimming and lounging and putting in kayaks and canoes. It was sweet and made me feel good about the diversity of my community. And the water was deliciously cold. We came home and may I point out that the saying on the front of the cookbook is one that I've heard all my life, although usually phrased as "Kissing Don't Last, Cooking Do," and after thirty years of marriage to this man it is my experience that kissing does indeed last and so do other things and tonight I'm going to make some fried green tomatoes and I don't need a recipe. Some things you just KNOW how to do and in fact, you get better at them as you go along.