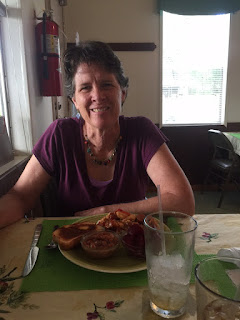 This woman saved my life today.
That's my Liz Sparks. She never gives up on me, this woman. She pins me down and makes me commit to outings. And I will never, ever be able to tell her how grateful I am for that.
Liz and I go way back. We met at the Birth Center where we both worked and I fell in love with her immediately. No holds barred. Love at first sight. She was my mentor and after the first birth we did together she took me in the kitchen to tell me about a ritual that she always did which was to say something that her old granny midwife had said after she had delivered Liz's first child at home which was, "Thank you, JESUS, for another healthy baby!"
Now Liz is no more religious than I am but she is a great, good respecter of ritual and thus it was and thus, I did.
She was with me when Jessie was born. She was there when Jessie was married. We've been through births, deaths, divorces, road trips, drunken poetry readings, birthdays, sorrows, depressions, you-name-it, we've done just about everything but get married. To each other, that is.
Which I would gladly do if circumstances arose.
But that's neither here nor there and today she took me on a mystery date. We drove down some backroads to Metcalfe, Georgia and no, I doubt you've ever heard of it unless you live around here and even if you do, you probably don't know where it is.
I had been there before, tooling around in the convertible with Mr. Moon, a long time ago. There's a huge sawmill there but not much else. But Liz had heard about a restaurant called Mary's Kitchen and that was our destination. 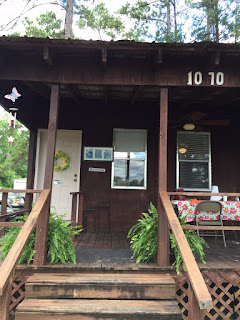 One small room with about eight tables. Not big tables either although they had moved three of them together for a large party which one family was eating at. One waitress. Who took note of you but was in no hurry. This was Metcalfe, y'all.
We weren't in a hurry either so it was perfect. The waitress finally got to us and took our drink order. The menu listed the two entrees for today. They change every day. Today's choices were either chicken and sausage jambalaya or baked spaghetti. They came with two choices of side dishes. The side dishes were as follows: buttered carrots, beets, green beans, and pinto beans.
Both of us ordered, when the waitress was good and ready to wait on us, jambalaya. I got pinto beans and green beans. Liz got pinto beans and beets.
Here's what my lunch looked like. 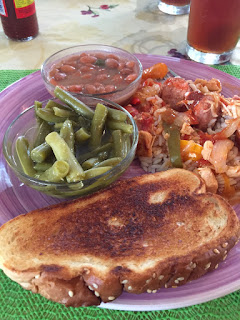 As you can see, it came with a nice slice of Texas Toast. Along with all of that and the beverage, you get dessert which today was hot homemade apple crisp and strawberry ice cream.
We ate every bite.
Guess how much it cost?
Five bucks a plate.
Five dollars, yes, you heard me.

After we ate and paid our bill, we drove around Metcalfe for a bit. 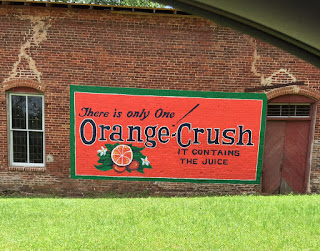 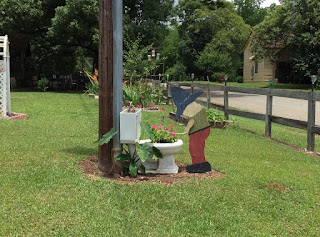 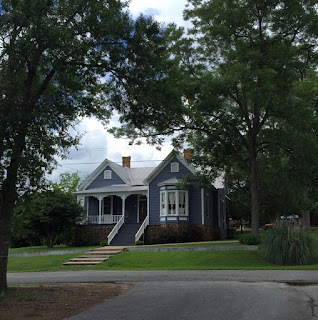 Quite a bit of diversity there and not an insignificant amount of charm. There was one house for sale that would have made Scarlet O'Hara feel at home and it was the stuff of a Southern girl's fantasy life. And there was a magnificent rose garden in the yard.
After we checked out these sights, we looked at the sawmill. They had giant machinery there that would make a little boy happier than Disney World. Pine trees were piled and stacked like toothpicks and we watched them get loaded onto giant conveyer belts to be skinned. Then we just picked a random road and drove down it. It was a red clay road and there wasn't much to see but beautiful woods and forest until suddenly, we saw a cemetery. We stopped and got out and walked around in wonder. It was old. Headstones from the mid-nineteenth century. Spread out over a few acres, it seemed to me. 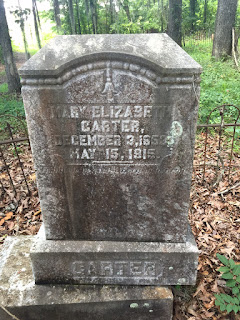 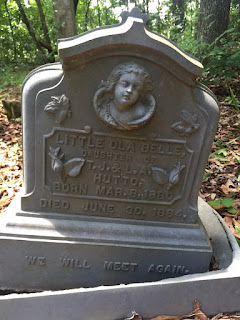 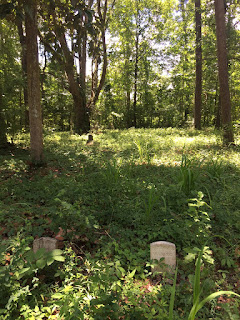 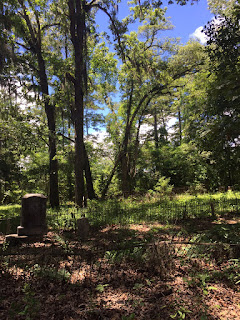 We studied headstones and formed the stories. One family had seven identical small headstones laid out in a row with nothing but names on them along with two for the parents, I would suppose. Did they lose all of their babies in one epidemic? Yellow fever? Spanish Influenza? Whooping cough? Malaria? We will never know.
The place was not well tended. There was poison ivy and Virginia Creeper and lots of other weeds I can't name. There were family plots gathered together within intricate iron fences with gates coming unhinged. 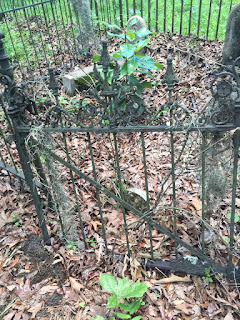 There was a blooming day lily, probably planted long, long ago. 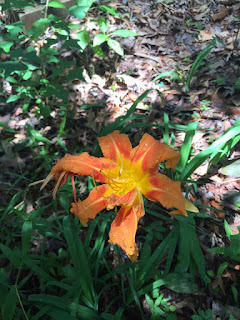 It was quiet and peaceful and I told Liz something that I read that Neal deGrasse Tyson said about how being cremated TAKES energy while burial in the ground can provide energy if done properly. I would love to be buried someplace like that cemetery. No chemicals, no lead coffin-liner. Just laid in a plain box or even just wrapped in a sheet, sunk into the dirt to feed the trees, the plants, whatever green needed feeding. A green burial.
It would make me mighty happy to think that my kids could come to a place like that old graveyard to sit on the ground to think about me, could plant roses on me or a an oak tree. I didn't used to think I wanted anything like that but as I grow older, I think that might be nice. Now if my options are either one of those modern cemeteries with the plots laid out like housing development streets with  flat small stones to make mowing easier, or being cremated, I'd choose cremation any day.
But to have my bones be part of the earth in a place like the one we saw today?
I would love it.
Waste not, want not.

There was another cemetery right across the red dirt road but it looked tended, planted, and the not-found-in-nature colors of artificial flowers bloomed forth from it.
What was the story there? At first we thought that maybe one side of the road had been for slaves, the other for white people. This is not an unusual situation here in plantation country. But no, mostly slave burial grounds were not marked with stone and iron and there were too many different family names.
Had there been an old church on one side of the road which burned down or fell down and another built across the road? There was no sign of a church on either side of the road.
Someone may know this story, but not us.
We didn't stop to investigate the newer cemetery although it looked fine in its way and the setting was as beautiful as the untended one across the road.

We had no idea where we were. Florida? Georgia? We finally reached a paved road and a sign that said Leon County and we laughed. We did a lot of laughing. Liz and I can say anything to each other without shocking the other. It's a relief and a joy to be around someone who grew up in the same crazy times you did. Although we are, in many ways very different (she, for instance, has never once turned down an adventure in her life and she IS going to go see the Rolling Stones), at the heart of it, we are much the same.

We drove down a few more roads, stopped and went out on the dock at Lake Miccosukee. Then we came back here and I gave her eggs and cucumbers, a few green tomatoes and some soup. I would have given her my chickens if she'd asked for them.

Boppa and Owen made it to the beach just fine. I bet you that Owen is in heaven. He's got his Boppa all to himself, he's got second cousins (?) to play with, and all of this too. 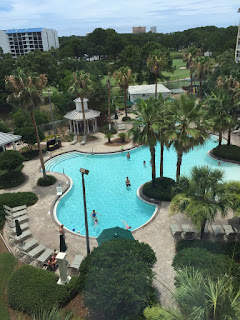 He's never going to want to come home. Except that eventually, he will miss his mama and daddy and brother. And maybe even the funk of his Mer Mer's house.

I guess that in reality, we are all where we're supposed to be or at least we can find enough reason to believe that.

I wonder where Keith and Mick and Charley and Ronnie are tonight. Probably already in Orlando. I bet you anything that the trucks carrying their stage stuff and lights and equipment passed within a quarter of a mile of my house today on 1-10, traveling from Atlanta to Orlando. And maybe those ageless boys passed right over me in their plane.

It's a small world, it's a huge universe.
I'm so glad I know some of the best people in it and that they do not give up on me. One of the things that made Liz and me laugh today was talking about how I took her to get her colonoscopy a few months ago.
"Yep," I said. "That's me. Don't ask me to come to a party and expect me to show up but if you need someone to take you to get a colonoscopy, I'm your gal!"
We all have a role to play in this life, I guess.
I feel much soothed by that thought and feel as if I have been pulled from the Slough of Despair by love and by laughter and some of the best pinto beans I've ever eaten in my life.