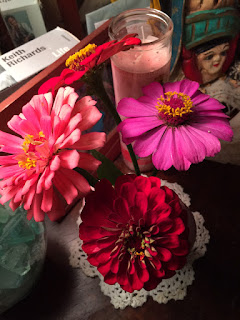 So we were eating our delicious lunch at Japanica! today and I am not sure how it came up but the word "gay" was said.
"Do you know gay is, Owen?" I asked him.
"No," he said.
I started to go into a longish explanation and Hank cut in.
"If a boy falls in love with a boy or a girl falls in love with a girl, that's called gay."
"Oh," he said. "Can we talk about me now?"

I had the best time today. Hank and Jessie and Lily and the boys and I had our lunch and then we went to Costco where we dawdled down the aisles and talked about all the stuff we'd like to get but mostly don't. I love these outings. I feel like the matriarch I am with the grandchildren, the pregnant mommies, the son. We go in the coldy room, we shiver with great exaggerated shivers, we discuss whether or not we'd like to all split up one of these trays of nectarines and can you use some Romaine? We laugh, we peek at babies, we discover that you can buy a toilet for $84.95. We joke, we talk about how we could eat an entire box of whatever looks good and junky. We hold up ginormous containers of things and say, "Could you use this?"
Oh my goodness. What first world pleasures. Still, pleasures they are and I am not ashamed to say that one bit. We are gatherers and the Costco is air-conditioned and if we had to gather outside, we would die.

Speaking of which- how do those sidewalk builders do it? They work in this heat for over eight hours a day in high rubber boots and long sleeves and bright orange vests. They are soaking wet by the afternoon. I bet they go home and pour water from their boots, every bit of it from their own pores.
Of course, the two men who are doing most of the work are Mexican. They probably wonder why we're not doing it like they do in Mexico- rest during the heat of the day, work in the night time when it is cooler.
It seems ridiculous that we do not. Here in Florida, especially. I am in awe at anyone who works outside this time of year here. I simply do not understand how it can be done. Humans are far stronger than I can imagine. Some humans. Not me.

So. This Rachel Dolezal thing.
You know, I don't even know all of the details and I am not about to cast judgement. I just think that the whole situation brings up an amazing wealth of new questions about what we call race and privilege and culture. It's not unusual here to see women who are no doubt Caucasian who have married into Black families and who seem to have assimilated pretty thoroughly and yet, they do not seem to be Black themselves, just part of that culture. They have not darkened their skin nor permed their hair although they may be wearing dreads or locs. That doesn't seem like a big deal to me.
People assimilate into cultures ALL the time. Ex-pats who move to different countries, people who move from NYC to the deep south or vice-versa. Catholics who become Jews. Jews who become born-again Christians. Nothing wrong with any of that.
Sometimes we are raised in one culture and find another in which we feel, finally, at home. We should be free to adopt that culture if we please.
And as we all know, I'm extremely comfortable with those who feel as if they were born into the wrong bodies due to gender issues. I support those people with all of my heart if they decide to make things right.
But.
Mmmmm....
Is this because it's a race thing? I know that Black people have "passed" in our culture for many, many years. Does it show a prejudice on my part because I don't even question that? And what IS race? What's the deal with that? Why do we call Obama Black? He's as much White as he is Black. Are we still doing that "one drop" thing where if you have one bizzilionth of African heritage as a percent of your blood you are considered to be Black? Doesn't this almost ensure that most of us ARE Black? And if you turn it upside down, aren't most of us White?
See? I don't know enough about any of this to really know how I feel.
I suppose that part of the problem in this case is that Ms. Dolezan misrepresented herself in ways that were not at all honest or truthful. The perms, the darkening of her skin by whatever means, her direct claims that she is, indeed, Black. The fact that she (according to what I've read) has claimed that "hate crimes" have been directed towards her. This is all troubling.
But it's so interesting, you know?
The situation is making me THINK about things. Mostly, to tell you the truth, about what is race and what is culture and what beliefs do I hold, even subconsciously, about race and culture?

When I asked for thoughts on the situation this morning, I got some incredibly thoughtful ones. I knew I would. And as Elizabeth said, I don't really care what anyone claims to self-identify with. It's not my job. Although- hold on! I don't want someone who "self-identifies" as a doctor but who really only has a high school education to be doing surgery on me or anyone I know. Is that in any way related?

See? It's like a giant onion of a conundrum here. At least, it feels that way to me. Am I over-thinking it? Wouldn't be the first time. But whatever is going on here, at least I've met a situation where even at my age I don't have any real immediate reaction and every question I ask leads to more questions. I find this encouraging.

Now tomorrow we may discuss the caliber of the Republicans who have announced candidacy for President. I'm not in much doubt about how I feel about that. In fact, to discuss it would probably be a big fat waste of time.

All right. I have to go make supper. But I would be VERY interested in your perspective on the issues that Ms. Dolezan's "outing" (is it an outing?) have brought up.

Because honestly, I just don't know quite what to think.