Saturday And No, I Don't Really Have A Point Here

Here's a little video I got last night.


We miss you so much and I'm having ice-cream.

I just talked to Mr. Moon and he told me that last night Owen went up to his cousin who is only a few months older than he is and he got very close, face-to-face, and he said, "I want to say something."
And she said, "Okay, you can say it."
"I love you," he said, and then they hugged and Mr. Moon died of the sweetness.
I don't think I've ever heard my husband sound so completely thrilled about anything in his life as he sounds about being able to take Owen off on that little trip.
"I finally got to have MY time with him," he said. And if that isn't the best, I don't know what is. Because of our situations, it's been me that's gotten to spend the most time with those boys and Mr. Moon hasn't resented that. He's known that that's the way it had to be. But he's always said, "I'll get my time."
And now he has. At least a little bit of it.

Ah well, the day is going by so quickly and I've done so very little. It's hot and steamy, the recent rains adding to the sauna-like effect of it all. I need, at the very least, to clean out the hen house. The weather thing says that it's 90.2 degrees but that it feels like 101.
Yeah. Whatever.

Maybe when Mr. Moon gets home we'll drive down to the river and jump in and cool off. Or he may be ready to just sit in his chair and rest up from his adventures.

On a completely different note, my favorite on-line quote from last night's Stones concert was: "They are not human."

The red zinnia opened up. 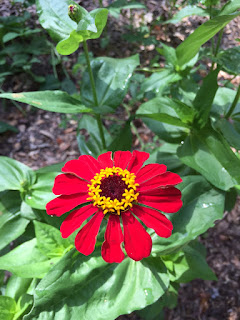