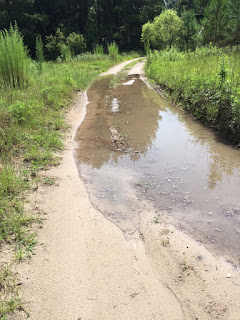 When the rain finally quit, I put on my shoes and took off out the door and the streets were already literally steaming. The dirt paths were laked in water and I chose my route to visit the old graveyard and then turned around and realized that I was pretty much done with another mile or so to go.
I made it but it wasn't fun. 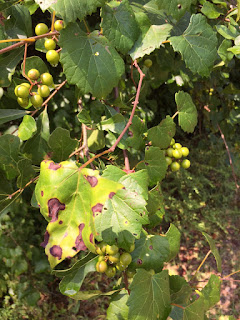 I'm not seeing blackberries this year but the wild grapes are abundant. I need to research this situation to see if they'd make a jam. They don't get big but I suppose if I picked enough, I could do something with them. Seems like a sin to let them go to waste. I have them in my own yard, the vines blanketing the trees.

I think I give myself a little bit of heat stroke every day that I walk. Okay, probably not "stroke" but heat exhaustion, for sure.
Every time I went out today, whether to gather eggs or hang clothes, I felt worse. Finally, around four, I laid down and slept for awhile and when I woke up I didn't know if it was day or night.

My baseboards remain unmolested by any sort of cleaning but I did some pretty good sweeping and washed rugs. Hung out four lines of laundry and it all dried in an hour. Faster than using the dryer these days. I just went out and picked more tomatoes and green beans. I'll be cooking supper here in a little bit. It's been another one of those days of not much. I got a text from Lily. Owen had his physical today and he is, according to the doctor, in "perfect health" and over the 100th percentile in both weight and height for his age. Since he's a skinny kid, I would imagine that those two are nicely proportional. His height is projected to be 6'4" but I'm betting he grows taller than that. Damn. I hope I live long enough to see that boy grow to his full height. I love those boys so much. Yesterday Owen and Gibson were running around the house, chasing each other and Owen ran into the door frame from the hallway to the dining room. I saw him do it and there was a moment of silence and then he wailed. He got a pretty good bruise and a scrape and when he calmed down, I said, "Can you move your arm up and down?"
He proceeded to demonstrate that yes, he could, by whirling his arm around like a speeding windmill, faster and faster, until I told him to please stop.
"I'm not a professional," I said. "But I'm pretty sure you didn't break anything."
Gibson kept calling himself "Hulky" as in...the Hulk but in Gibson-speak, the way he calls Hank "Hanky." It made me laugh. This little boy with his raspy old blue's man voice. "I HULKY!"
I started calling him "Hulkito" but he didn't get it.
"I HULKY!" he insisted. "RED HULKY!"
"Hulkito Rojo!" I said. He just looked at me like I was crazy.
Well, I am.

I will see them again tomorrow as I'm going to go stay with them while their mama goes to see her primary care physician. They are such a part of my life. When I had my own children, one of the things that amazed me was that it seemed, once they'd been born, as if I'd known them forever. I know that this is not a unique way to feel. That many parents feel this. And it is much the same with these boys. As if I had just been waiting for them to arrive in their bodies to fulfill what I had always known to be part of my life.
This makes me so eager to meet the new ones coming. I think I know them already. And oh- the joy I'll feel when I can see them, hold them, watch them in their mothers' arms.
Yesterday I kissed Jessie's belly and spent a few seconds with my head right there on her, sending my rays of love to the little boy. I may be silly, but I think I felt my love-rays make their connection. Jessie is gracious to allow me to do this.

And so it goes here in the hot summer and it truly is summer now. The solstice was yesterday and yesterday was exactly three months until Jessie's due-date. The wild grapes grow and the rains come and dissipate and the steam from the streets rise up into the lower hanging branches of the ancient live oaks. Mothers' bellies swell with the growth of their babes, grandmothers pin clothes on the line and pin dreams to their daughters' bellies, just as they once pinned dreams on their own bellies; these dreams which just now reach fruition.
I love the feeling of fat tomatoes and warm eggs in my palm, the feeling of my palm on those growing bellies. I love roundness. My husband's strong shoulders, the heads of my grandsons, the peach I palm to peel and slice.

Summer is the season of roundness. It is not an easy season here in North Florida where the heat can overtake you but it has its beauty and fecundity. When I stepped into the old graveyard today I felt as if I was in a dream, the deep shade and quiet stones, a very, very small cave of cool shade and peace, three steps away from the steaming road.

So it is and so it has always been and here we are, right in it.

Time to cook the green beans and slice the fat tomatoes.