If This Isn't Sweet, I Don't Know What Is 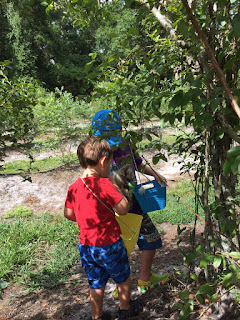 The boys were incredibly good today and hardly complained at all about the heat although it WAS hot but the blueberries were ripe and full and between us all we picked around seven pounds. The price of them is barely worth going to all that trouble- they are not cheap- but it is the experience we pay for, I think, not to mention supporting the hard-working owners of the berry farm. Women and children were picking and some of the children were teenagers and I did not see one person on a phone and as we went down the rows, I heard conversation and Lily and I talked and talked, our fingers busy doing one thing, our minds and mouths another.
Speaking of mouths, Gibson ate quite a few but no one minded.
Owen said that he wants to live on a farm. He wants berry bushes and chickens. We told him that he can do that when he grows up if he wants. And he can.
We figured we'd all had enough after about forty-five minutes and took our buckets of berries up to be weighed and when we left we drove another few yards down the road to the Wacissa River. 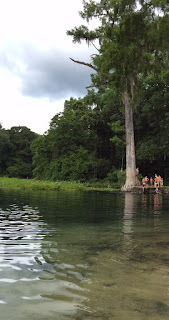 This is one of those spring-fed Florida rivers which are ice cold and clear as gin. Mothers sat on blankets on the bank while children swam and played in the water, boys took turns swinging off the rope swing to splash into the river. Babies toddled in the clear, cool, shallows, chasing minnows. I even got in, all the way, quick-quick, and it felt delicious, my core temperature dropping immediately into something far more tolerable than it had been a moment before.
Owen wanted to swing off the rope but neither his mother nor I thought that would be a good idea. He cried. We told him that we'll be back with Daddy or with Boppy and that then he could swing and jump. And we will.

We came home and changed clothes and got back in the car and drove to Monticello where we ate at the Mexican restaurant and I dropped off my bags of clothes at the humane society thrift store and then we did our shopping at the Winn Dixie, as there is no Publix in Jefferson County. When we got into the store, while Lily was getting her cart, Gibson jumped on one of the motorized carts that people can ride and before we could do a darn thing, the child had started it up and run right into a flip-flop display and I laughed so hard I almost peed my pants.
Lily laughed too although she tried so very hard not to.
"That is not funny!" she told her son. "Don't listen to your Mer Mer laughing. It was NOT funny."
Etc.
He didn't say a word. He knew he shouldn't have done it. He also knew he got away with something very, very fun and was content to sit in his mother's cart as we shopped but I think he was smirking to his three-year old self the whole time.

When we got back here, I discovered that a friend of ours had dropped off a bag of gorgeous tomatoes and some okra and hot peppers. I felt richer than Midas. I changed my supper plan and made a tomato pie and sliced up the okra and dipped it in egg and milk, then in flour and cornmeal, and I am baking that along with the pie. 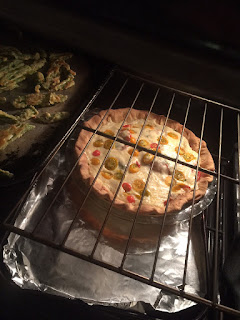 I've sliced cucumbers and onions and covered them with vinegar to go with.
Summertime.
Only thing we skipped was watermelon.
Next time.
Not sure I've ever had a better Tuesday in my life.