Lily and the boys and I went to pay a very short visit this morning to Lily's dear friend who gave birth last Thursday. I actually don't believe it's the right thing to do to visit brand new mamas unless you are only dropping off a meal and I wasn't but I so wanted to see this new child. He could not look more like his mother if she had cloned him and she herself looks that much like her own mother.
Strong genes there!
He's gorgeous, that little one, and we stayed just long enough to confirm that and then we left and met Hank for lunch at an Indian restaurant and I wasn't feeling very well, to be honest. Usually when I eat Indian food I want to rent an extra stomach so that I can keep eating but today it just tasted salty to me. Not that I didn't eat an entire plate. I did.
I'm not dead, y'all.
After lunch, the boys and I drove Boppy to the car rental place at the airport so that he could get his rental car to drive to Orlando. He drives a rental down and drives back in something he buys and every week it's a struggle for him to find a ride out to the airport and I didn't mind going. It was fun to have the boys along. They were, uh, talkative.
"Boppy! Boppy! Boppy!"
"What?"
"Boppy!"
Etc.
Gibson claimed he had to pee halfway there (it's about eight whole miles) and Owen said he had to as well so we stopped at a convenience store and their grandfather took them in to use the bathroom and he said it was filthy and Gibson didn't really have to pee and I don't think he enjoyed the experience that much but he did it cheerfully enough.
After we dropped him off I drove the boys back to their house to stay with them for a little while and on the ride, they started talking about their dad.
"He's disgusting," said Gibson which made me laugh because first of all, I had no idea that Gibson knew what the word "disgusting" was and secondly, because Jason is so NOT disgusting.
"What does he do that's disgusting?" I asked. I had to ask. You know I had to ask.
They told me that he farts.
"Everyone farts," I said.
"Not you," said Owen.
"Yes I do," I said. "EVERYONE farts."
"Well he does it a LOT," said Owen whom, may I point out, will never, ever grow tired of telling the story of Boppy telling him to pull his finger.
Is all of this TMI? Am I shaming my family?
Oh hell. Everyone does fart. That is the truth of it. Gibson and Owen are no exceptions to that rule, trust me.
Also on the way back I saw a sign at a church and it said something like, "Staying in bed and saying 'Oh God' is not the same as going to church."
Did that mean what I think it means? That staying home and having a nice little Sunday sexy time is no substitute for church? I laughed at that too. And frankly, I don't believe it. But you know me- I think that weeding the garden is better for the soul than going to church so there is that.

Anyway, after their (absolutely not) disgusting father came home, I got in the car and drove back to Lloyd and took off my bra-like garment and put on my cargo shorts and went out and took a few pictures. 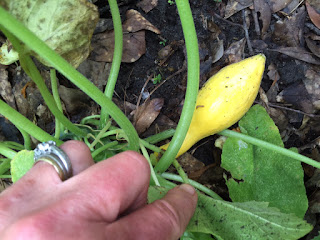 A little yellow squash that will be ready to eat in a day or two. 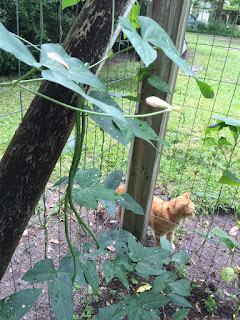 Portrait of yard-long beans with an orange cat who just happened to be walking by when I took the picture. 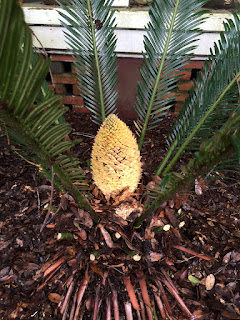 The cone of the male sago palm. Isn't it a fine and sturdy thing? It will grow even more manly in the next week or so. 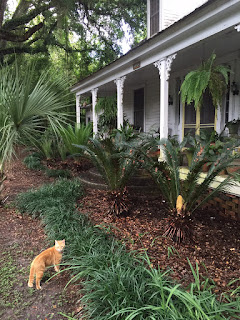 Sago palms and porch with an orange cat who just happened to be walking by. Such a coincidence! Every time I turn around, there's Maurice! It is quite simply the strangest thing.

This morning I watched as Mama Hen did another child-education activity. She took the babies out and then left them where they were and must have told them to stay while she went and scratched with the other chickens for awhile. They chirped and chirped but didn't move and she kept an eye on them from a few yard's distance and the exercise didn't take long. She soon came and claimed them and they went off to explore the offerings of the ivy again but I am finding this fascinating, watching her teaching them how to be on their own, one very small step at a time. They still try to sleep under her wings although they are really much too large and she still lets them. I wonder how long that will continue.
Camellia is still laying an egg a day by the tools in the garage, seemingly completely unfazed by my collecting and tossing that pile of her eggs into the woods.

And now the shadows are growing longer. It rained again today and when I got home, the sky was angry-looking and it was thundering off to the south but it seems to have passed. The sun is out again, albeit growing lower in the sky, sinking beneath the trees.

Because I can't stop myself from being outside, here are a few more pictures I just took. 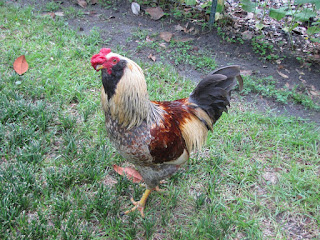 Mick the rooster. He is so much like his namesake that it makes me laugh. He is not the largest rooster in the world and he is a bit odd looking in some ways but he is quite possibly the cockiest little son-of-a-bitch you'll ever want to meet and he has some extremely fancy dance moves. 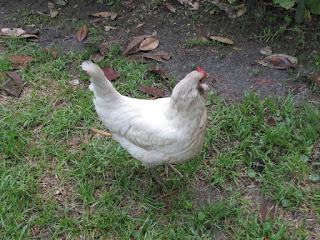 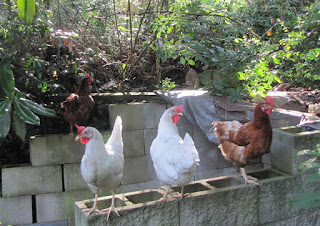 Nicey, Cha-Cha, Chi-Chi, and Lucille, posing in the light of the setting sun.

And here I am, home after a day of adventures and as always, when I drove home and got to the boundaries of Lloyd, my breathing slowed and my heart was made happy and when I pulled into my driveway and was greeted by chickens and duck and cat, I was at peace again.