It May Not Be Earth-Shattering But There Is Earth Moving 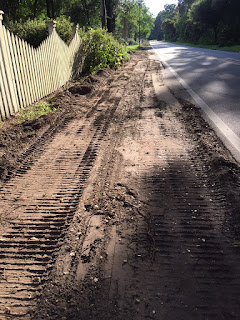 When I got home this morning from my walk, there were three guys with a machine that I guess did what you see above. They hadn't done it yet but they were fixing to.
"Y'all making us sidewalks?" I asked them.
"Yep," the older guy said. "We sure are."
"When are they going to be done?" I asked him.
"Oh, next week," he said. Then he looked at the other two guys and busted out laughing.
"Well, we'll really get started next week," he said.
"Okay," I said. "Be seeing you."
I walked on into my gate and came in and took a shower and went to town and when I got home, it looked like that. I hope the boys can put their handprints in the sidewalk. I wonder if we're going to have a curb. If not, people are just going to drive on the damn sidewalks. I know Lloyd.
Saw the Sheik this morning.
"Where you been? You been okay?"
"Aw, I've been busy," I said. "And yesterday I walked down to the county line instead of my usual walk."
"Oh," he said. "Then he repeated, "You okay? Everything all right?"
I was so filled with sadness and feeling worthless and being anxious and all that crazy bullshit that I didn't even know what to say and besides that, just having him ask me that almost started up the tears.
"I'm fine," I said. "Everything's good." Because you know- everything IS good. So good.
"All right," he said.
"And you?" I asked.
"Yeah, I'm fine."
"Okay. Take care."
"You too."

I wonder if he is fine. I know he's had several heart surgeries. I know he can't be real okay. Makes me feel like a damn whiney butt wussy to complain to the Sheik. Do you realize I don't even know where he lives? I know where his brother lives. I know where his sister lives. He must live somewhere nearby but I don't know where.
And yet, it's so odd how I feel a connection to him. Maybe just because I've been seeing him around for almost forty years. I mean, I didn't live here that whole time by any means, but that's how far back I remember seeing him. But I'd never say, "Oh, you know. I suffer from anxiety and depression. Today's a bad day."
Never.
I might possibly someday say, "Oh, you know. I get my spells where I'm down."
But I probably won't.
And he'll probably never tell me, "Oh, I'm having angina and the doctor says I might need another surgery."
Nope. Not gonna happen. He's going to wear his sunglasses and his hat and he's going to carry his walking stick and he's going to be cool and I'm going to wear my men's baggy cargo pants and carry my little dog-fennel stem and we're going to meet in the road and we're going to exchange these greetings and that's the way it is.
But somehow I so often feel that more gets said than what comes out of our mouths.

So it's been a day. I was the chicken-and-dumpling fairy and dropped some off to the new mama and to Lily. Owen's very excited that they're coming over tomorrow. I'm going to be feeding them supper and I asked him what he wants. He wants either:
1. Steak
2. Pizza, or
3. Pancakes and bacon.

I went to Fanny's and had lunch and got to see May and Taylor and Michael and I went to the library and to the nursery where I bought organic pesticide and organic fertilizer. I went to the grocery store where I bought bacon and a frozen pizza. Mr. Moon is not home yet from the sea but if I can believe a picture he sent me 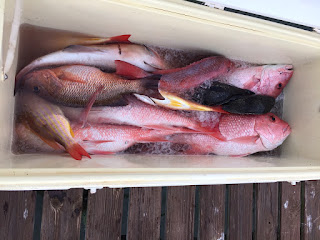 they did indeed catch red snapper. That's going to be a good supper.

Here's what I'm having tonight. 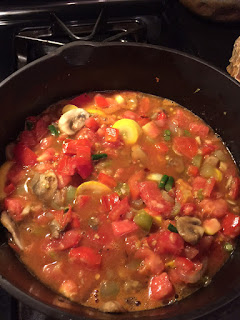