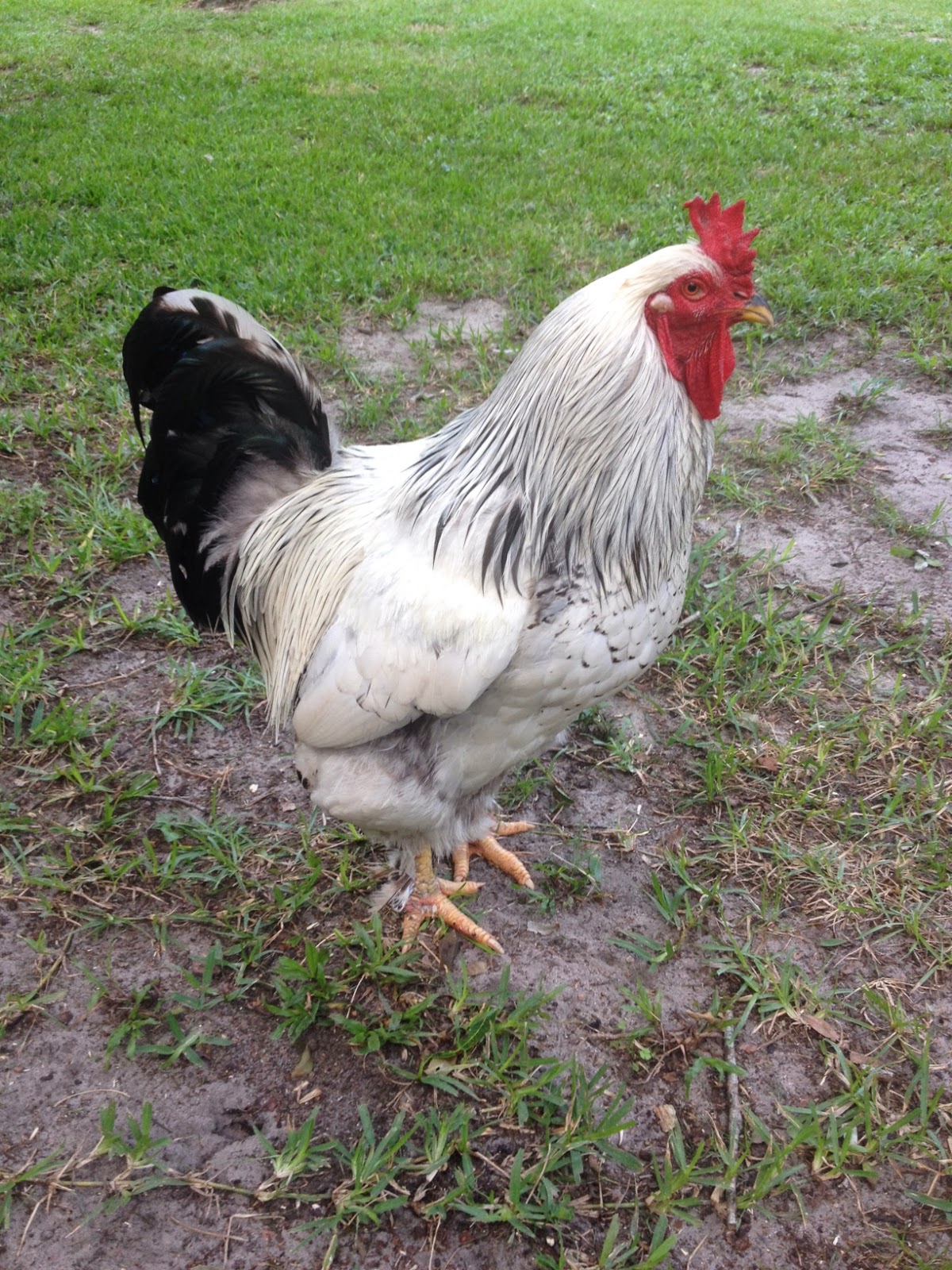 No, I am not going to eat Elvis.
Jessie texted me this morning that she wanted a picture of Elvis to show to her friends. I went out and took that one and it was easy to do because as soon as I went outside, Elvis ran to me to hit me up for any treats I might be holding in my pockets.
I had none but he was very accommodating anyway, posing for his pictures. Honestly, I sometimes think that he knows what I'm doing and loves to have his portrait taken. 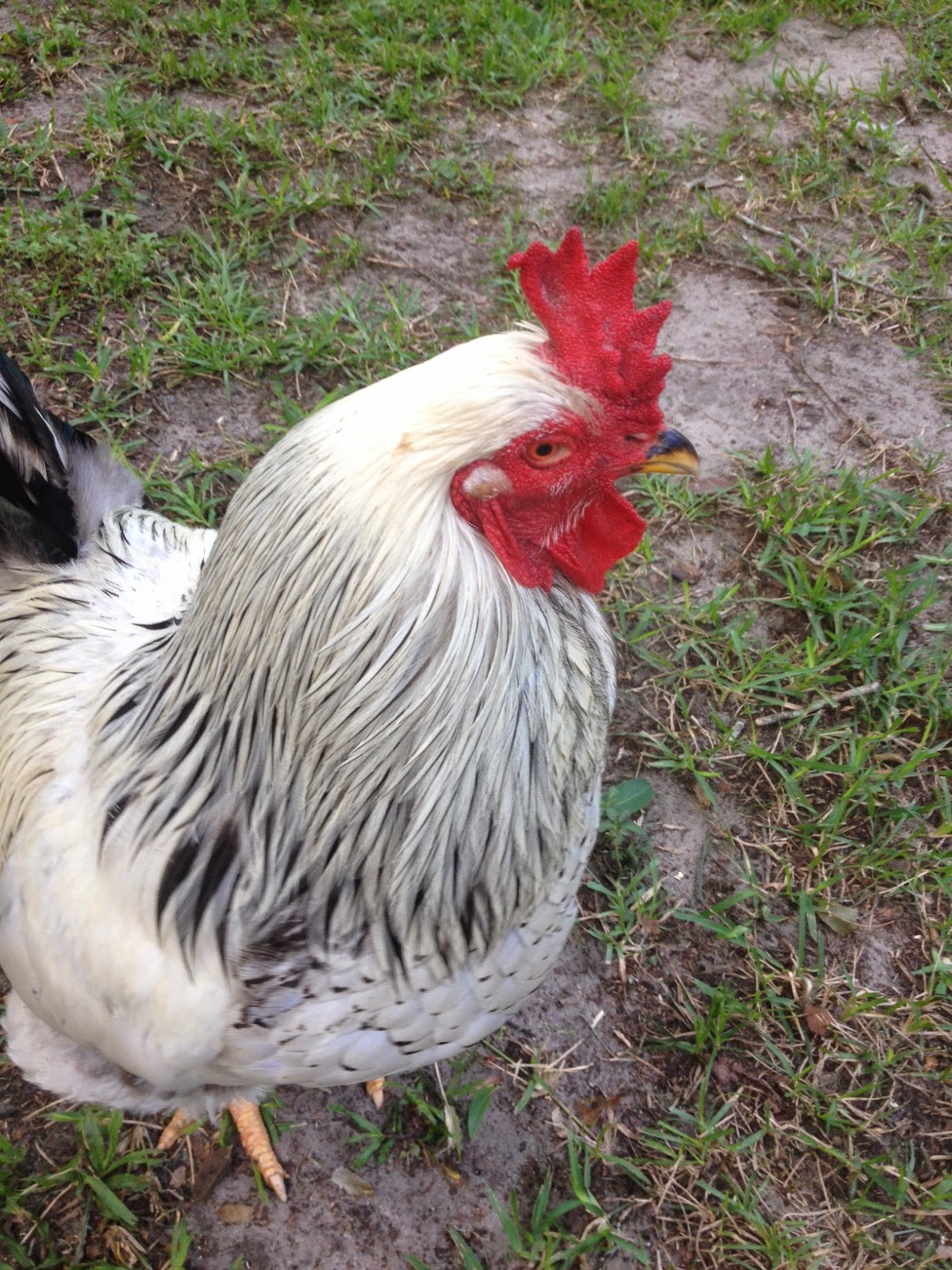 This is the same look that parents give to their children. It is the look which means, "If you even think about whining about what's on your plate, you've got another think coming."
Or something in that vein.

I've already seen him respond to Chi-Cha's egg-laying cackle this morning. He's a very busy rooster these days with seven extra hens to protect, watch over, keep with the flock and provide sexual satisfaction to.
Not that the hens ever really seem to enjoy the sexual congress but what do I know?
I should probably start giving him extra treats so he can keep his strength up.

Speaking of dietary intake, I am drinking a smoothie. Haven't had a smoothie in more than a week. I was too busy eating bread and cheese and oh yeah, that breakfast in Asheville at the Five Points which was a Big Girl breakfast for sure with eggs and bacon and biscuits the size of a newborn's head and fried potatoes. Man, that was good. I don't know about you but a great part of traveling for me is eating foods I don't normally eat and I sure did a lot of that in Asheville. Even when I ate yogurt, I was eating the stuff with full-on cream in it. That kale I ate? It was too delicious not to have been drenched in something that probably negated all of the green kaley goodness.
Here's the thing- I know too much about nutrition to be able to fool myself about what's actually good for me and what's not. That just because something is a "salad" doesn't mean that it doesn't have more fat and calories in it than a cheeseburger. Oh sure, it has some fiber in it that the cheeseburger doesn't but let us try to be aware of these things.
And I chose quite deliberately to enjoy whatever I wanted and I did but now it's time to pull back on the reins and make better choices.

I dreamed last night that I was addressing a Weight Watchers meeting. I actually said the words, "This is a scam!" And then I corrected myself. "It's NOT a scam. It's a good program to help you learn how to eat properly and you will lose weight on it if you follow the program but you can't live that way forever, tracking everything you eat, estimating portions, feeling guilty if you don't." And then I believe that in this dream-world Weight Watchers meeting I told the group all about "eating all healthy and shit" which I define as not eating processed food and eating close to the dirt and eating all the vegetables and fruit you want but eliminating as much refined sugars and grains and red meat as possible.
Wish I had a video of that dream. I need to follow that advice.

I sort of know a woman who is doing a raw vegan thing and I'm worried about her. She keeps track of every single bite she eats every day and it just doesn't seem to me that she's getting nearly enough protein OR calories, for that matter. I see almost no source of B-Vitamins in her diet and maybe I'm wrong about this and maybe she's getting everything she needs but it worries me. Lily's doing a vegan thing right now but not raw, for sure, and I know she's getting what she needs and she's enjoying her food tremendously. She eats plenty of beans and tempeh and tofu and whole grains and vegetables and fruit and nuts. And when you eat like that you don't have to count calories or even worry about portion size. In my experience, a smallish bowl of beans and brown rice will fill you up nicely and how much salad and roasted cauliflower can one person eat? If you eliminate dairy and all-formerly-living creatures from your diet, it's pretty much a sure thing that you'll lose weight but you can do it in such a way that it's tremendously healthy for the body and enjoyable too.
Food is good. It tastes good for a reason. Not Doritos. They taste good because they're filled with fat and strange chemicals which for some reason our tongues adore. But you know what I mean. And I'm not giving up my monthly pork chop or my seafood or my venison or eggs but I sure could do with less cheese and I love to cook and it's a big part of my life, the chopping and mixing and preparing and simmering and so forth. It satisfies something in my primitive woman soul to cook. It's like the keeping of chickens, the (lately futile) attempt to grow some of what I eat in the dirt where I live.

As almost all women in our culture have, I have flirted with eating disorders in my life. I learned about a new one today. Well, it's not a new disorder, it's just recently been named. Orthorexia nervosa, which is a disorder characterized by being concerned with healthy eating to the point where it becomes an unhealthy obsession which can ironically lead to malnutrition and social isolation. Here's a link to information about it.
I have definitely suffered from this disorder in my life. When faced with the choice of no healthy (to my way of thinking) options for eating, I have simply not eaten. Or eaten something ridiculous like a side salad of lettuce and tomatoes and carrots with no dressing for a meal. And would feel terribly guilty if I ate something I didn't perceive as healthy. It seems to me that eating disorders can be insidious and although I have no proof to back this up, I have observed both in myself and others that after a certain level of what I can only call the starvation-level restriction of calories, something happens in the brain which shuts off normal appetite and the enjoyment of food in any way. I believe it's the body's response to what our ancestors experienced during times of dietary deprivation caused by the simple lack of food available at times. The brain eventually had to shut down the hunger sense in order not to go insane but of course, when food did become available again, let's say the hunters bagged a wooly mammoth and dragged it home, and the body received calories and nutrition again, the brain switched the hunger urge back on so that plenty could be eaten, up to and beyond the point of satiety so that extra calories could be stored as fat for the next period of starvation. This is one of the reasons that we, as a species, have been able to survive.
Our bodies still work this way even though we don't, as a rule, suffer periods of starvation unless they are self-imposed. Not in our culture.
Once again, our biology has not necessarily caught up with the circumstances of our lives in this modern world of (again, for most of us) abundance as applies to food and food choices.

I'm never going back to thinking of food in black and white terms again. Not only do I not have the tolerance for it, I simply don't want to. One thing that I really believe that Weight Watchers taught me is that we should all eat a wide variety of foods. Each food brings something to the table (no pun intended) that no other food does. Kale is good but so are collards and mustards and turnips and spinach and arugula. Blueberries are fantastic but strawberries and cherries and apples and peaches and watermelon and citrus all offer different nutrients and flavors. Walnuts are healthy but so are pecans and almonds. Brown rice offers one sort of nutritional benefit and quinoa another. Olive oil and coconut oil are good fats but butter can be okay if used sparingly.

And whenever we get into a rut with our foods, we are not only depriving ourselves of the joy of good eating, we are depriving our bodies of different vitamins and minerals and fibers and all that good stuff.

And every fucking week there's a new superfood whether it's acacia berries or flax seed or oat bran and the next thing you know, they're selling us new and very processed foods which contain these so-called superfoods from cereals to juices to nutritional "bars" to  I don't-even-know-the-fuck what. Which is bullshit and just another marketing tool for the food processing companies to make millions off of while offering us nothing but some sort of belief that we're being healthy.

I swear to you, Michael Pollan got it right when he said, "Eat food. Mostly plants. Not too much."
And when he said food, he meant real food and not some processed crap that your great-grandparents wouldn't have recognized as something to eat.

So okay, I've written this mostly for myself and thanks for listening if you still are.

I'm going to go check on the morning egg-production and see what I have. Remember when eggs were vilified as being the cause of high cholesterol? Sure, maybe, if you eat four a day.
With bacon. And biscuits.
But on their own, they are an almost perfect food. You might even call them a superfood.

And they're so pretty.

Elvis agrees with me. Some corn, some bugs, some tasty shoots and grasses, some grapes and watermelon and stale crackers and hell- the occasional beak-full of catfood. And I don't mean this to be glib. The healthiest pets and the most long-living ones I have known (and you know I have known some long-living pets) have eaten probably inferior dog or cat food along with table scraps. And the occasional deer liver.
Which may, in fact, be the healthiest damn thing to eat on the planet because my pets never die.

And if that turns out to be true, they'll be processing deer liver and putting it in capsules for us to swallow with our morning coffee when all along, we're probably supposed to eat it the way my animals do which is right out of the deer and raw.

No. I am not going there myself but feel free.

Go eat something good. I'll leave the definition of "good" up to you. But for god's sake- enjoy it.