The Moon May Be In Broody

Lily and I had more fun than one would reasonably think that two women could have merely doing some shopping but I'm telling you the truth- we did. We laughed at all the junk food in Trader Joe's which, because you know- it's organic or "natural" people probably eat thinking it's good for them but condensed cane juice is sugar, y'all, and there's no getting around it. We bought some produce and looked longly at the purple roses and all the beers and the guy at the cash register was darling and when we left, he said, "You ladies have a nice day!"
And we did.
We trundled on over to Costco and were both starving and they weren't sampling one damn thing so we bought our berries and olive oil and cucumbers and green beans and didn't buy one crazy thing. We were good girls.
Then we went to her house and put all the cold stuff in her refrigerator and grabbed up Gibson and went and picked up Owen from school. He was happy to see me there and showed me around his school and I met his lovely teacher and met a few of his classmates, Martin and Brian.
We got in the van and drove to JAPANICA! the sushi, noodle restaurant with the cozy sofa and we spent some time on that sofa, the boys and I. The sofa is in the bar area which is pretty much deserted during the day and there's a disco ball in there too. Owen told me he was going to have his birthday party there which sounds like an excellent idea to me. Far better than Chuck E. Cheese or Cheeze or whatever that rodent crackhouse is because not only is the food a hell of a lot better but there's a full bar AND the disco ball AND the world's comfiest couch so I was all about that.
I told Lily of this plan and she wasn't so sure about it. "Who's going to pay for that?" she asked.
"Everyone can pay for their own," I said.
She looked at me skeptically.
Well. I think it's a good idea. What five-year old wouldn't want his birthday party in a Japanese steakhouse bar? It's PERFECT!
We looked at the fish in the restaurant (two different tanks!) and the swords on the walls and the pictures of sumo wrestlers which Owen insists are women. "Those aren't really titties," I told him. "They're just really large men with big chests."
Then HE looked at me skeptically.
No one believes me.

After our delicious lunch I collected all my groceries from Lily and got about a hundred kisses and came home and it occurred to me that my whole attitude and mood had changed. I was feeling so much better than yesterday. Incredibly better. The change in weather seem to portend good things rather than simply remind me of what can never be retrieved and I felt so stupid and yet, not stupid, that I am at the mercy of such a flow of emotions and chemicals as I am. And I washed dishes and made the bed and that looked so good I laid down and took a nap and when I woke up, I felt a bit...not so great again but better than yesterday, oh yes, still better, and why, oh why, is it like this?
I have no idea but fuck it. I'm definitely on a livable level and it's been a beautiful day and I'm going to hang my hat on that.

Here's Missy, sitting on a sturdier basket, back in the pump house. 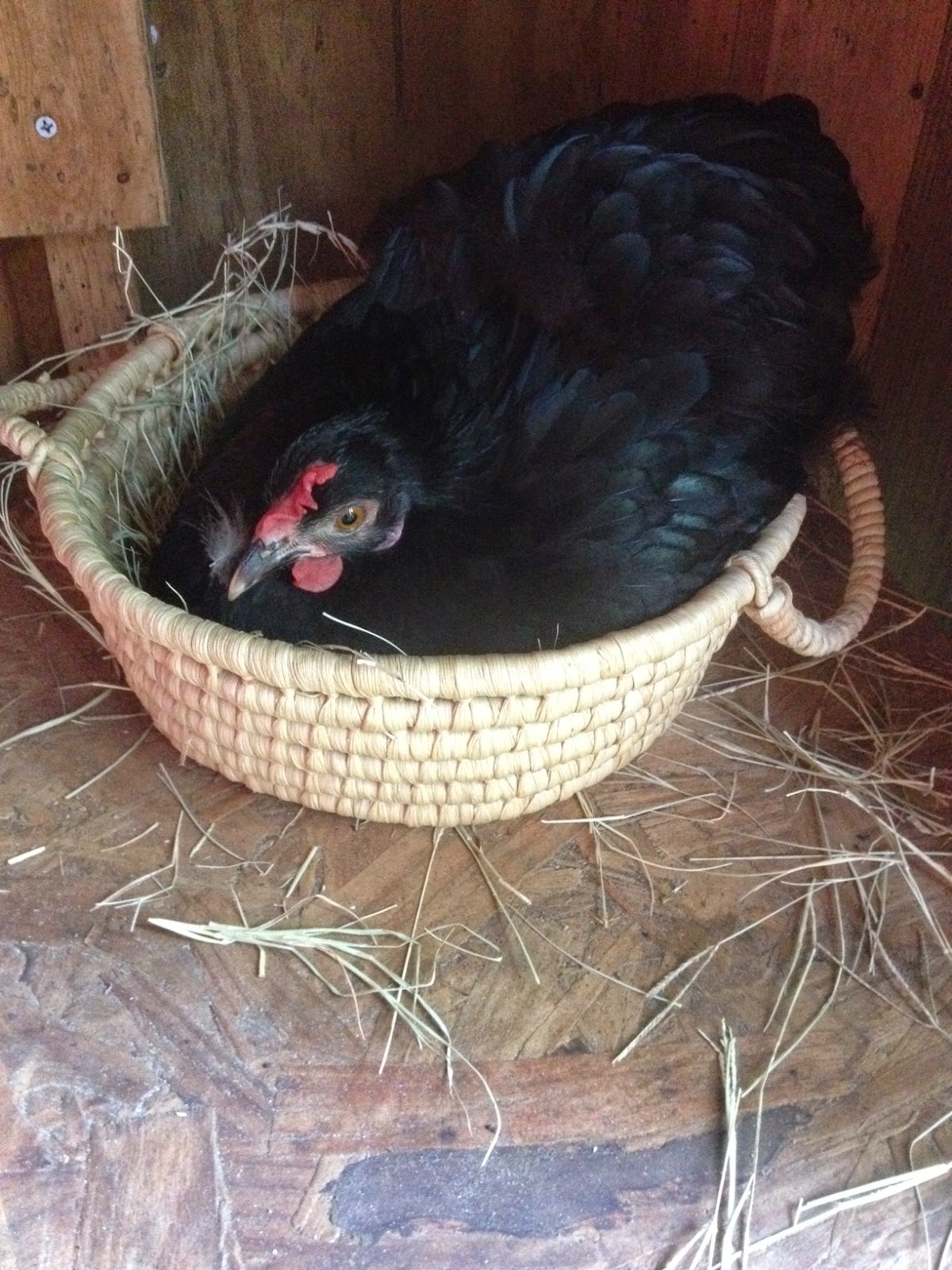 I found her back in there today, just sitting on the bare shelf and took pity on her and found her that basket and set her in it but bless her heart, she cannot spend the night in the pump house where any coon or possum can snatch her and I feel that the next few days are going to be difficult with that little hen. We shall see where this leads.

We shall see where it all leads, won't we?