You know, today has been one of the best days I've had recently. I almost wonder if I accidentally knocked my head out of my ass when I fell last night. Sort of a unconventional treatment for head-up-the-assedness syndrome.

I got a lot of stuff done around here and then I went on into town and dropped off a little present for Hank that I'd bought him along with a dozen eggs. The present was a book which he had adored as a child. We got it in the Monticello library when he was about three years old and he checked it out so often that the librarian finally ripped the library sticker out and handed it to him.
"Anyone who loves a book this much should own it," she said, and I fell in love with her and we were friends for years.
The book was one of Lois Lenki's and I love all of her books. Their simplicity of word and illustration and design seem so perfect to me. This particular one was entitled "Mr. and Mrs. Noah" and is the story of Noah's Ark. 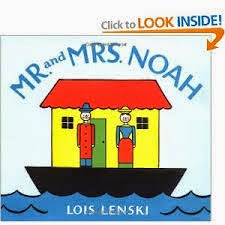 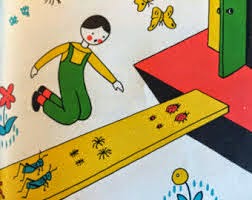 That's Mr. Noah, directing the insects and bugs onto the ark.

Anyway, Hank didn't remember the book which was sort of funny because I remembered it so well. But he likes it and I'm glad I got it for him.
And my librarian friend? We're friends on Facebook now and I'm friends with her daughter whom I used to take care of during the days back when I lived in that little house in the woods that I wrote about a few weeks ago.  She and Hank and May used to run around naked like the little beautiful heathens they were and they were all the best of friends. The daughter recently had a baby and she lives in France and it is so sweet to be able to see pictures of that child, her mama, her grandmama.

I went to the library and ran into my darling Kati and checked out new books and then I took myself to lunch and got a falafel pita because I'd been craving one but it wasn't as good as I remembered. The counter girl was darling though. She told me she was really tired. That she'd been there since 9:30 and would be there until 10:00 tonight.
"I'm sorry," I said and I was, meanwhile wondering why people tell me these things.
"It's okay," she said. "I have to eat!"
And when she asked for my name I told her "Mary" and when she brought me my sandwich she said, "Here you go, Miss Mary!" and I was charmed.

I was going to get chicken scratch but who knew the feed store closed on Saturday afternoon? What's up with that? So on to Publix where Lily was working and I bought stuff for the men to eat while watching The Game tonight. Wings and stuff to make nachos and all those vegetables that you dip into blue cheese dressing to negate any possible vegetable nutrients which might be lurking in the celery, the carrots, the cucumbers, the snow peas. And beer. I bought beer. Lily bagged my groceries and walked me to the car and we got to chat a moment and we hugged and hugged.

But now here's something funny. The ad that was in my shopping cart: 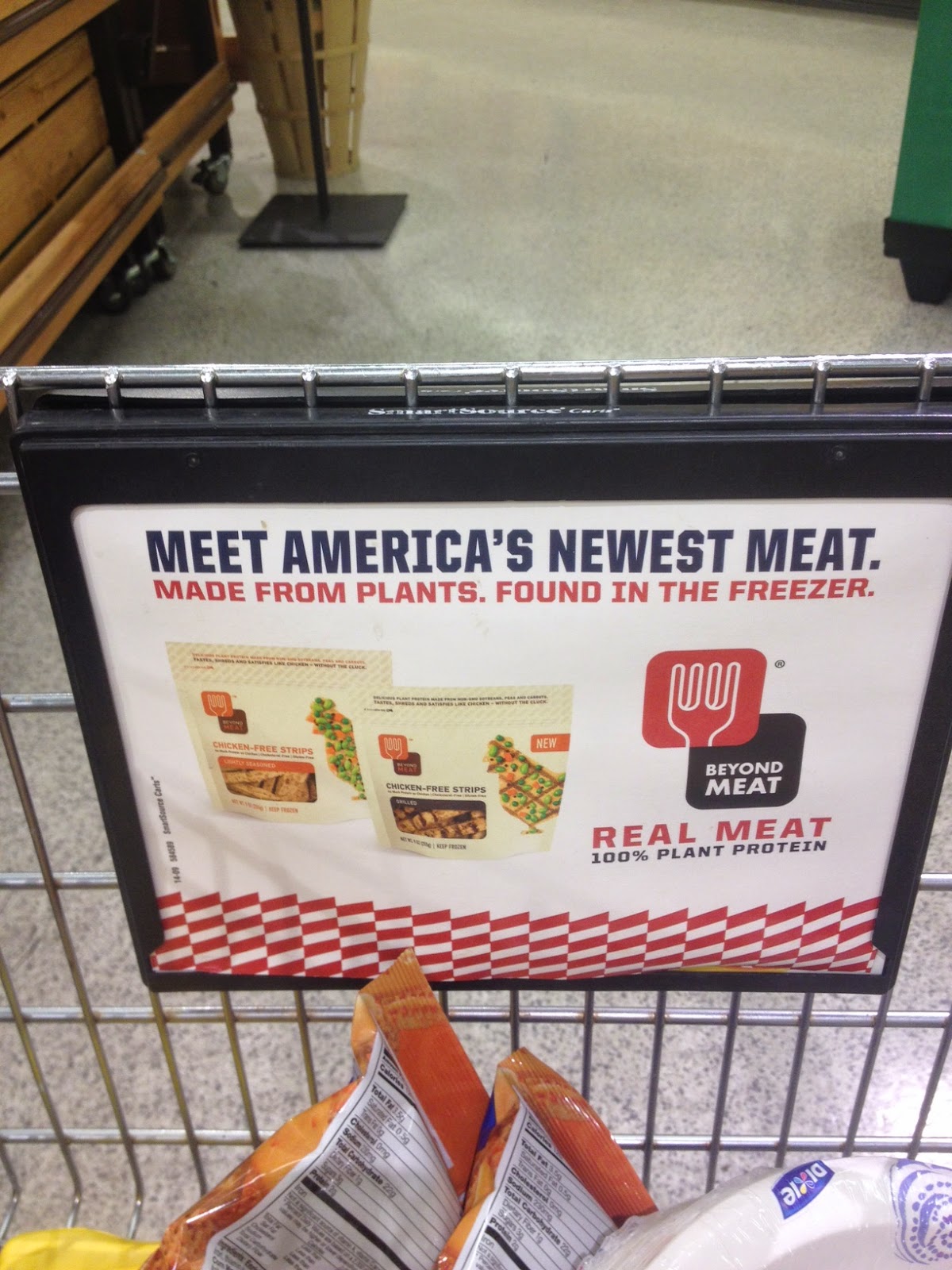 It was mystifying. REAL MEAT it says. And yet, 100% plant protein.
Say what? This is confusing. I just checked out their website.
I'm still somewhat confused. I mean, I know it's 100% plant protein (and gluten-free AND Kosher AND vegan) so how can it be real meat? Like...nut meat is nut meat? Plant meat is plant meat? And it has MORINGA in it. What the hell is moringa? And bottle brush herb. And sea buckthorn.
Good Lord. I shall most definitely have to try this. For all I know, I am dangerously low on moringa, bottle brush herb and sea buckthorn.
I am pretty sure this is not something that my grandparents would have recognized as food which Michael Pollan tells us is a product to avoid. But curiosity truly does impel one to check this shit out.
Maybe.

Anyway, here's a picture of a happy man in his new chair. 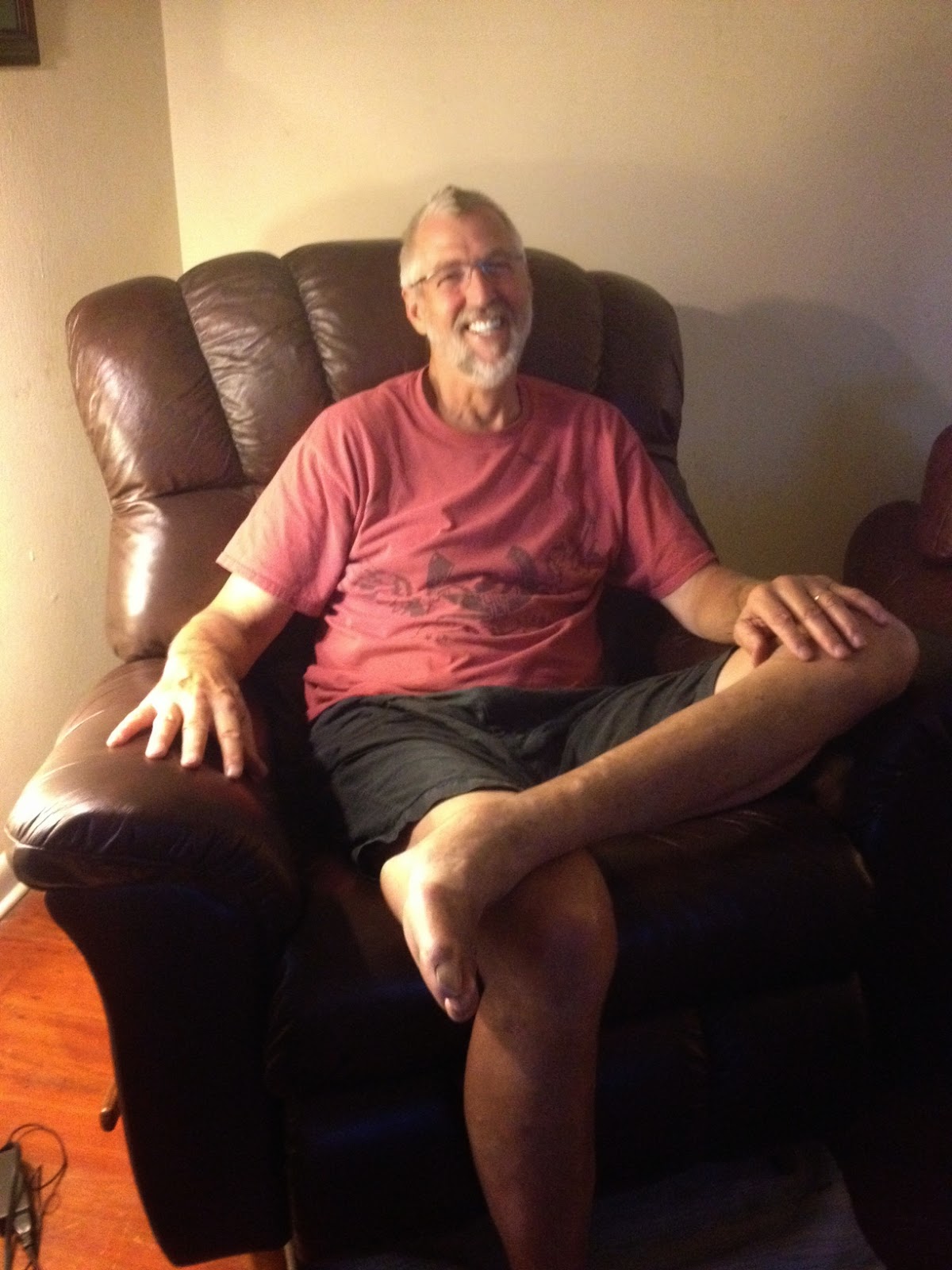 You want to know something funny? When I went to take his picture, he was putting a scope on his hunting rifle. This was a little too close to my prophecy of us having shotguns leaned up against the front door and I made him put the gun down ON THE COUCH! Now he's gone to go pick up his four-wheeler at the auto repair shop down the block. Yes. Lloyd has an auto repair shop and it's a damn good one. And last night? He told me that he is going to start drag racing again. He used to do it in high school without his parents' permission or even knowledge until he got busted when his mother went to get something out of his trunk and found a bunch of trophies he'd won.
My husband.
God. I love him. 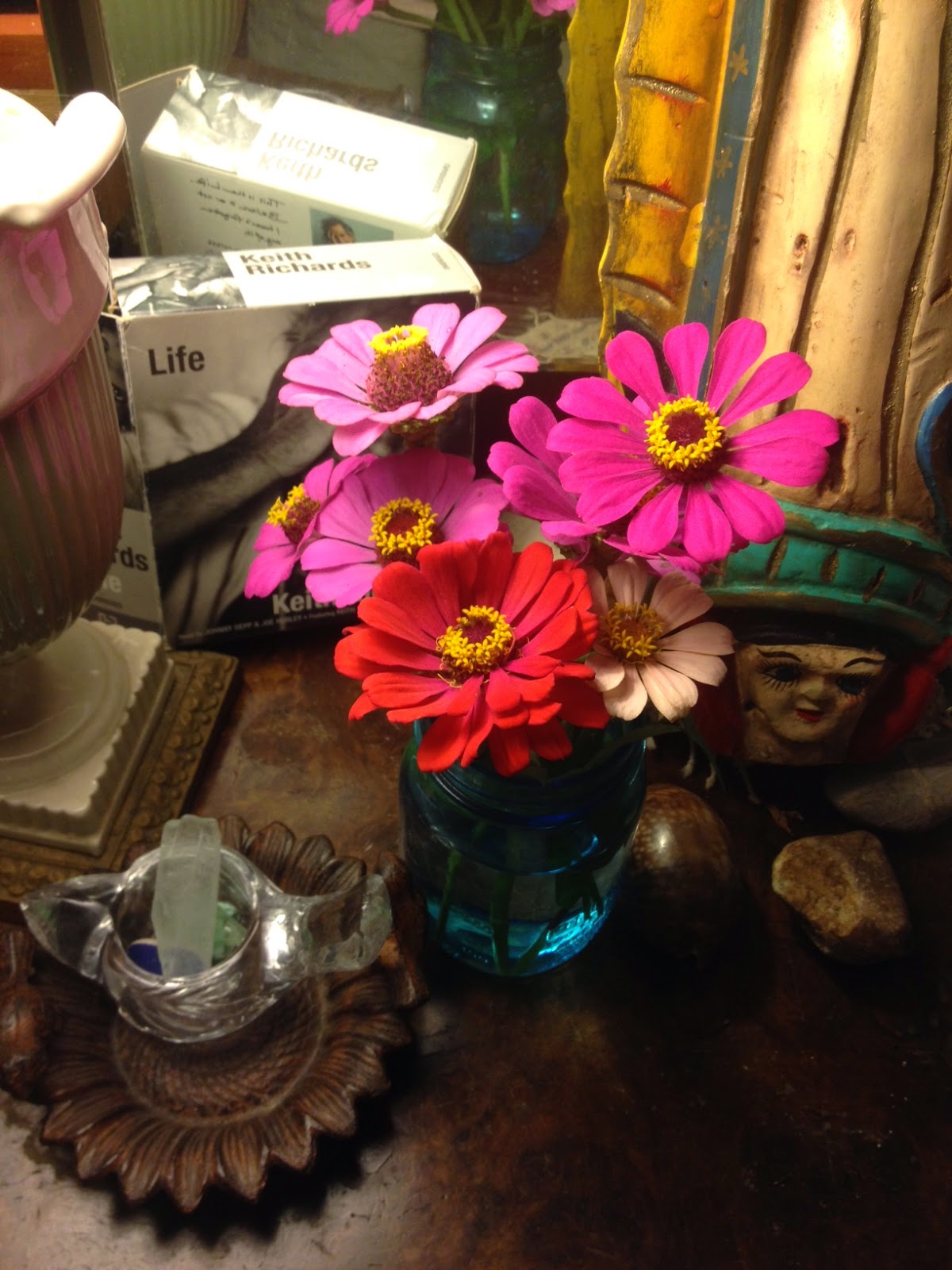 where it sits with some of my most beloved sacred icons.

I send them to you, those simple, sweet, brightly colored blossoms. Soon they will be replaced by the pine cone lilies and I'll send those your way when that happens.