And My World Is Even Richer

Ay-yi-yi! Twenty hours with my boys by myself and we all lived! I am so proud of myself. And of them. They were good boys. Well, okay, Gibson didn't go to sleep until around midnight and then he woke up at three and wanted to snuggle which would be lovely and fine if every time I drifted off again, holding him all sweet and cuddly and warm and good in my arms, he didn't take it upon himself to stretch his legs, thus stabbing me in the thigh with his toenails, or decide he wanted to stroke my arms or my face or to suddenly ask, "Where Maurice?" Finally I got smart enough to move him over on the bed and retreat to my side, Maurice on the other side of me, and by four we were all fast asleep again.

Owen woke up first and I got up with him and then eventually Gibson got up and his first words were, "Where Owen?" and then Owen came in to greet him and they hugged and can I just say that my grandsons are the sweetest brothers? Because they really are.

I made pancakes and bacon and I'm not sure why I made the pancakes because all they really wanted was the bacon but the chickens were quite appreciative of the banana/peach/ buttermilk pancakes, especially already cut up with butter and syrup. It was 97 degrees here today on the kitchen porch, which is in the shade and also a bit buggy so our time outside was limited and yes, they watched too many cartoons and Owen played too many games on the iPad but we did read some books and we did draw and write with feather quills dipped in food-coloring (nothing can go wrong with that plan, right?) and it was fine. 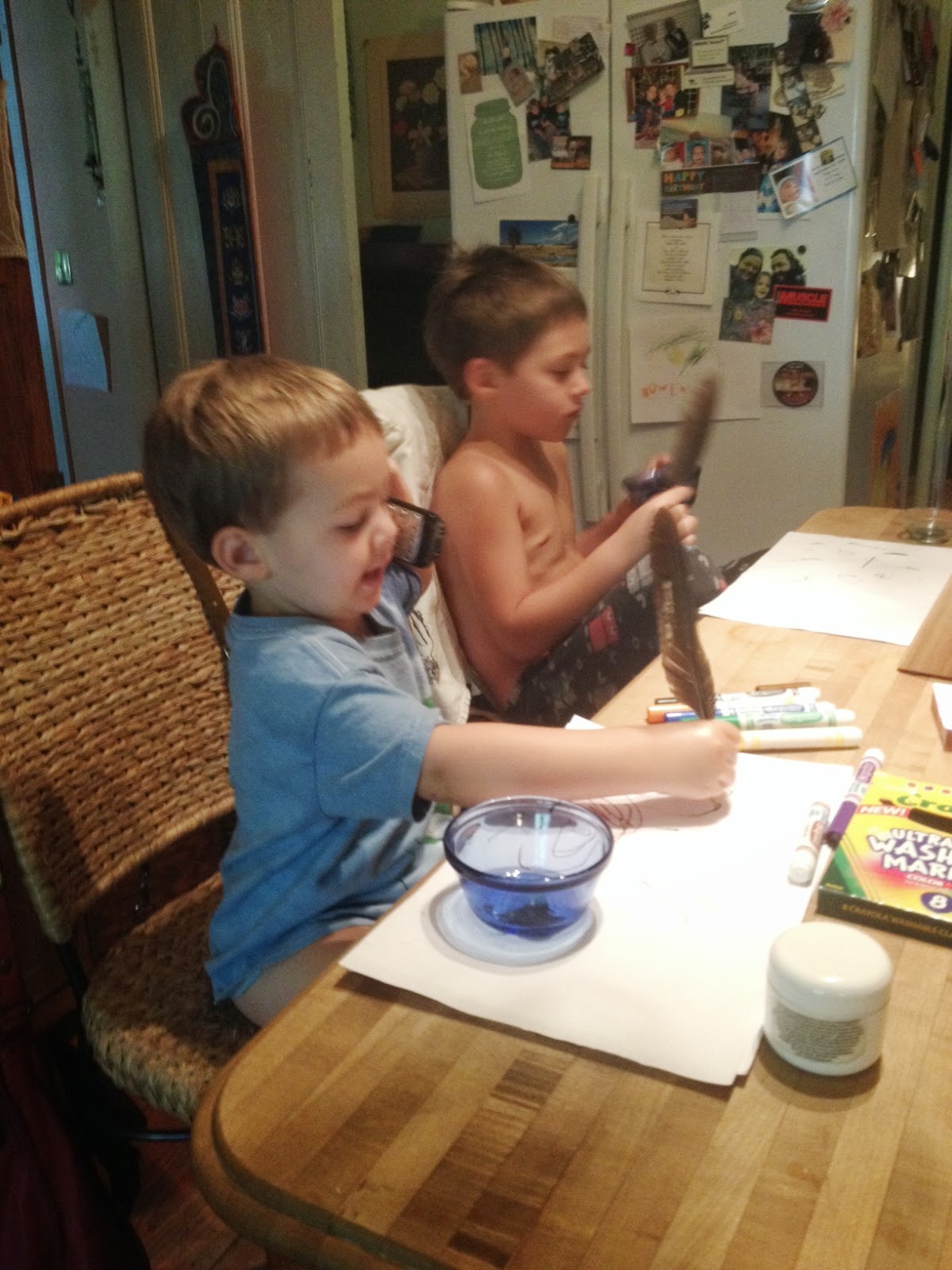 When the boys got here yesterday, Gibson immediately asked where Dolly and Buster were. Owen wasn't in the room. I got down on his level and said in my saddest voice, "Oh honey. They are gone."
End of discussion. He went on to the next thing.
Owen never even thought about the dogs until this afternoon when we were going out to feed the goats some carrots and gather the eggs. I left the gate open that we have always kept closed to prevent the dogs from escaping and Owen went to close it. "You don't have to do that," I said. And then thought to myself, whoops!
"Why not?" he asked me, his smart-beyond-his-years eyes looking straight into mine.
I paused.
"Dolly and Buster are gone," I said. Hey! It worked with Gibson.
"Where?" he asked. Of course.
"Well, honey, they're dead. You know how old they were."
"Yeah," he said. "But where are they now?"
And I showed him the grave and he tried to determine which side Dolly was on and which side Buster was on and after that, as we were walking over to the goat pen I asked him if he was sad.
"Not really," he said. "They were boring. And stinky."
So that was pretty much that although we did talk about the fact that his great-grandfather had died recently and also Mr. Peep and Muley and Drogo. Then he and Gibson fed carrots to the goats and Owen climbed a tree up so high it sort of made my heart stop. He thinks he's Tarzan these days. 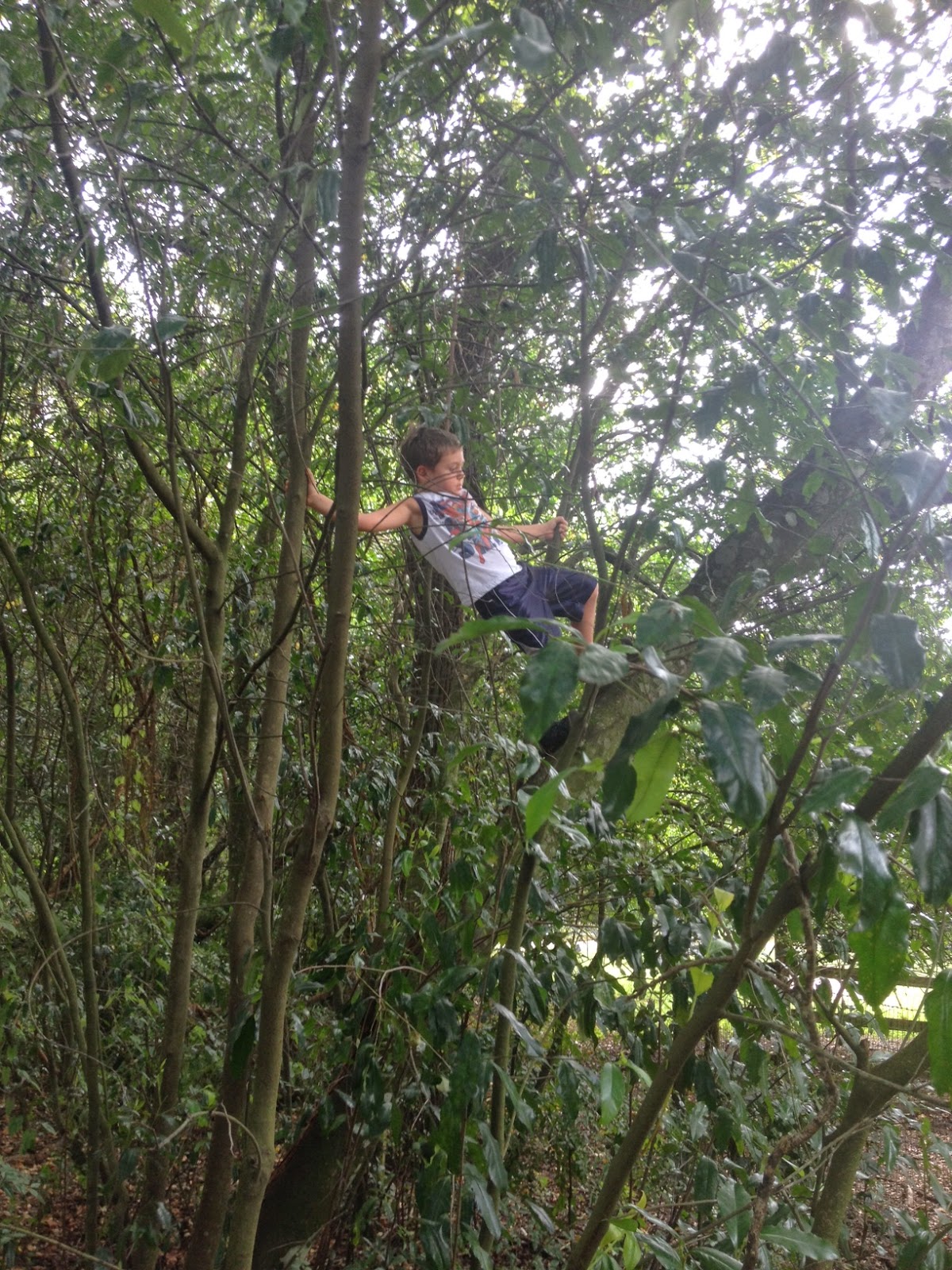 "I can't get down," he said.
"Oh really?" I asked.
And then he figured it out. He reached over and grabbed the skinny trunk of a tree next to him and slid down it. 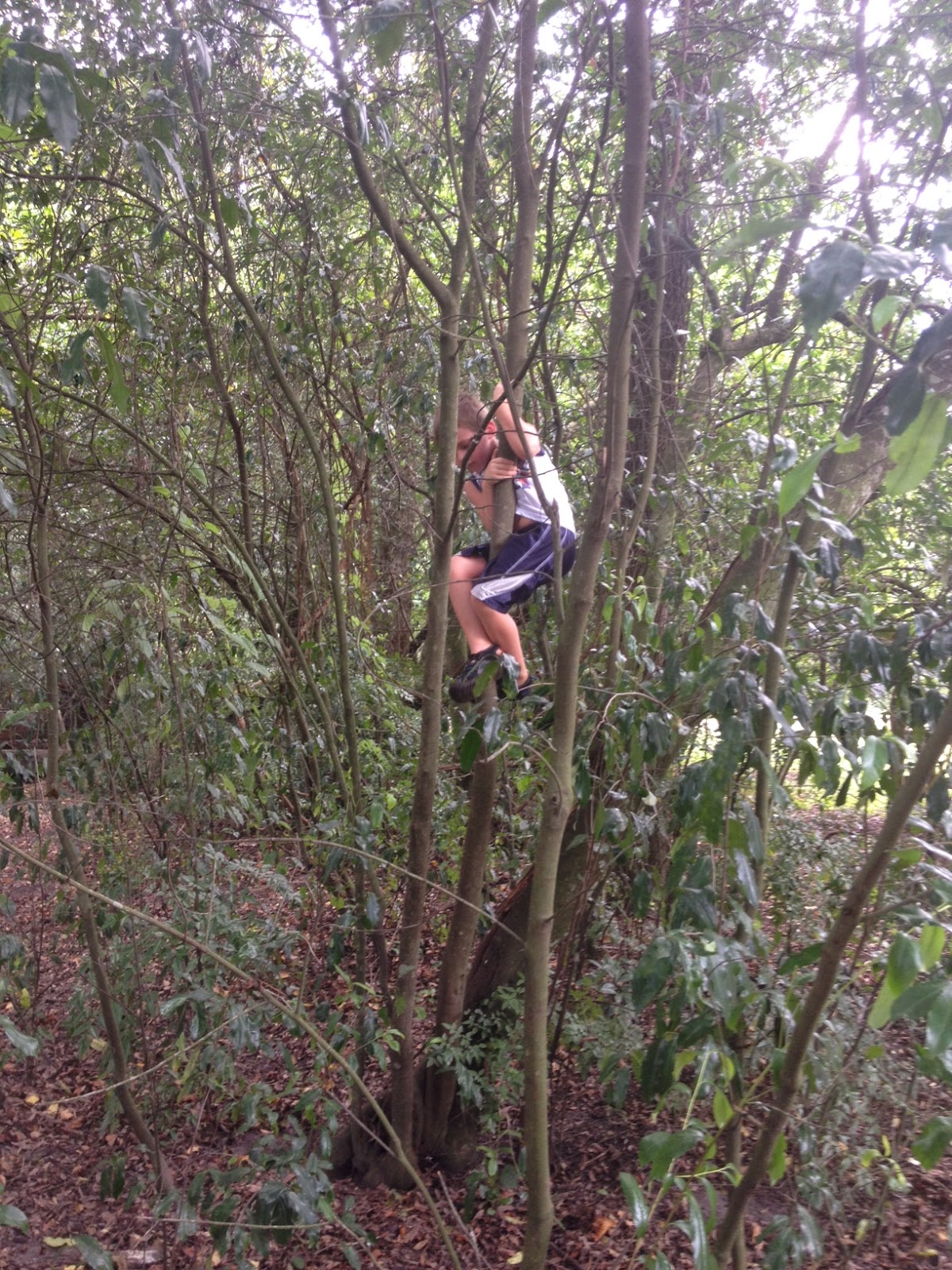 This delighted him so much that he did it three more times and then we found seven nice eggs.

So it was a good time and their mama came and got them and Owen gave me a quick massage and a phlox bloom and he told me he loved me and Gibson kissed me and they went home. 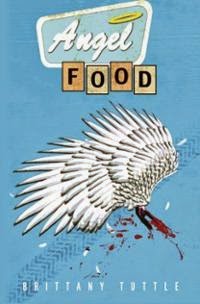 I'm not even sure how Brittany became part of our blog-community but I am so glad she did. I knew, from reading her blog, Vesuvius At Home, that she was an amazing writer. But you know, sometimes amazing blog-writing doesn't translate to novel writing. I mean... it can but it doesn't always. I'd read her Shebooks novel, Stone and Spring, and I was intrigued. I didn't feel that the Shebooks limited page format gave the book a fair shake, so I was really interested in reading Angel Food to see where she could go with more pages, more time to develop a story.

I ordered it from Amazon the day it came out and it took like two weeks for it to arrive. Every day I went to the post office thinking, today's the day, until finally, it was. I was in the middle of reading a library book but it was just short stories so I set that aside and started it.
And fell in love.
I haven't read a book with such an original storyline in forever. And her characters! Oh my god. I fell in love with every one of them! In my review that I wrote for  Amazon, I compared Brittany's voice to Tom Robbins', Matt Haig's, and Neil Gaiman's. Also, as other reviewers had said, Quentin Tarantino's.
But you know what? Nah. It's all Brittany. HER voice; her own incredibly unique and talented voice.

I'd say I was gobsmacked but honestly, I knew she was that good of a writer.

Last night, after Gibson finally fell asleep and I got him transferred to his bed and I'd taken my shower and curled up all cozy in the bed with Maurice, I picked up the book and finished it, straight through to the end, even though I was tired and knew that I was probably going to be woken up by a two-year old as soon as I fell asleep, I just couldn't stop myself from reading the last few chapters. And when I had, I set it down on the bed beside me and I thought, "Oh shit. There has GOT to be a sequel."

When was the last time you thought that when you finished a book?

So. Okay. Enough. If you haven't already, order the book.
Here's the Amazon link.
Unwrap  it, hold it in your hands- a real book. With a great cover.
Go pee, get an apple if you want an apple, a cup of tea or coffee, get comfy, settle down. Open it up.
Start reading. Enter another world created by the mind of another human being.
Isn't that why we read?

Mr. Moon's home. There's a chicken in the oven and brown rice and spinach on the stove. It's been a real good weekend.