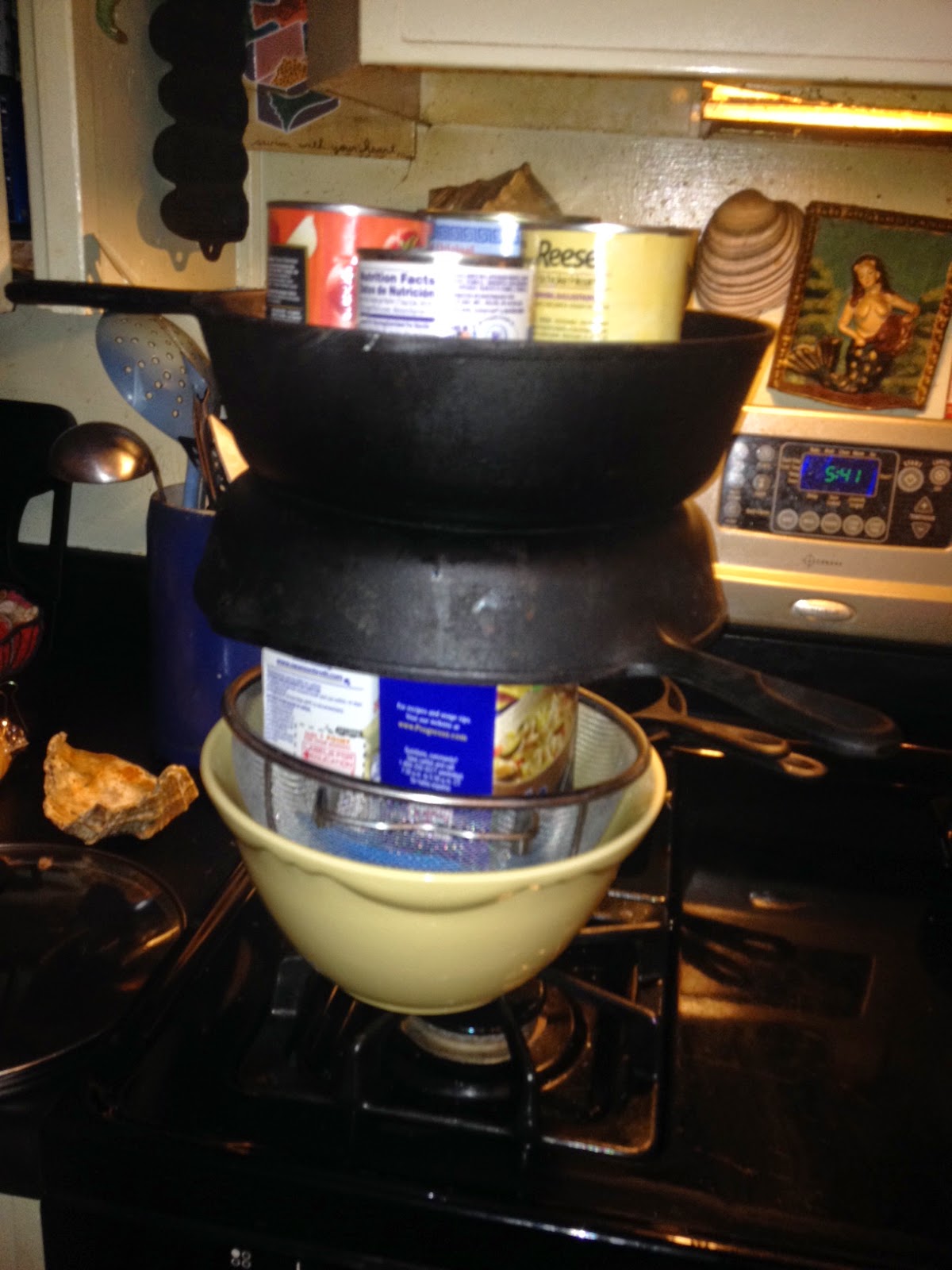 Do any of you have any idea what's going on here? Lis, I know you do.
I am pressing tofu! Of course! Is that ridiculous or what? And after I press it, I will freeze it. And after I freeze it, I will thaw it and slice it and marinate it in Tamari. And after that, I will bake it on cookie sheets. And then I will eat the slices for snacks and they will basically be little pieces of salty protein and hey- it's better than Velveeta. Better for me. Theoretically, at least.
I like the texture after pressing and freezing better than the texture without. I like deep-fried tofu the best but hey- let's not go there. Deep frying makes almost anything taste good and I feel certain that there are many people who would eat deep-fried wood chips with gusto, especially if they were battered before frying and then smothered in gravy or cheese.

Anyway, la-di-dah, I just thought that was a funny sight to see and please feel free to laugh at me and also to tell me that they make tofu presses. I'm sure they must.

So it's been another truly fine day. I went to town and here's a confession- I went to Walmart. I needed a bag of potting soil and I didn't want to drive an extra eight miles to get it. So I got a bag of potting soil that weighed approximately nine hundred pounds and oh shit, a few succulents to put in pots and a Wigglin' Water Sprinkler (!) for the boys to play in.
I feel guilty but fuck it.

Then I went to Publix and bought healthy foods, mostly fruit and beans and vegetables and also Suavitel fabric softener because it's cheap and it smells great. The smell reminds me of Mexico for some reason, not unlike Fabuloso. I have a friend who, years ago when I had four children at home, used to love to come to my house because even as far away as the driveway, you could smell the Downy. Needless to say, with four kids and two adults and generally one or two strays staying with us, I did laundry night and day.
Hey! I still do laundry night and day. What's up with that?

I came home and unloaded everything and started some laundry (of course) and managed to get the bag of potting soil out of the trunk and into a wheelbarrow and fooled around with potted plants and redid the little planter I've made out of an old, rusted Red Flyer wagon that Mr. Moon brought me home from the dump. It's one step up from making a planter out of old tires and at least fifty steps up from making a planter out of an old toilet which even I think is tacky although I would love a bathtub virgin altar. 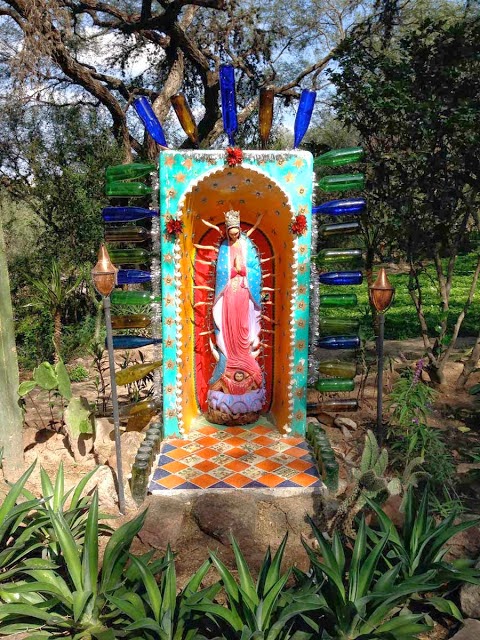 (Click on the picture to go to the link where I stole this from. Thank you.)

Mine would have a lot more flowers and twinkle lights but you get the idea.
I should just do that. No one in Lloyd would care. Okay. New project. Gotta find an old bathtub. And a Virgin.

While I've been doing all of this completely useless folderol, Mr. Moon has been outside all day in the horrible, terrible heat and humidity working on siding. I do not know how he does it. I was outside for approximately an hour, just barely working at all and I was drenched with sweat.

I've also spoken to my darling brother Chuck as it is his birthday. I remember the day he was born like it was yesterday. As I have said so many times before, my baby brothers (my brother Russell was born a year after Chuck) saved my life. I was in my early teens when they were born and they gave me something so sweet and pure to love when everything else in my house was the exact opposite of sweet and pure. When I got older, I tried to figure out ways to get them out of that house and into my care. I never did but I sure wish I had. They were MY babies and I loved on them, changed their diapers, fed them, and just generally learned how to be a mama from them. Here they were when they were probably about four and three. 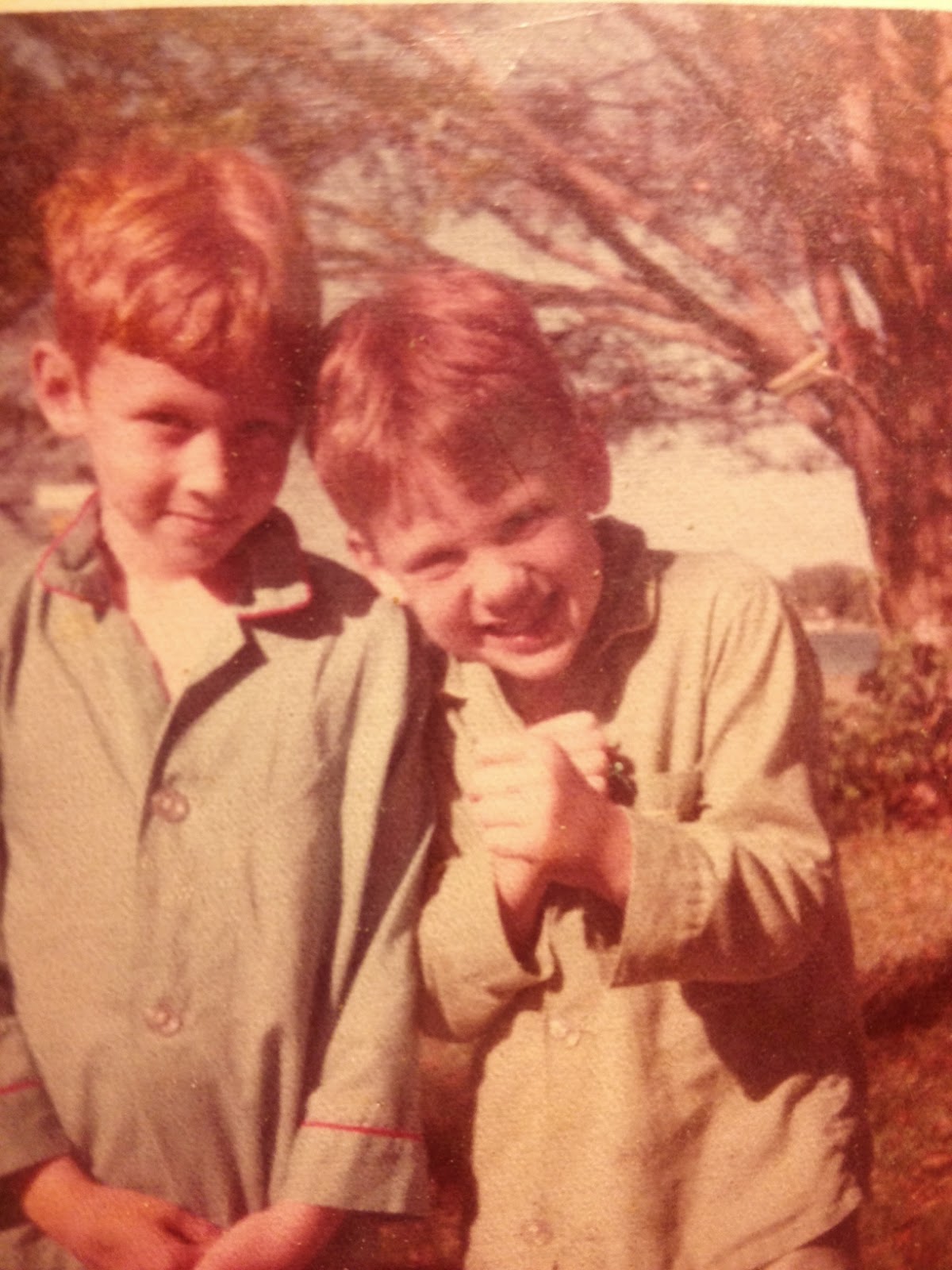 Redheaded as the dickens, my darling little rapscallion baby brothers.
We've been through a lot together.
And it was so good to talk to Chuck. He'd just gotten home from his thirtieth high-school reunion in Winter Haven and he had a great time and I'm so glad. He's the father of two beautiful children, husband to one beautiful wife. I am so proud of him.

My husband is home and showered and he says he's fine although he can barely walk. I'm going to make us a nice salad for our supper and give him some of the incredible chocolate cake that Jessie baked for my birthday. It's the kind of cake that only gets better with age. Dense and made with stout and coffee, thickly iced with what amounts to the best fudge you ever ate. He deserves a big old hunk of it and Lord knows, he's expended enough calories today to eat it without guilt.

It is raining a little bit and we've been dry so I'm thrilled about that. The smell and sound of it makes me feel as if all is right with the world.

I guess I better go deconstruct my tofu press and get started with that salad.

I am a happy woman and the fact that it's Sunday hasn't bothered me a bit today.

May wonders never cease. For you either.