We Are Born, We Die, But Between The Two, There's The Life 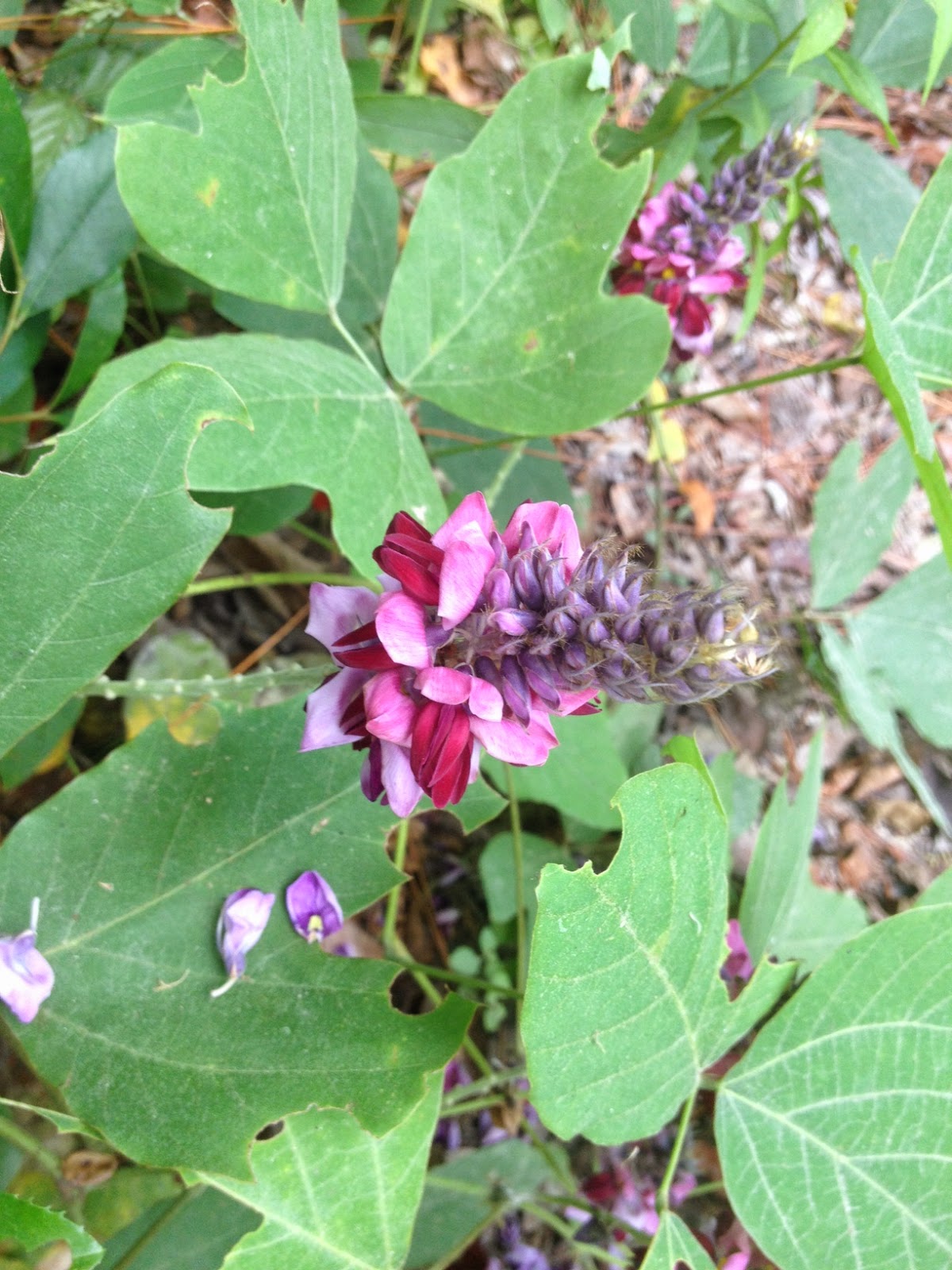 Thunder rumbles off to the west and yet, we remain dry. The resurrection fern has curled back in on itself and is dark brown, looking like a dead thing coating the branches of the live oaks. I do know though, without doubt, that they will be springing forth green again when we do get rain.

I took the picture of that flower above on my walk and I do not know what it is. The leaf of the vine it is growing on looks like a variety of passion flower vine but after looking that up, I see nothing which resembles it. I will say this though- if you want your eyes to be flooded with color and crazy and beautiful, google-image passion flower.

Perhaps Kathleen would know but she is in the hospital in Thomasville. For those of you who have not been here for a long time, Kathleen is a friend of mine who has been living with cancer for over four years now. She was initially told by an asshole doctor in Tallahassee that she would be dead in six months but she found a wonderful doctor in Thomasville, Georgia, who did DNA testing on her and figured out a treatment which has not only extended her life incredibly but which was not so very difficult to tolerate. In those years, given blessedly to her, she has traveled to Spain twice, fallen in love, married, and she and her new husband have traveled the country on a motorcycle and bought a new place, restored and remodeled a house, moved, and continued to raise her chickens, ducks, cats, dogs, and plants. I doubt I've met anyone else in my life who lives as fully as Kathleen does.
She blogs here.
Right now though, she is in a great deal of pain and the cancer is finding new places to dance in her body to torment her. She is quite sensitive to pain drugs and can't tolerate most of them and now they have her on laudanum, a very old but effective drug, made of opium.
I am having a hard time talking about this. But I spoke with her this morning and although she says she really can't continue on like this for much longer, she is still hopeful that this is just a phase and she will come through it to enjoy her new crop of chicks and her new home with her husband for some time to come.
May this be so.
We talked about various things and we even laughed. I will go see her tomorrow if I can, whether she is still in Thomasville or at home, right down the road a bit.

Jessie and Vergil will be here in a few hours and I don't know what I should be doing with my time. I took the trash, took the walk, made the bed, dusted one table. I feel a bit paralyzed. There is so much I should be doing and yet, don't feel the motivation to do any of it.

It's okay though. Just as the resurrection fern waits for the rain, I wait for my next time of renewal. Meanwhile, I have a new flower to wonder at, sweeties coming to town, the scent of rain in the distance and also, this. 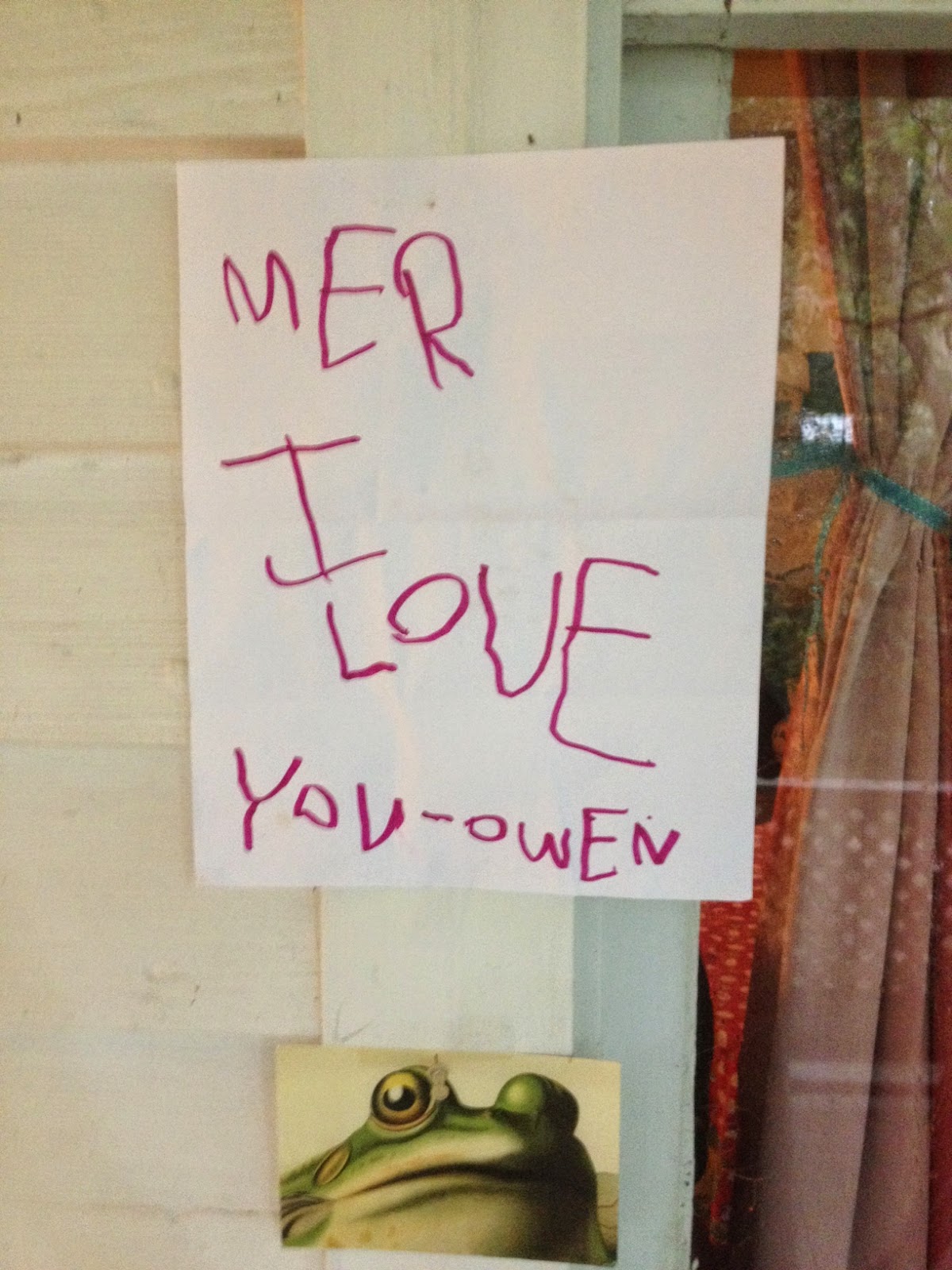 A letter that Owen brought me the other day. He can't really read or write but he can copy quite well, don't you think? Such a dear boy. Such a funny boy. Yesterday my neighbor called to tell me that Hilary had died and she wanted the boys to know. Hilary was the mule whom we called "Muley" that we fed with slices of apple. I told Lily and she told Owen. His response was of sadness but mostly because she was already buried and he didn't get to see her "deaded." Did I tell the story of last week when the library was stunk-up and I told Owen not to go in there because something had died?
"Maybe it's Dolly," he said, with very little concern.
Aw well. He no more understands death than we do.
He's got a pretty good handle on life though. He is one of my major teachers in this regard, as all of my own children have been.