Another House, Not My Own

I asked Mr. Moon this morning what he wanted for breakfast.
"I do like pancakes," he said.
Pancakes it was. With peaches and bananas and pecans and oat bran. And maple syrup. The other day in Costco I heard a man ask his wife if they needed maple syrup. She said, "No. Remember last time we didn't use it fast enough and it got all moldy?"
"Oh yeah," he said and they passed it by.
I wanted to say, "Uh, you ever hear of refrigeration?"
I kept my mouth shut.
While we were eating our pancakes on the back porch, Mr. Moon said, "Why don't you pick out a dishwasher?"
I almost fainted.
"Seriously?"
"Yeah. There's no reason not to. Maybe I could redo the counter tops."
This was huge. Huge I tell you. And I was just thinking about the counter tops I used to have in the kitchen of the last house we lived in and maybe I should talk about that house because yesterday I talked about the Jim Walters house where I sweated and cried and tripped and cooked and lived, and sometimes had magical times and there was, to be fair, lots of music which happened there and I have some good memories of it. I do.
But the contrast between that house and my life there and the last house I lived in before this one is unbelievable. I might as well have gone from a tent to the Palace of Versailles. And at least the Jim Walters house had plumbing which another house I lived in at one time did not.
When we bought the house before this one, we had been living for twelve years in a house in Tallahassee. I just about raised my kids there. It was perfect in many ways and just a few blocks from the house Jessie and Vergil are about to buy. Jessie was born in that house. And I can't even really remember why we moved out of it. I tend to get itchy about houses and I'd never lived twelve years in one place in my life. It was a fine house but we were looking for something else. With more property, maybe. I don't know. I just know that Mr. Moon reconnected with a very distant cousin, an older man, and he and his wife had built their dream house in the sixties and had lived there ever since and they were thinking about selling it because they needed to move closer to their daughter in Georgia due to health reasons.
"It's a cool house," Mr. Moon said. "I think we could get a good deal on it."
He told me where it was and I drove out that way to check it out. It was on the far eastern part of town and I was stunned when I saw it. The driveway ran for about an eighth of a mile, I swear, and you could have pastured a dozen cows on that lawn with room for two horses. The house itself was brick and redwood and it rose up, two stories, from that estate of a yard with absolutely no trees right around the house. Turns out that Cousin Charles was an insurance guy and he wasn't taking any chances with having a tree fall on the house. It was a Colonial-style house which I had no real interest in. Fine for wherever it was that Colonial style houses were invented but sticking out like a damn sore thumb in rural North Florida.
Still, when I saw that house for the first time, I fucking knew we were going to live there. I just had a feeling, the way you do sometimes.

And it was good and it was fun but it never felt like mine. I always wondered when the adults were going to come home and tell me to get out.
Our bedroom never got dark, no matter what sort of curtains and shades we put up. I moved the bed from wall to wall and I doubt I ever got one damn good night's sleep there. Ever. And forget napping. The afternoon sun beat through the very brick walls themselves and there was somehow no soundproofing in the house. If someone made a piece of toast in the kitchen, I could hear it in my bedroom. The giant fireplace turned out to be completely non-functional due to its size. There was no way that chimney could draw the smoke properly. I planted a live oak, a Confederate rose, magnolia trees, lemon grass, ferns, a garden. I yardworked my ass off. I tried. Oh, how I tried.
But somehow, it just was not my house.
We never used the living room for anything except as a place where the computer went.
The Viking stove slowly fell apart and became a hugely expensive piece of junk. I finally wrote a letter to the president of the company about it because they said it was out of warranty. I described the way the burners didn't work, how the electric ignitors made the phone ring. How I had to close the oven door with an axe handle propped up against it to keep it shut.
That letter was the most well-paid piece of writing I ever did because they sent out three men to come and investigate this piece of crap and they made it all work again. For free.
But shit. I didn't need a Viking.
I didn't need a formal dining room or acres of grass. I didn't need thousands of magazines. I didn't need a closet big enough to house a family of four. I needed a room I could sleep in. I needed shade and trees and less Williamsburg and more Florida.

The housing market went crazy. We knew this was the time to sell it, make damn good on our investment. We decided to find a smaller house (Lily had already moved out), a house easier to keep, closer to town.
And then we found this house which was none of those things but I had to have it like I had to have babies. I fell in love and thought I'd die without it. It reminded me of this. 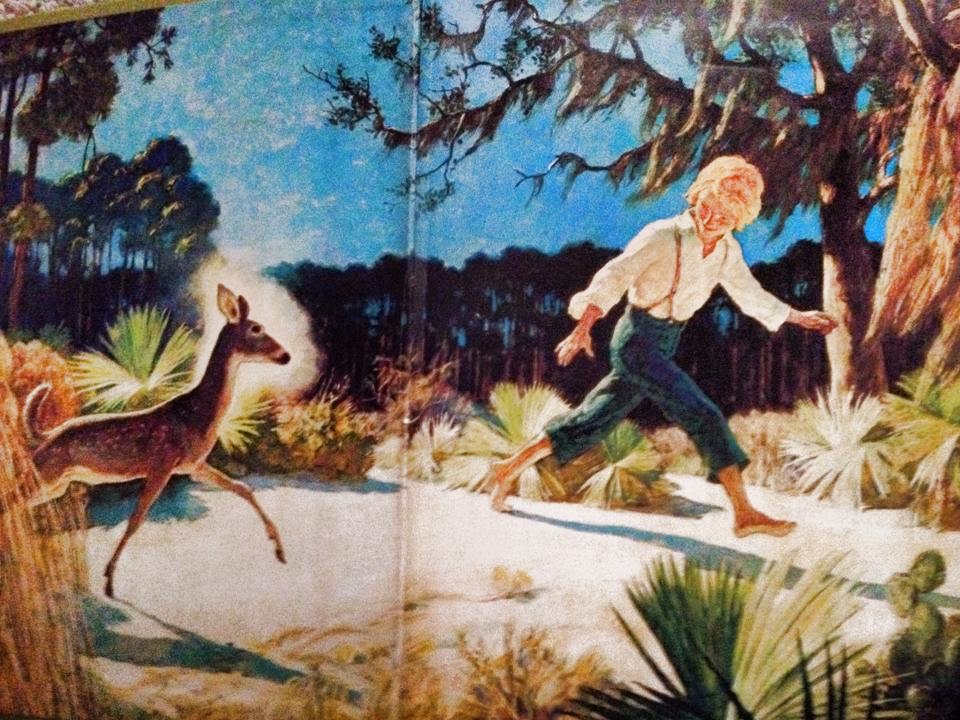 (N.C. Wyeth illustration from The Yearling)

It was me, it was mine, it was Florida and old and had history in every square inch of it. It had trees that were hundreds and hundreds of years old and shade and many porches and funk and it was real and I knew it was really mine.
And thus began another story and here we are.

We put that big old house on the market for a ridiculous amount and by god, we sold it for the asking price. We paid too much for this one but it's paid for. It's free and clear. Ours.
And the day we moved was one of the happiest days of my life.
I made pinto beans and cornbread on the decidedly not-a-Viking stove.
I turned fifty in this house. And now sixty.
I sleep good almost every night. My naps are things of wonder. My grandkids have learned to walk on the floors which are no more level than a drunk man's knees. They know all the hiding places, of which there are many. We've had music here in the library, the hallway, the back yard, the stairs. Dancing, loving, tending, joy, sorrow, regular days of not much but plenty.
When I leave and come home, the giant oaks of Lloyd welcome me back. Or at least they tolerate me and the peace they bring me cannot be described.

I tell you what though- I do miss that pool. I've broached the subject of us putting one in here but Mr. Moon says no. Too much work to keep up. He's right.

But then this morning, when he said what he said about getting a dishwasher, I was so shocked. When we bought this house, I swore up and down to him that I'd never ask him to do a thing here in the way of improvement and we have done very little. New central heat and air, some roof work. A little painting. His Garage Mahal. The chicken coop. Mostly what I've done is plant more stuff. Palms and camellias. A garden.
And I have long since resigned myself to washing dishes by hand. No big deal. I have a sink with running water and a hot water heater. I know how lucky I am to have those.
But. Hmmmm....
Might be nice. Dishes that come out of a dishwasher are so sparkly!
And new counter tops? Well, the ones in here are black formica and yeah, they're pretty ugly but they work just fine and hide the coffee grounds that get spilled.

Sometimes I drive past that other house and I am still stunned by the sight of it every time. But the only things I'm truly interested in about it are how much the oak tree, the Confederate Rose, the magnolias have grown. I did that, I think. And am grateful that I was able. Grateful for that bowl of sky it all offered me for five years. Grateful for the good investment it was. Grateful that the family who bought it so obviously love it.

Grateful that we have moved on.

And a little stunned at the idea of a dishwasher. But I think I could get used to that. Maybe. This is already my dream kitchen. Because it's in my dream house.
We'll see.

And I wonder if those magazines are still in the basement of that other house. We left them where they were when we moved because...dear god. It was more than we could deal with. I bet you they are. Not my problem. Another thing to be grateful for.
As if I didn't have enough.