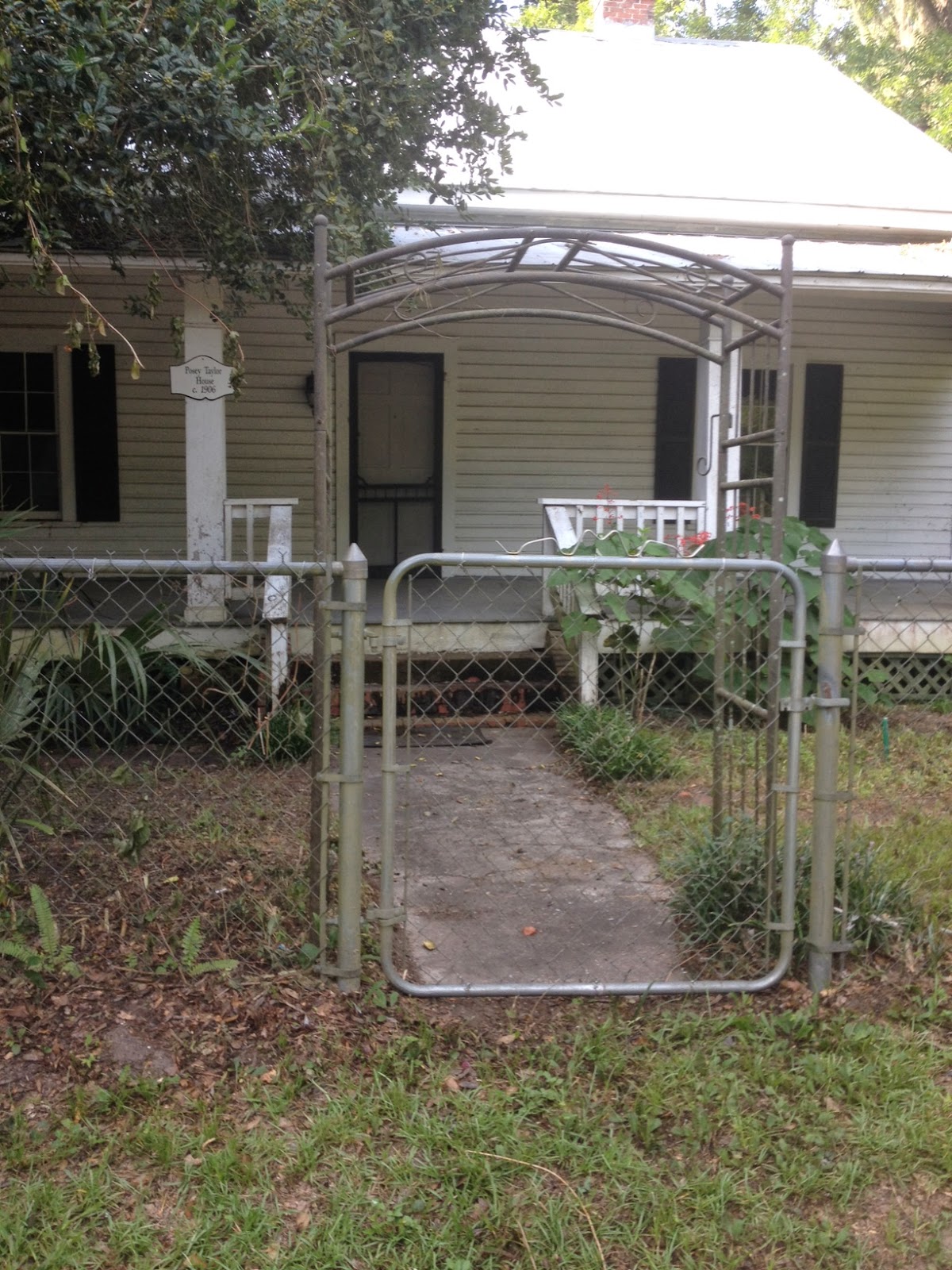 This is the trellis over the front gate of the house next door where the guy planted his mama a honeysuckle vine for Mother's Day years and years ago. The honeysuckle seems to have been a casualty of the total yard clean-up that happened there a few days ago. It makes me so sad. Maybe, just maybe, there's still some roots down there which will come back. I will watch carefully and if some come up, I may dig them up and bring them over here. There is something about the life of plants which I find sacred in certain instances.

When I went out to get my paper this morning there was a woman standing across the street and something about her vibe freaked me out. It wasn't her appearance. She was wearing regular clothes and had nicely groomed and pretty hair but she just seemed odd. I said, "Good morning," but she didn't answer and I took my paper and went back to the house. I watched her from the front window as she walked to the yard in front of the house directly across from mine and stood there for a long, long time. She took pictures of my house. Now, sometimes this happens. This is a photogenic and interesting old house. But still, this seemed different. By the time I went out to take my walk, she was gone.
The mysteries of Lloyd.

The boys are coming this afternoon and I wish I had something fun for them to do. I need to get an end-roll of newspaper paper. Can you still do that? My kids used to love to make giant, long pictures on those things. Roll it out the length of the hallway, give them markers and let them go to town. I remember they would trace each other's bodies, color and fill them in. At one time, my room was papered in those cheerful portraits of my own children, their friends'.

Between that full moon and Buster wandering about our room trying to figure out where in hell he was last night, I did not sleep that well. The dog's toenails kept slicing my sleep in two. This is really going too far. He stumbles and bumbles all over the place and Dolly does too. Why is it so damn hard to just cowgirl-up and get the job done?
I don't know. I don't know.
Because they aren't in obvious pain? Am I waiting for a sign?
Buster will walk right into Maurice, laying on the floor and she'll swat at him and he stumbles off. He bumps into us all the time. Dolly really doesn't move very much. She sleeps. I'm not sure when she eats. She must eat. She pukes a lot. Mostly bile. Is that a sign?
Oh god.

Well, that's about it in Lloyd today. Some other piece of shit human being has dumped another batch of garbage in the woods including what looks to be a king-sized mattress and bags and bags of trash. This is less than half a mile from the official dump place. WTF, people? I try to be compassionate and not judge things I don't understand but I can't help it in some instances.
The person who dug up the honeysuckle had no idea of its history but the person who dumped that trash knew full well what he was doing. Yes, I said "he" because you know damn well it was.
Probably.
And I'm still not sure about that woman.