As My Grandson Begins A New Chapter... 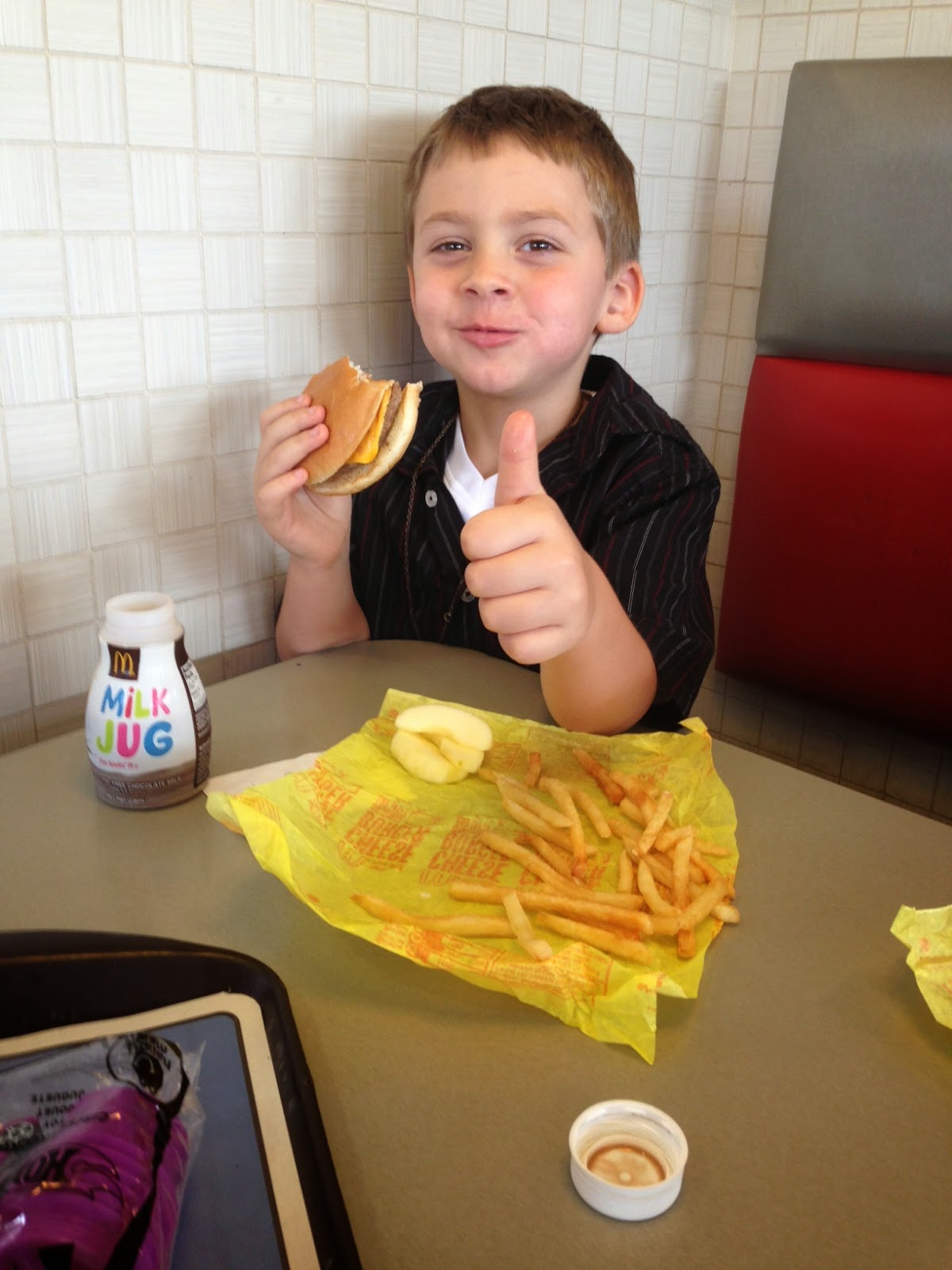 This is what Owen looked like after his first day of school, having lunch at McDonald's. That's where he wanted to go and so his mama took him.
As you can see, school was a good experience.
I asked him what he did and mostly, I think, he played. There was a Transformer toy and so it was all good.
I was mistaken about his schedule. He is going to go to school five days a week, not three. Every morning. And so it begins- the structure, the scheduling, the end of always-summer.

It sort of makes me sad. Sort of breaks my heart. But this is life and so it begins and I truly hope that he likes school and that they recognize who he is and what he needs. I desperately want his imagination to be able to flourish, his ability to spin tales and scenarios to be appreciated and not dampened in any way. And even as school concentrates on his mind and that kind of learning, I hope to goodness that he is allowed time to develop that body of his. I think he is a natural athlete, like his grandfather. He loves to climb bamboo, can already climb a rope, loves to swing from the rope and hang by his knees. Loves to climb trees, going from one branch to another. What an amazing thing to feel that one's body can do what one asks of it. To jump, to climb, to run, to dance. When I was a child, I was fat and always the last one picked for any team and the President's Physical Fitness Test was always the most dreaded time of the year. I could no more do the Flexed Arm Hang than I could jump into the branches of a pine tree from a standing position. The only thing I was halfway decent at was the sit-ups. It wasn't until I was an adult and started running than I realized that my body was as good as it needed to be. I would never run a marathon, but I COULD run, could lift weights. And even now, my short-ish walks are a powerful reminder to me that although I am constantly feeling as if I am probably dying from some dread disease, I am quite capable of doing a good walk on a hot morning. I can still sling Gibson up onto my hip when he says, "I need you. Carry me." I can still lift Owen up to check to see if there are any eggs in the outside nest. I may be in pain most of the time but it doesn't fucking stop me and I am so grateful that I learned all of this on my own because I sure as hell never got it in what we called "Phys Ed."

And I want Owen to be able to have that from the get-go. And Gibson, too, of course. To be able to know that their bodies are capable of doing amazing things. Now that Gibson's cast is off and he is truly healed, he goes non-stop.

"I running!" he yells and indeed he does. Oh, but I think that child is going to have some hedonistic tendencies. He loves his food, he loves to snuggle. When he woke up from a nap today he wanted me to hold him and so I did. We sat in the rocking chair and he clung to me like a baby koala, stroking my arms as I held him tightly to me, one hand on his butt, one on his back. We rocked and rocked until he was fully awake and ready to go play. He loves to lay on my bed, propped up on pillows and when I cover him up with the soft blanket, he smiles and says, "Nice."

Oh but I have wandered here. I guess the only true thread running through what I am writing is a sadness that I never loved my body until I was older and even then, even now, it is a love based on a great deal of ambivalence. Add in my earliest perceptions of my body, shaming by not only my classmates all throughout elementary school AND my physical education teacher, to being sexually abused and it's a wonder I have any positive attitude whatsoever about my body. And I want my grandchildren to never have to deal with any of that.
Of course.
I think that having my children naturally and at home with only the power of my own body has helped me to believe in my body as much as I have. I am just incredibly glad that I met women who influenced me in that direction at the proper time. To know that this body which I have despaired over so much throughout my life was able to create life and deliver it safely- well. That was a miracle. And then to realize that my breasts were able to provide for my children what they needed to live was another one. Instead of being what my stepfather focused on in my moments and hours of terror, they were the actual and literal fonts of life.

Well. Mr. Moon is out of town and I am going to go heat up the spinach goop that I made on Friday to go under a poached egg and poach a new egg (Ms. Ozzie's, to be exact) and feed myself. Tomorrow I have things to do that I don't want to face which are simple and should not be stressful at all but for me, well...they will be. And a few things on Wednesday which I very much want to do but which are not going to be easy. And perhaps on Thursday or Friday, we shall release Dolly and Buster to the universe to do with their energy what it will and then, as a last bit of service to them, bury them in the backyard.

I just need to go put the chickens up and fold some clothes.