You know you're tired when you go to make that shot of espresso which is hopefully going to keep you awake for the last hours of the day and you forget to put the damn cup underneath meaning that espresso runs all over the counter and just, of course, when you need it most there it is where you can't drink it but have to clean it instead.

"ASS!" I yelled. Which is odd. I don't know that I've ever used that word in quite that way. Was I addressing myself or just making a general statement on the situation?
Who knows? Even as I said it, I wasn't sure.

When I woke up this morning I was feeling not very happy. No reason. This happens. Mr. Moon and Vergil and Jessie got an early start into town to work on the house and I stayed behind, being pissy and moany and then I went to town and to a nursery and how can anyone be pissy and moany at a nursery? I knew exactly what I wanted- a new pair of pruners and two pairs of work gloves- and I knew where to find them and I did. Fifteen seconds. Done. There were two cats in the garden center. I believe they may be the owners. One was black and white, one looked almost exactly like Maurice. I bent to give him a little ear-scratch and he gave me the same look that Maurice gives me.
"Do you really need to do that?" is what I would assume the look means.
They were having a dog wash and rescue at the nursery and I got to pat a big old white bulldog's head. He had one of those heads as big as a melon. Bigger than those "personal-sized" melons. If his head was a melon, it would serve four. I love petting bulldogs because you can just get in there and pat 'em hard. Their heads are made of titanium or something. No delicate pit-pats for a pit bull. Hell, no. He smiled at me, the way pit bulls do and it cheered me tremendously.

I checked out and the guy behind the cash register agreed with me that a new pair of pruners and new gloves was heaven on earth. This cheered me even more.

Then I drove to Jessie and Vergil's and started in on weeding and trimming. I don't think I've ever seen so much thorn vine in my life. I freed a camellia from it and felt as if I'd saved a life. That yard needs some intense work and love. You can't even tell what's in there, it's so overgrown with cherry laurel and other assorted crap plants and saplings. Anyway, after we ate our lunch of delicious Publix subs in the dining room and I drank about four quarts of water, my energy sort of drained but I went back out to work and was digging away in a bed that needs to just be torched when I looked up to see my dear friend Kati, whom I hardly ever get to see. It was such a treat! She highly approves of the house. Highly.
I finally folded just a little while after Kati left and this man 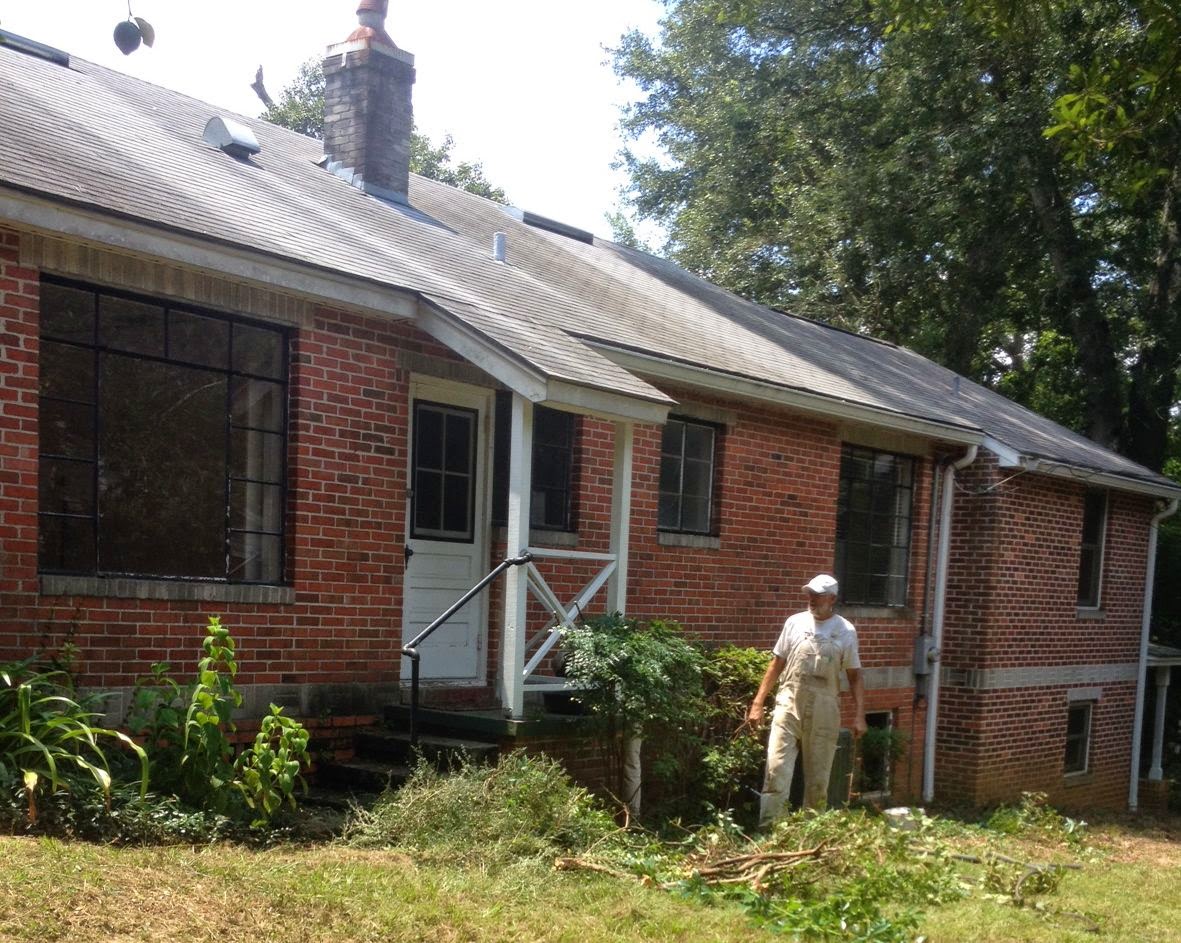 who is my old man, said he was exhausted and would be coming home soon too.
Of course, he's still not here and that was two hours ago. I just texted Jessie because he wasn't answering my texts, to ask if he was still there.
She texted back that yes, he was.
"Jaysus, Mary, and Joseph," I wrote back.

What am I going to do with this man?

Probably feed him some supper and love him to pieces.


One of the old hens laid today. They still get up in the nest and just sit there for a good long while. Then they hop off and there's nothing there. I think they're just taking little naps. But today, I found one of Ozzie's blue eggs though it is far less blue than her eggs used to be. Getting old is hell. The young hens get up on the nest and they just get the job done. Spring chickens. 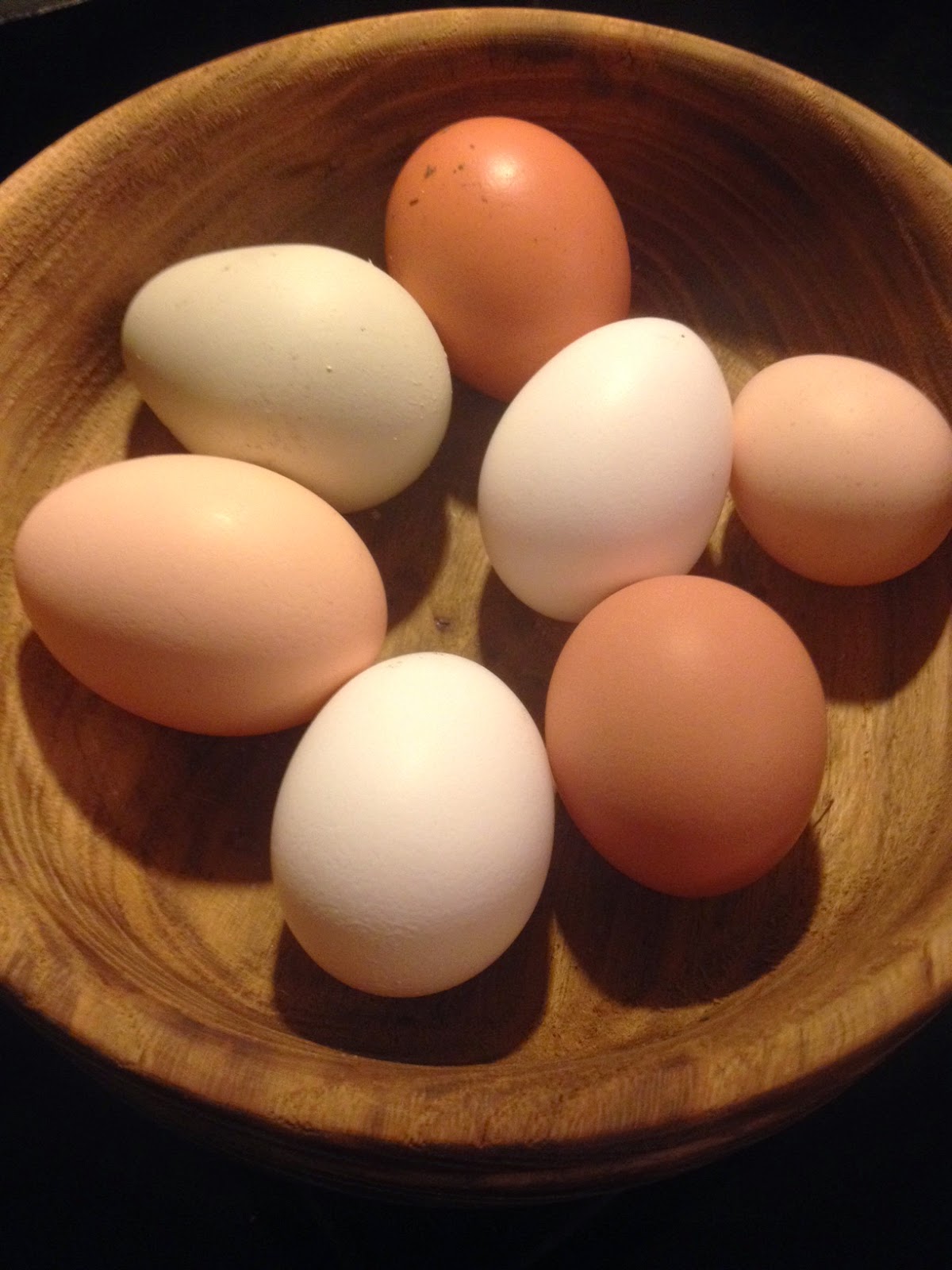 What a pretty little bowl of eggs. You'd think I'd be over the charm of them, wouldn't you? Well, I'm not. The daily miracle and I refuse to see it any other way.

Pretty eggs, a store-cat, a fine bulldog head to pat, new pruners, new gloves, deciding to make meat loaf and realizing I have ALL the ingredients I need including portobello mushrooms, a surprise little visit with a dear one, hanging out with Jessie and Vergil (and Melissa, who was there too) and my husband, all of us working together to make this move a reality, a son who calls to check on me if I don't post anything here every morning, enough espresso to make another cup.
These are all good things and I am glad I got my head out of my ASS enough to appreciate and even enjoy all of it even if it was 95 degrees out there and my forearms are now all lashed and gashed by thorn vines. This is Florida, where I choose to live and my daughter and her husband have chosen to live here now too.
As Matt Haig said on his blog today, "Let us enjoy the fruit before it browns."

Let us do that.

Amen and much love...Ms. Moon