Good god, y'all.
The kitchen is cleaned up for the last time today. I think.
And can I say that besides August, one of the very best things about 2015 was getting a dishwasher?
I give thanks for that machine every day. Frequently, several times a day.

So I got a couple of INCREDIBLY cute videos of Gibson telling me why it is that he's going to sleep in "you bed." It's because...monsters.
Right.
But for some reason, my iPhone and google just don't want to Kumbaya with the videos any more. Fuck them.
Trust me though, the kid is cute. And funny.

So we had a very lovely gathering and I took no pictures. Why? I have no idea. But Vergil's dad and his wife and Vergil and Jessie and August all came over and Lily and the boys. Jason was at work. We ate black-eyed peas and bread and greens and apple cake and cheese and crackers and summer sausage. Vergil's dad and his wife had never visited so they got the full house and yard tour. Owen demonstrated feeding goats and climbing trees. The chickens demonstrated being chickens. We had a good time. Vergil made Moscow Mules. Ginger Beer was involved and they were delicious. The Ginger Beer was also used in the traditional Purple Cows for Owen and Gibson.
They too, according to the boys, were delicious. 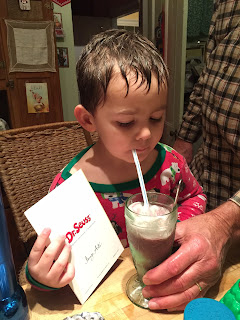 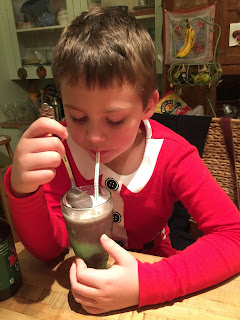 I love how I just set the drinks down and say, "Don't spill," while Boppy actually hangs on to the drink for Gibson. Guess which method actually prevents the inevitable dumping of sherbet, grape juice and ginger ale onto the floor?
Yep. Boppy's method.

So. Baths are done, Purple Cows consumed, teeth have been brushed and the Wii tournaments have commenced. I can hear the yelling and laughing from here on the back porch where I am typing this as Luna tries to burrow into my bosom.

Lily and Jason are at the movies, watching Sisters, or whatever that movie is, hoping that a lot of laughing and buttery popcorn will bring on the baby. I think that it is going to be a long night for me because Gibson is going to need me all night long. That is just the way it is.
Well. What can one do? Grandsons must be protected from monsters.
Ask me how I feel about that at 3:00 a.m. as Gibson tries to burrow himself into my bosom. Who knew that at the age of sixty-one my bosom would still be of such interest?

Sorry about the weird formatting here tonight. Google and I are having a bit of an altercation and Google is winning.

I better join the boys. I asked Owen a little earlier what his favorite part of spending the night here was.
"Purple cows?" I asked him.
"No. Family," he said.

Jeez. How'd I get so lucky?