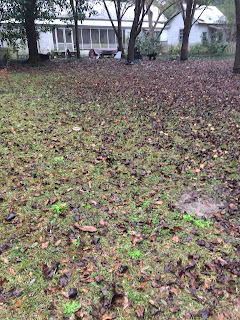 Somewhere in this backyard there is a septic tank lying beneath the dirt.
We assume.
We've lived here for twelve years and never had reason to know where the exact location is and the guy who lived here before us told us that he didn't know either.
Which means that it hasn't been pumped out in almost twenty years.
We have become, shall we say? sanguine about the whole deal. Flush the toilet, take a shower, wash the clothes, all drained where it should into the mysterious magical septic tank.
Until last night. The dishwasher was running and I had my shower on but had not stepped into it yet, waiting for the water to become hot (the distance between the hot water heater and my bathroom is approximately a quarter of a mile, as the crow flies) when I noticed that the toilet was acting as if it were possessed. It began to bubble, water coming up from where it was supposed to only go down, as if a monster of some sort was belching out great blasts of gas.
Argghhh.
I notified my husband who said, "There must be a blockage in the drain in there," but who changed his diagnosis when the same thing happened in the bathroom off the kitchen where he takes his shower. The toilet in there became possessed as well.
"I guess we have to get the septic tank pumped," he said, as he got into bed.

And so it goes. A guy is coming over at four to check out the situation. I can still do laundry and flush the toilet, etc. but not everything at once and quite frankly, it would be awesome to get the problem taken care of before that monster becomes truly enraged and its belches become huger and all of the toilets and all of the drains run backwards, vomiting up what we have been so casually flushing and draining down.

And in somewhat related news, I truly believe that Donald Trump is weary of running for president and has done everything in his power to dissuade voters from supporting him which has only made him more popular which says things about the American voter that are as filthy and unpleasant to contemplate as a septic tank which needs pumping out and that his refusal to participate in this next debate is one last-ditch effort to get himself out of the race without actually quitting. This way he can blame the media for everything. I mean really- would Donald Trump enjoy living in the White House and having to actually attend to presidential duties 24 hours a day for four years? I don't think so.
Of course, I could be wrong. I frequently am. He may actually believe that because he is The Donald and has The Donald Super Powers, he can run the country with one hand tied behind his back and the other hand holding a golf club, a martini glass, and a woman's breast.

So it goes. A hen has just laid an egg. I need to go to the store. And the library. It's gray and supposed to rain and it's getting cold again. Finches of one sort or another are flocking the feeder and the chickens are pecking beneath it, scratching up the seeds that the birds knock to the ground. Chi-Chi and Cha-Cha have eaten all of the cat food on the porch and last night, Maurice spent hours hunting and hopefully eating a mouse in the bedroom.
I should probably go check that situation out. As with septic tanks and certain politicians, dead animals are best dealt with before they start to stink.