A Sort Of Grace

You know- I'm going to be honest with you here- I have said to Jessie more than once, "If Dad had only paid a roofer to do this job, this would have all been done so long ago."
And it would have. My yard wouldn't be filled with tools and roofing materials and scraps of metal and Vergil could have been working on his own projects and my man might not be as wiped-out exhausted as he is every night that he's spent the day working on this project.
What are we? Pioneers? The Amish?

But this morning, as I faced another kitchen full of dishes to be washed after the working-man breakfast, it occurred to me that I have this all wrong. It's not just a matter of saving money, although that part is important. It's also a matter of family. And of time spent with family. Of sitting across the table from August being held by one of his parents. Of laughing over meals, of having my daughter and her baby in my house, snuggling under the covers with Maurice watching over protectively. 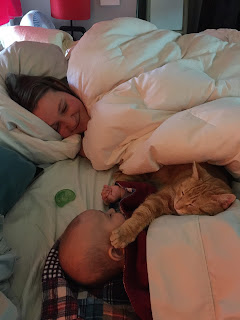 It's having a sweet, tipsy talk with my daughter before bed. It's the men learning together as they work.
What else would I rather be doing than making working-man breakfasts and dinners? Than having my grandson close at hand for cuddles and smiles? Than sharing jokes and memories and anxieties and joys with Jessie?

We live in a funny world where we mostly do pay other people to do the hard jobs that we don't have time for. That we don't know how to do. Everything from growing and cooking our food to putting roofs on our houses. And so many of us are certainly are not suited to those sorts of work and so we do other kinds of work to pay those who are so that their families can be supported.

It's really all about family, isn't it? The very, very best thing about this roof situation is the way that Vergil has cheerfully given up so much of his own time to help us with this. He has given up time and he has given us use of his fine engineering brain and his muscles and his experience to work with my husband who grew up doing things like this with his own father.

There is a certain satisfaction in all of it it we would never have gotten if we'd hired roofers. I'm not saying that when it comes time to do the steep part of the roof that I will not be advising that we do just that. But for now, for this part, despite how long it's taken, it's been good.

Well, that's all I have to say today and besides that, this other cat, Jack, doesn't want me to type any more and is putting his big furry purring body between me and the keyboard.

And look who's up. 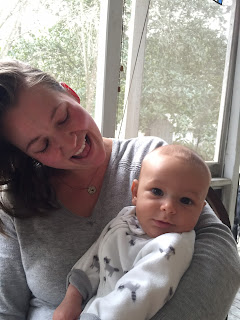