I did something today I haven't done in a very long time. I saw my brother Chuck.
I always call Chuck my first baby because I was twelve when he was born. Mother had another baby, my brother Russell, a year later and probably because I already had a hugely maternal heart and because Mother was almost forty and was having quite a few health problems, I stepped in eagerly and with great love to take care of that redheaded baby boy. His crib was in my room for awhile. I changed him and fed him his bottles and sterilized his bottles and washed his diapers and I look back on all of that and think, how odd, considering especially that I was in the sixth grade and in Girl Scouts and all of that. But I wanted to do those things. I adored that child and I adored Russell when he was born and frankly, they were balm for my soul in that house of pain and fear. They were goodness and light and joy and rightness. And because of my experience with them, I really did know a lot more about being a mother when I had my own children than I would have if not for them.

Chuck and I have always been close. Always. But after Mother died there were some legal issues that managed to drive a wedge between us although now, looking back, I can barely remember what the issues even were, and I see that it all unfolded exactly as it should have but it's like we got in the habit of not seeing each other and he is busy with his job and his children and his wife and his life and goodness knows, I'm busy too.

But today we met for lunch and it was awesome. We went to that Ted Turner place and ordered the same exact thing and talked for two hours, catching up. I felt no need whatsoever to rehash old stuff and he really didn't either and it wasn't as if we were avoiding anything. We lit on the subject of the rift for a moment and then it was done and "well-sorted" as Keith Richards said when he saw his father for the first time in twenty years. We just fell back into our pattern of Chuck-and-Mary and it was good. We talked about kids and grandkids and getting older and stuff like that. He looks great and I was so glad to see him.

So that was really good. Now if we could just get Russell to come up to visit...
Oh, how I miss him.

When I got home, Hank was here. Mr. Moon was helping him with a tire problem that he's had for forever and so I got to visit with him. I heated up some black-eyed peas for him and sent him home with more of those and also some greens from yesterday. And that made me happy too.

It's been an incredibly full past few days and I am tired but in a good way. I had planned to come home and get in the bed and READ but of course, that didn't happen. Besides Hank being here, I knew that if I did that, I would simply fall asleep and it was too late for a nap and way too early to go to bed and so I just took the trash and did some laundry and in a little while, I will make us a supper out of leftovers.

I haven't seen Jack the cat all day long but Luna continues her seeming need to be close to me. 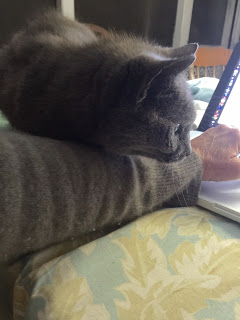 I do not understand this at all. After seventeen years it's as if she's kicked our contract to the curb. Our contract was- I'll feed you and you lead your own life.
We've both been happy with this agreement for all these years but suddenly, she is not. And also, suddenly, she is not drooling the way she has always drooled which was excessively to say the least, and so I do pet her even though she is horrifying in her appearance. I am not kidding you-Pet Cemetery does indeed come to mind when you see her.
Oh well. The aged are not always pretty but when a creature wants your comfort and touch- what do you do? I stroke her thin old fur, she is skinny as a rail, her spine like the tops of fence posts.

Life is funny. Just when you think you know something, you realize you don't.
I was looking at my husband tonight and he said, "What? Is my hat on weird?"
"No," I said. "You are just so damn cute that I can't help looking at you."
Today when he was playing with the boys, I saw him kissing Gibson as he was swinging, grabbing a kiss on every upswing, and then finally grabbing him up on the swing and hugging him as Gibson roared with his husky laugh. And later, I watched him as he worked on Hank's car, his hands black with grease, and, well, I don't know.
I just fell in love with him a little more.

I don't know shit, I always say. But that's not completely true. I know a little bit of shit and then damn- I learn some more.

And mostly what it all adds up to is- the more love the better. Mangy cat love, grandboy love, brother love, son love, husband love.

Sort it out if you can. Bow to the inevitable.

Yours in love...Ms. Moon