Well, I am alive, no worries there. It's just been a very busy day and it's not over yet.
August has what looks to be some minor infection in the pee-pee area and I went with Jessie to to the doctor's today to get him checked out. He's not running a fever and but he's been a little fussy and now he's on a sulfa drug and that's the first thing he's tasted in his entire life except for his mama's milk and HE DID NOT LIKE IT! He fussed and choked and tried to spit it out.
Poor boy.
But the entire office was charmed by him and he got compliments out the wazoo on his smile, his big brown eyes and his obviously superior intelligence.
I got teared up, talking to the wonderful nurse practitioner who took care of August as she explained to me that she'd like to have me as her patient but that no, the office still isn't taking adult new patients and probably won't be as they are trying to ensure the doctor's longevity by lightening his work load and I can see that. He's pretty precious- the same doctor who drove out to Lily's house on a Saturday morning to do Magnolia's newborn exam. I mean, you can't just find a doctor like that every day.
After that, there was a lot of other stuff involving Mr. Moon, a lunch, a drive out to the Tallahassee Auto Auction, and a trip to the library. And also, snapping this picture at the corner of the busiest intersection in Tallahassee. 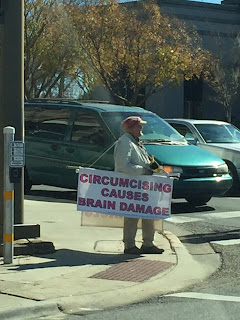 I know that circumcision can cause a lot of problems, including DEATH and that it's very painful for the infant on whom it's performed but I didn't know about the brain damage.
Mmmmm...
Discuss among yourselves if you wish.

Owen got his cast today and I hear it was difficult for him when they unwrapped his bandages and had to clean the area but the good news is that all is healing 100% well.
And here's a picture I stole off of FB. 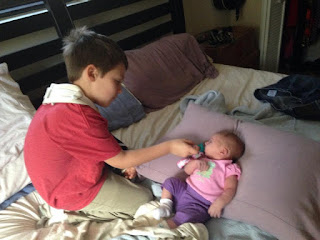 SUCH a good and helpful big brother. I always wished I'd had a big brother and although it was not to be, watching Owen with his little sister more than makes up for that.

So does the number of cats on my back porch which now smells like cat piss (LUNA!) and no, my good mood from yesterday did not spill over onto today. I am not in a terrible bad mood but just feel tears prickling my eyes repeatedly for no apparent reason and last night I dreamed and dreamed and dreamed and dreamed and it wasn't a particularly bad dream, except for a few parts of it, and then, in the dream, I realized it had all been a movie I'd been acting in and I was perturbed because the director had not given me one bit of direction throughout the entire thing.

Aw well. We're going to Jessie and Vergil's for supper tonight and I am looking forward to that.
I hope all is well with you. And have any of you heard from Rebecca? I am becoming most concerned.