I had such a good time with my Gibson today. Rarely in his life have I been able to spend time just with him and so it is a joy when I do get that time. He is a remarkable child and because he is a middle child, I think we take his remarkableness for granted sometimes. When the first child takes the first step or says the first word or makes the first joke, it is a moment of great importance. We try, of course, to give each and every child's first accomplishments the same attention but life is funny and we don't always.
But Gibson. Oh my.
The other day when we were in the Indian restaurant, I bent to pick up a piece of cantaloupe he'd dropped and he said, "No, Mer. Look. I holding it down!"
And he had his fork poised just so over the bit of fruit so that the shadow cast by the fork perfectly covered the cantaloupe and yes, he was holding it down with the fork shadow.
I am not sure I've ever met a child who was so good at playing and pretending by himself as this boy is. I've talked about this before- how he can take almost anything and entertain himself for great lengths of time, making up little scenarios with whatever he has to hand, providing dialogue and action. 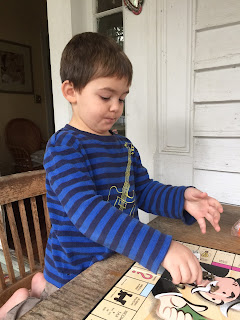 Here he is using the Monopoly pieces to do just that. A little while later he added the houses and hotels and he played and played until finally he said, "That's enough."
And it was and we went out to swing.
He is very social too. He loves to play what we call The Matching Game with me and he is generous with his praise and seems to enjoy it as much when I make a match as when he does. My across-the-street-neighbor came over for a little while when we were on the side porch swing and he was completely comfortable talking to her and telling her things. When she went to leave, he held his arms out to her and hugged her tightly. He is a charming boy.
He wanted to take a bath and so I drew him one, adding some bubbling bath salts with lavender. He enjoyed that so much. 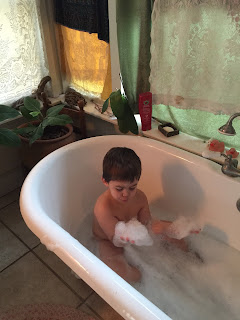 When he was ready to get out, I used the hand shower to rinse the bubbles off of him and he loved it. I let the warm water run down his back and he kept saying, "That hits the spot!"
He gave me a bit of a make-over and then we went outside and when a train came, he wanted to come in because even though we both know that his fear of the train is highly exaggerated, he is still a bit worried about it and it IS loud and it IS close so I said, "No, let's watch it!" and we did. We sat on a chair and I held him and we had so much fun, watching the cars go by, those loud thundering iron cars, each one making its own different sound as it passes.
When we did come in, he wanted to snuggle and this is another very fine thing about Gibson. He's about the snuggliest, cuddliest child you will ever meet. We got on my bed and pulled up the comforter around us and he molded himself to my body and we pulled the cover over our head so that it was dark and scary and wonderful and we pretended to sleep and we pretended to wake up and we freed our heads and then we did it all again. He wanted to watch Toy Story from my bed and he wanted me to watch it with him and so that's what we did but when his mama and his sister and his brother showed up he wanted us to hide under the cover and we did that too, giggling a bit as we held still, and I swear, I felt a little of that child-like delight in waiting to be discovered.
And then it all changed after Owen found us and we hugged and kissed the mama, the brother, and then Maggie. 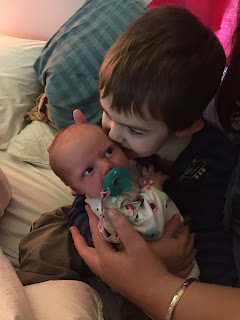 I changed her on my bed and she peed before I had the new diaper on her and she peed so much that my sheets are in the dryer now and we all laughed at how much she was able to pee, this tiny girl, this wisp of a child and even her booties got soaked.
Boppy came home and there were more hugs and more kisses and more cuddles and there was nursing and Magnolia spent a good five minutes looking around and letting us kiss her. Then she got the hiccups which distressed her and so there was more nursing.

Such a good day. The weather was positively spring-like, warm and with those soft breezes that are both cool and balmy at the same time and I found a trillium, already coming up in the bed beneath the front-yard oak. I made a cheat-chili with canned beans and canned tomatoes and ground venison and Mr. Moon is back outside, working on a car and I'm going to make him the salad he loves with greens from the garden and the mandarin oranges that come from a can and sunflower seeds and cornbread to go with it all. I promised the boys they can spend the night on Friday. They haven't been getting enough time at Mer and Bop's lately and it's time.

And here's a picture that Jessie sent me today of my other beloved grandson. 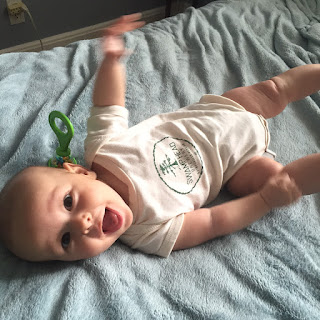 One day, soon enough, he will be old enough to spend the night at Mer's. Well, eventually. He's not yet even had a bottle so it will be awhile unless his mama spends the night with him.
But if I know anything about time, it is that it flies by too quickly, too quickly by far, and that day will be here before I know it.

But this day- this day I mostly spent with Gibson- is now right here, in this magical place we call the internet, and I can come back anytime that I want and remember it all. The bath, the games, the pirate pretend we played on the swing, the cuddles, the snuggles, the kisses. Like the fork shadow, I have held it down.

It all just hit the spot, y'all. It really did.