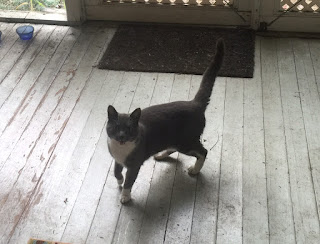 Jack Ballsack didn't show up all day yesterday and I was thinking that perhaps his people had been out of town and had now returned.
No such damn luck.
He's eating his third bowl of food this morning.
Yes, yes, goddammit, I feed the cat because I AM A FEEDER!
Just like Jesus who took three loaves of bread and two fishes and fed five thousand people and there were 12 baskets of leftovers after the great feast.
See, I am reminded of that because I am listening to The Gospel According to Judas, written by Jeffrey Archer and a Roman Catholic theologian named Maloney (he has only one name? like Madonna? really?) under the name of Benjamin Iscariot. It is narrated by none other than the Archbishop Desmond Tutu and no, this is not my usual reading material but what the hell?
It is short, a novella, rather than a novel, and as I listen to it, all I can think is, "Whoa! That Jesus was one crazy motherfucker!" Also, it appears to me that the people who came to listen to him didn't give a fuck about his message but instead, wanted to be healed of their various afflictions. And eat a free meal, I guess.
I am also reading in real book form a novel called The Book of Strange New Things by Michael Faber.  It is a bit science-fictiony as well as a bit dystopian and is about a Christian minister who has gone to an outpost on another planet to minister to the natives there. The preacher is a fairly likable character. He's not a smarmy Christian and was saved from his life of drugs and crime by the love of God and so forth and it's an interesting book and I swear to you- I am going to finish reading it today or know the reason why.

That's my main plan for today. That and to get everyone's birthdays written on the official 2016 Virgin of Guadalupe calendar 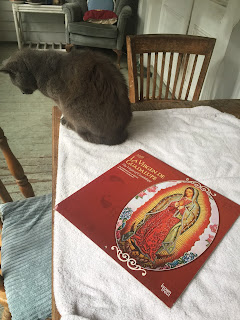 and perhaps to write a letter in response to one I got ages and ages ago.
I don't even know if I still have handwriting ability.

Cats. Cats. Cats. Luna wants my attention. Maurice is pissed. Jack has finally finished eating. Thank god for my chickens who demand nothing of me whatsoever. That which I give them is freely given and taken by them without apparent gratitude which is fine by me. They lay eggs, yes, but that is their way and they aren't doing it for my sake.

Speaking of which, either Old Miss Trixie or Old Miss Mabel laid an egg yesterday. 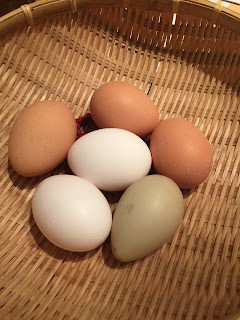 I was shocked to find that green, pointy egg in the nest but there it was. Neither one of them has laid an egg in the past year that I can recall.
This may be a miracle but I don't think that Jesus was involved.

All right. Time to get busy. Doing very little.

Let's all have a Sabbath day, okay? and goddammit, try to keep it holy.

Yours in loaves and fishes...Ms. Moon