A Bit Of Activity 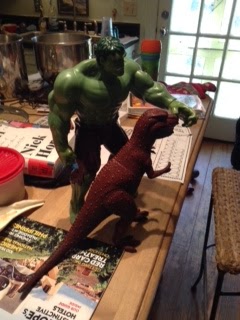 Well, I did do everything I said I would this morning, and even took a good walk but it took me all day long. Still- no complaints.

I offered to go and get Gibson and to pick up Owen and to keep them for a few hours so Lily could get a good nap in. She gratefully accepted so I did that and those boys were WILD! First day back at school for Owen and first day without his brother in awhile for Gibson so they were like puppies when they got back together.
And this- when Owen's teacher helped him into the car she hugged him hard and said to me, "I want you to be aware that you not only have a reader here, you have a writer!"
She is such a special woman and her care for the children is just so blatantly and beautifully honest.
Yes. Owen is beginning to read and even to write and I couldn't be prouder of him if I tried. He takes our praise with casual aplomb- he is simply doing what he is supposed to do- but oh, what a beautiful thing to see happening. And his parents have so much to do with this. They work with him and make games of letters and sounds and that is how it happens. Not just in the classroom, but in the home as well.
And so it went today- busy and good and when I took the boys home, their mama was glad to see them and they were glad to see her and as they tumbled out of the car, Owen said in a gruff funny voice, "I love you, Gibson," and Gibson said in his husky voice, "I love you too, Owen!"

We will eat our soup and oat bread here soon and I want to get to bed early because that little girl is due to be born soon and I need to be rested and well when I am called.

Oh! Did you see the President's speech today? My god. And of course certain Republicans are already saying that his plan to tighten up loopholes in gun purchases is "over-reaching his authority badly."
Or some bullshit like that.
Meanwhile, there's those guys in Oregon who are becoming the biggest joke in the news with their antics.

Now see- I said I wasn't going to do this- let the news disturb my sense of peace.
Ah well.

I can't do anything about any of it but I can go bake the bread, satisfied in knowing that I have done my best in my own tiny part of the world today and quite frankly, that is enough for me.