What a day! Once I finally got moving, I moved right along. I went shopping at Publix and it WAS a pleasure, in that I ran into an old friend from Monticello and we stood right there and caught up and both of us teared up. Golly! She's such a beautiful woman! I miss her.
We talked about how incredibly busy we are and how this is NOT what we imagined our sixties would be like. I hugged her about fifty too many times for appropriateness. And I don't care.

When I got to Lily's someone had already snatched my baby. 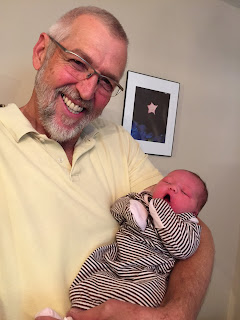 I couldn't be too harumphy about it though. Look at that smile. And I got to hold Magnolia June while Lily and Jason and Boppy ate the sandwiches that Boppy had brought over for their lunches. I'd already eaten which was nice because I got to cuddle and coo. 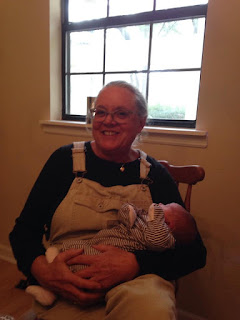 Hank came over to meet his niece. He had to work last night so he was late to the party but I think Maggie probably will forgive him and I know he fell in love with her. 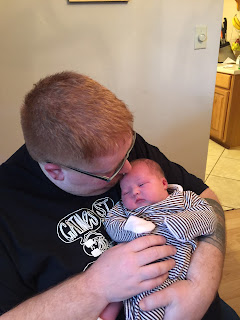 After lunch, I made Lily pose with her daughter. 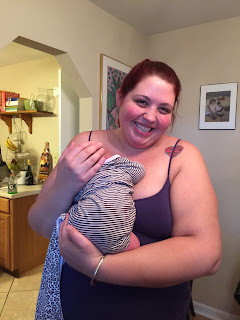 Do you think she's happy?

and then they got back in bed and Lily nursed her sweetling for awhile and then I got to visit with her some more. I laid her down beside me and let her hold my finger in her strong, tiny grip (we are all monkeys) and I just beheld her and could have stayed right there all day watching her breathe, the air all pink around her. 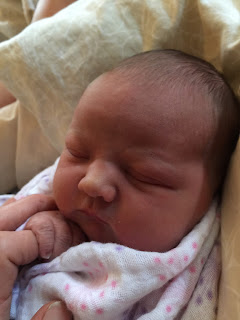 Owen told me that he has been watching his sister for his mother when she needs to do things. Lily puts Maggie in the bassinet and Owen stands watch. He called for her today when his sister spit up. We are very proud of him.
I convinced the boys to get in Mer's new space car and come to her house for awhile. They love the new car, as do I. They figured out the levers to make the seat backs move and they laughed themselves sick all the way home, making the backs go down and come up.
"It never gets old!" said Owen.
"Y'all stop that!" I keep saying. "Don't break Mer's new car!"
"Okay!" they said. Then they kept doing it.
Oh well.

They sort of kicked back here, lying on the bed and watching youtubes about superheroes. I figured they needed the down time. And although Owen claims that his pain level is only at a three (he seems to really understand this scale), I can tell that his arm is bothering him when things grow quiet, and he has little circles under his eyes. Speaking of which- when we left the clinic yesterday they gave Jason a prescription for Owen and I picked it up today. Ibuprofen has been handling his pain pretty well but they gave him a 'script for 90 Tylenol with Codeine.
For a six year old child? Are you fucking kidding me?
We were stunned.
Nothing could go wrong with that plan, right?
I'll be surprised if he takes five of them.

Anyway, we read a book and we had snacks and we played Monopoly, or at least our own version of it. Then Boppy got home with the remote-controlled helicopter that he and Jason finally got out of a tree today. He glued it back together where it had been damaged and then Jason came for the boys and they had a grand time flying it. Or rather, Boppy flew it. 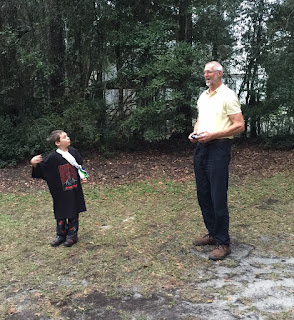 Owen telling Boppy how it works. 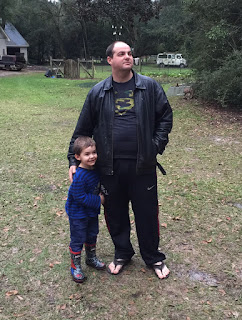 Owen was so ready to go home. He had asked me a little while before his daddy got there when they were going home which he never does.
"Do you miss your sister?" I asked him.
"More than ever," he said gravely.

And now it's just Boppy and Mer at home and I'm going to make egg rolls, one of our favorite meals. Tomorrow I will make Lily her salad and cake and bread.

Yes. Yes it does. I'm hanging on by my fingertips as life here seems to be swirling so swiftly.
And trying to breathe and remember that all of this is nothing BUT life and realizing how all of it is born of love. We were talking today about how if I hadn't met and fallen in love with Mr. Moon, none of us would have been sitting around and having that exact conversation. But as Hank pointed out, if I had not, there would be another place and another conversation. So hard to comprehend, but so true.

Okay. Too much philosophizing for one night. I need to go chop vegetables and wrap them up snugly in their wrappers and bake them. All of this is life, or at least life as we know it.