We're all sort of tired here tonight. The men because they worked on the roof all day and the mama and the MerMer because we just are.
I still don't know how I spell MerMer. Is it that way or Mermer or Mer Mer or what?
I think I like Mermer. Henceforth, this is how I shall spell it.
Until I forget and spell it differently.

Jessie and I ended up going into Tallahassee because the men needed a drill battery at their house. So we dropped by there and then we met Hank and Taylor for lunch. Yeah. We're lunch crazy. But it was such a nice day and we ate outside on the deck of a Mexican restaurant and even Taylor held August.
I say "even" because Taylor is wary of babies. She says she doesn't like them but look at this. 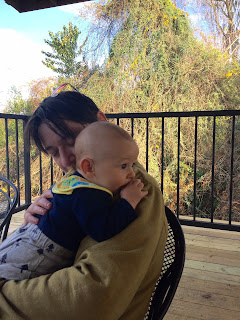 And August just relaxed on her shoulder and held on to her and drooled on her jacket and was as happy as he could be. I'm pretty sure I even saw her kiss the boy. Once. Or twice.

So it was a good time and now we're home and supper is cooking and everyone's relaxing. August learned to make raspberry sounds with his mouth today and he is enchanted with his trick. He also learned to play the caterpillar. 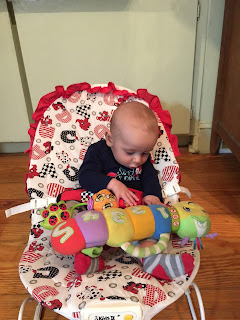 As you can see. He is one busy guy, that August.

Hopefully, he'll sleep good for his mama and daddy tonight. I know that I will sleep well, not having one ear awake to listen for Gibson, looking for his Mermer in the night.

You do too, dear friends. You sleep well too.