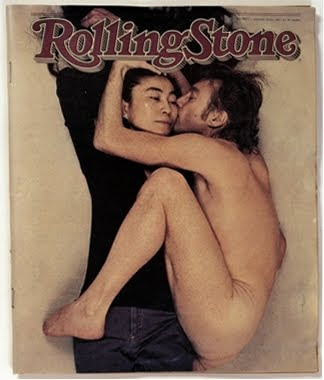 It is December the eighth which means two things to me.

One, I was married the first time on that date in 1975. Thirty-four years ago. The marriage lasted long enough for us to produce two children who have made my life so much more interesting and loving and joyful than anything I could ever have imagined. And I am still friends with that man, even if the marriage didn't last very long. He is a good man and I am grateful that he is still in my life in very positive ways.

The second thing I always think about on December 8th is John Lennon's murder. I don't want to talk about that. It was a very, very bad thing that happened and I still mourn him and I still love him and I miss him so much.
But I remember him on this day and I have to mark it because it is important to me. A lot of dreams died the day he was shot and a few of them were mine and they involved my marriage.

I love the picture you see there of John and his wife, Yoko Ono, which was taken right before he died and which says everything to me: Be naked and don't be afraid to love, no matter what the world says. Every love is different and every heart can find its mate.

John could have married any super model in the world. He could have married a princess or the daughter of a president (and wouldn't that have been crazy? John Lennon marrying, oh, Richard Nixon's daughter Tricia?) but he chose a Japanese artist named Yoko which the world, believe me, did not approve of.

But he loved that Japanese artist and before he died, they had created a child together and spent some years at home raising that child and baking bread and being a mother and a father and I can't but think that John did an awful lot of healing in those years with that wife he called "Mother," that woman he loved. And then, they went into the studio together and created one of my very favorite albums of all times, Double Fantasy. If you've never listened to it, I am sorry for you. It was and is amazing and honest and it has saved my life on more than one occasion.

The Beatles said, "All you need is love," and I believe John meant that. It may sound simplistic and it may sound trite, but when you get right down to it and really know what love is, nothing truer can be said.

And on December 8th, I think about Yoko so much. John was released. It was tragic. But his pain did not last for long while Yoko has had to live with hers for all these years.

I give you this. I hope you watch and listen because there is something so deeply and profoundly moving about it.

Love is all you need. Woman is the other half of the sky. A bullet ended a life. It did not begin to end what John Lennon created, either publicly or privately and I send this out to Yoko who loved him into something very much like peace. Love is always good, even if a marriage ends, even if a world doesn't understand a marriage. Fuck that shit.
Be naked.
Love. And don't be afraid.