Buddha Has Man Breasts. So What? 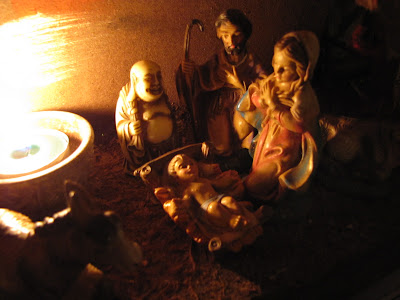 All right. I did it. I put up the nativity. I bought it back when Hank and May were little bitties and it's been the one we've used every year since. It's simple and was cheap and there are Mary, Joseph, the Baby, an angel, a donkey, a cow. Done.

Of course we add the Buddha because one year Hank set it all up and put the little laughing guy in there and we love it and so he jumps off the rock perch he sits on all year and trots into the manger to share the Godliness, the Goodness.
Why not?

I do not feel especially holy or happy or any more filled with the spirit, although Garrison Keillor is in my ears and there is sacred music playing. Ms. Elizabeth, over at The Moon, Worn As If It Had Been A Shell talked today about going to see Handel's Messiah and how it seemed as if surely religious music had been inspired by the Divine and I know what she means but the best music, the best art, is always inspired by the Divine, whether it was written in the name of worship and celebration of a god or just in celebration and worship of the Divine itself, whether Beethoven's Ninth, Handel's Messiah or the Beatles' Sgt. Pepper's Lonely Heart's Club Band.
And when I say Divine, I don't know what the hell I'm talking about. It's different for each of us. I'm pretty sure about that.

Anyway, Mr. Moon and I went to Thomasville today to do a little shopping in that sweet little old city. We didn't buy much. We went to lunch at the Farmer's Market Restaurant which is pretty divine itself. Three types of greens (collards, turnips, cabbage) and three kinds of beans and rice and rutabagas and fried chicken and fried zucchini and baked chicken and roast pork and barbecued pork and the best yeast rolls you ever ate. Not to mention a whole lot more, plus the desserts.
The old lady who sits at the door and collects your money always asks Mr. Moon the same question which is, "How tall are yew?" in the most southern of southern accents, her dyed-platinum hair sprayed into hurricane-proof glory. And then she proceeds to ask if he ever played basketball, etc.
"Fifteen fifty," she says, collecting our money. "And that includes coffee."

I told her I'd lived in Florida since I was five but she did not seem satisfied with that. I wish with everything I had I'd asked her what she wanted me to answer. Did she think I was really from New York? California? France?
Metcalf, Georgia?

I do not know but I'll be pondering this for days.

I probably should have told her I was from Old Hippie, USA. I think that's what she suspected. And if so, she was right.

When we came home, I went out and picked up branches and sticks that had fallen in the yard and I think we could have a fine Christmas Eve bonfire. It's amazing that last Christmas we celebrated and didn't have a clue that one year later we'd be passing around a fine little baby boy among us. And it's hard to believe that by next year, we'll have to keep close watch over him, to keep him safe from danger as he glories in his new-found ability to walk.

Another thing I did when we got home was to cut some pine cone lilies and camellias to put in vases and the last of the roses as well. I cut some African basil to root for next spring's planting. I plugged in the Bad Santa, the lights on the front porch and the Christmas tree. I gave the flowers and pine cone lilies to the Virgin of Guadalupe 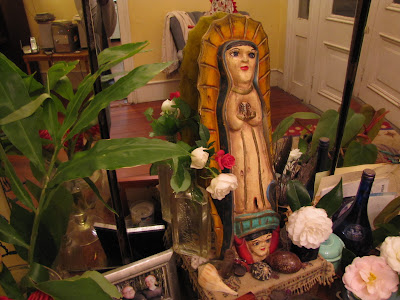 and I noticed that once again, my retarded datura is ready to bloom the night before the first frost.

Look- we don't always bloom when we're supposed to. That's the way it is. Some of us are more joyful about things when we're not exactly supposed to be and less joyful when we are. I talked to an old friend on the phone today and he was talking about how much he hates Christmas and how much his wife loves it, walking around and singing Christmas Carols and buying presents and he's just really trying not to be a butthead.

"Oh yeah," I said. "That'll be a big best seller. A lot better than all those books whose message is, 'And then I realized what the REAL meaning of Christmas is,' blah, blah, blah."

He was out at midnight last night, drilling into his new front door to hang a wreathe to make his wife happy and I put up the nativity today.

We do what we can.

In other words, the planet of Batshit Crazy.

Eat a sugar cookie, okay? It's Christmas whether you're snowed in or the temperatures are in the seventies or your Christmas tree is an iron plant stand.
Buddha would not only approve, he would laugh.