I'm So Vain. I Probably Think This Post Is About Me. 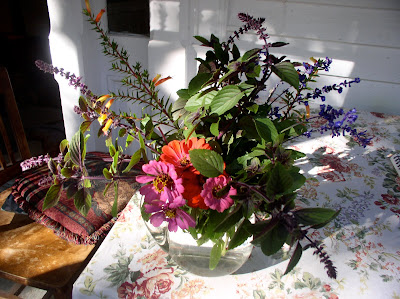 I have the saddies today. I'm not sure why.
Maybe it started last night when I looked down at my legs while I was brushing my teeth. It was a horrifying moment. I've always had legs that are decent, if I do say so myself, from ankles on up but when I looked at them last night in the stark white light of the bathroom, it was as if someone had come and taken my very own legs and replaced them with the blobby white legs of some blobby old white woman and it was enough to make me want to fall down on the floor and cry.

But what can you do? Finish brushing your teeth, rinse, spit, get in bed. Go to sleep.

Today Mr. Moon and I brought all the tender potted plants in and it killed me that although I know I can still lift and carry some of the bigger ones, I should not. I'm already in pain all the fucking time and why make it worse? Do I want to permanently cripple myself? And so I flittered and fussed about Mr. Moon as he lifted some of these huge plants and brought them in and I made cuttings of the firespike to root for next year's planting and some cuttings of some of my favorite begonias and stuck them in pots in case something horrible should befall the mother plants. But I felt weak and pitiful and then I slipped on the mildewed back deck and fell and if there's anything that makes me feel older and more pathetic than falling, I don't know what it is.
Fuck. As if my foot didn't hurt enough already. And then I just started to cry. Not because I hurt myself badly, but because I am getting older and that's just the way it is.

I cut my last blooming zinnias and some African basil and a few other things still blooming because it might freeze tonight and if it does, all these things will be nothing but brown mush by tomorrow afternoon and that made me sad, too, although I made a bouquet of them which is beautiful and aromatic with the basil. And then I had to cut back my beloved mango tree. The one in the pot I started from a seed I got from a mango in Roseland, my childhood town, the same tree we ate from when I was a just a little river and jungle-rat there, running around brown and fat with mango fiber between my teeth and howling when I stepped on a cactus. And I know it's okay to cut my mango tree back. It has to be cut back in order to save it and for it to continue to live in a pot and it can't stay outside in the ground because it will freeze.

So I guess it's just all of this- it's winter, truly and time to face the fact that if I don't do something about my plants, they will die, and no matter what I do, I'm going to die one day, too. And it's not death I'm afraid of. It's this slow degeneration of the body which cannot be halted because it is part of life.

I cannot be made young again. There is no way. And look- it sucks. I'm not going to lie to you. I do think older women can be and are beautiful. I'm not saying that it's not possible, but I'm also saying that to lose my legs' fine form seems like more of a cruelty than I can bear somehow. I know it's not a big deal. It's not cancer. It's just time and gravity and age and life.

But I'm sad. Because it's not just how things look, it's how they feel and how they don't work like they used to. And somehow, some way, I didn't think it would happen with such rapidity. Just like every year I can't believe it's going to freeze, but it does.

I'll leave you with a memory. It's from when I was a stupid-butt-headed teenager and my mother, probably in her forties at the time, was doing some sort of exercise routine with those pulley ski ropes you attached to a door handle and all I could think was, "Why?" I mean, she was OLD and it wasn't like she was going to date again (although she did, years later) and it wasn't like anyone cared what she looked like.

What I didn't realize is that SHE did. She cared. That there is no off-button to the caring about how we look. We may not be as vain as we were when we were young, but dammit, we're always still vain. Even if we mostly live in overalls and we muck out chicken coops. We want those legs under the overalls to look good. And be strong and sturdy and capable of carrying us for a long, long time.

Not weak and with blobby flesh hanging around our bones.

We want to look as good as we can and for a long time, that's not so bad. It's good enough.
For a long time.
But not for an endless time, it would appear.

Winter. Fuck winter. Why do you think all the old people move south? It's not because they can't take the cold. It's because they hate the reminder of every year's passing, of everything dying. We know spring will return. To the earth, anyway.
But never, not the way it once did, to us.

And I'll try not to write about aging any more for awhile. I promise. At least until that beautiful bouquet passes on. Okay? Deal?