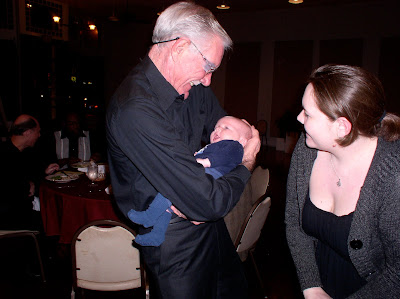 When was it? Sometime back in the late winter of this year and we had taken the Opera House production of Later Life on the road to Milton, Florida and one of our actors and his wife were taking every opportunity to hold each other and whisper to each other and I knew something was cooking. Something being a baby. My mama instincts told me so.
"Jon," I said. "What's going on with you and Stephanie?"
"Nothing," he said, "Why do you ask?"
And Jon's a terrific actor but he couldn't fool me. No sirree. Not for one second. He talked to Steph for awhile, whispering into her ear, and then came back to me and said, "We're going to have a baby."
Well. I knew it and so did Kathleen and we tucked their secret into our hearts and smiled.
Jon and Steph were wanting a baby and had had one miscarriage and so the early days of this pregnancy were sweet but scary, too and that's why they were staying quiet about it all. But time passed and it became apparent that this budding life was going to stick around and everyone shared their joy. His parents and hers, their Opera House family- everyone was so happy for them.
And when the baby was born on October 24th, he was named Colin, just like our beloved Colin who makes us all laugh and who is our British stiff upper-lipper and swashbuckling, Levi-wearing, handsome boy who flies airplanes and makes lasagna and beef stew and who paints the ceiling of the Opera House and has a beautiful French girlfriend who adores him.

Jon is in the production of Mr. Spaceman and so is Colin and last night Steph came along and brought Baby Colin and when Big Colin held him, all the cameras and iPhones were whipped out and it was like a Paparazzi moment, right there in the Opera House. Big Colin and Little Colin and there you have them in the picture above, along with Mama Stephanie and oh yes, in the background you can see Famous Author at the table.

The readings went well. No big surprises and no big audience, either, but the one that was there was attentive and laughed at the funny parts. I was nervous, I admit. It was such a different situation than being in a play. We didn't have to memorize anything and we didn't have to move from here to there or remember to pick this up or set this down or bring this onstage. We just had to get up from our seat when the time came, stroll to the mic and say our piece. And it was fairly short so when it was over, my adrenalin hadn't really found its outlet, hadn't really had a purpose to be spent on.
Odd.

But it was sweet, sitting there in a row, the six of us, waiting for our parts. We are a sort of family there and I have to tell you that the people I read with last night are among my very favorite people on earth. It reminded me of the old days, before I was born, even, when there was no television, and people gathered in their homes to listen to readings and music after dinner and drinks and coffee. The Opera House is like my other home, to tell you the truth, and so there we were, intimate and doing this little thing together with an audience.
Yes. Another family.

Our Famous Author seemed pleased and not at all disappointed by the turn-out. It was a cold, drizzly, dreary night and we appreciated each and every person who showed up to listen to us. It wasn't a drinking crowd, it wasn't a rowdy crowd, but it was a listening crowd and made up of quite a few people who have acted at the Opera House in other productions.
I was proud to be part of it and I am looking forward to tonight so that we can do it again.

I'll be sitting next to Colin, trying not to laugh at the things he says to me and failing miserably.

Last night I looked down at myself to check to see if I had any strikingly large random bits of anything on my black shirt and he whispered, "Are you checking out your breasts?" in his most perfect British accent. "No," I whispered back. "I am not."
"Don't lie to me," he said.
And I giggled while trying to maintain my dignity.

And that's Colin and that's our Opera House and Little Colin is going to grow up there, such a different sort of baby than my Owen who is long and lean and like a wire, strong and pushing and always demanding to be held, to be entertained, to be loved while Little Colin is a peaceful Chunkamonk who curls up and relaxes into a smooshie ball of love, completely comfortable wherever he is, and is happy to meet new people, be held by anyone who wants to hold him and there you have it- The Opera House on a Friday night, Big Colin and Little Colin, a part of the family that makes it all up.

The magic of the Opera House. Which I am so lucky to be part of.
Posted by Ms. Moon at 9:07 AM