Let's have truth in advertising here.
The other night when I took that glam shot of me with my hair down, I was in a good mood. I'd just gotten home from the Opera House, and I sat down and took that picture. I wasn't wearing make-up so it wasn't entirely fake. I mean, it IS a picture of me and how I looked for one happy millisecond of one night of my life.

Well, today's another day. This is how I look this morning: 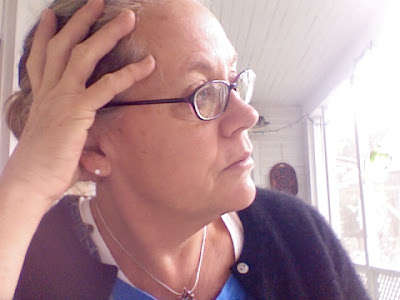 I overslept. Why? I do not know. Because I am lazy. And then when I did get my lazy ass out out to the chicken coop, we know what had happened. Miss Betty's head had been pecked again and I'm not even posting a picture of that because it's just so sad. She is, as we speak though, on the nest and laying me an egg. My heart breaks for Miss Betty because she is a darling chicken and I, the very bad chicken mother, keep letting her get hurt.

Frankly, I want to get rid of Sam, as I have said. He's wearing those hens OUT. Betty is the only one he pecks, but he's got all the hens' tail feathers messed up from grabbing on during the act of love. 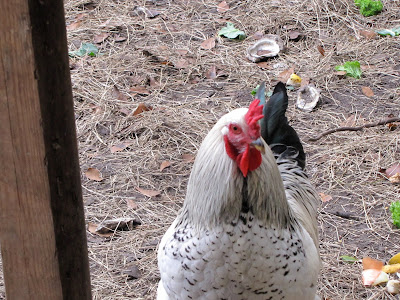 Anyway, while I was letting Miss Betty out the other chickens were rushing me as if they hadn't eaten in a decade and they always have food but they want me to, I don't know, rearrange it, I guess. So I did that and gave them fresh water and the whole time they were trying to get out of the coop and acting insane and then I noticed that two more of my neighbor's chickens had escaped their fence and are now pecking around my yard, meaning my garden is going to be gone soon. My neighbor has dozens of chickens as well as goats and donkeys and a turkey and I don't know what all. And her yard, where the animals live, is completely and utterly devoid of any sort of growing thing and god knows a bug doesn't have a chance in hell over there so those chickens look at my yard and say, "Hmmmmm."

And there you go and before you know it, this whole two acres is going to be a fucking chicken ranch and look like her yard, which is sort of like the Sahara desert. I can't catch her damn chickens. They're feral and scrawny and run like the wind. I need to call her up and say, "Caroline, come get your damn chickens," and she will. She'll probably rope them with a lariat or throw a net over them because she's tough and she knows how to deal with animals. It all just seems overwhelming though, the thought of Caroline tromping through my yard, yelling at her chickens. And then they'll just jump back over the fence.

So that's the chicken story for the morning and I have to get out there today and clean out the coop and the hen house because it's nasty.
You can write your name on any piece of furniture in this house, too, and that's another thing I haven't attended to.
Christmas?
Hell, Jessie and I went to town yesterday and we bought a few presents. A few. That was actually fun, rummaging through the antiques/old stuff store and she sat and played a cello while I picked up and considered many items.
So at least I've begun.

And yesterday, in yoga, an entire novel appeared to me and I was so excited I came home and wrote for about an hour and it was flowing, going, towing my fingers along with it and then I had to put it away, save it to the desktop so I could go Christmas shopping and today- well- I have so much to do. And Owen is coming this afternoon and as we all know, times stops when he's here and I am nothing but arms for him and kisses for him and you can forget getting anything at all done, up to and especially a novel that starts out, "He didn't mean to rape her."

Happy jolly holidays to YOU too.

But, as Jessie said this morning when I started listing all my faults and defects and all the things that needed doing and how lazy I am, "Why list all the negatives?"

So here's a postive: 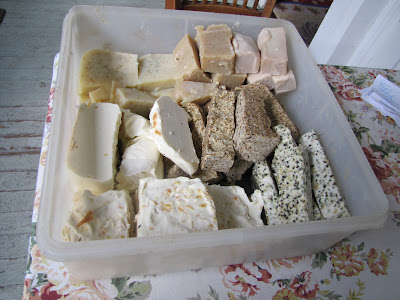 That's my soap, all cut up and aging nicely. I think I went a little crazy with the amount of rosemary and also oatmeal and rose buds I put into the various mixes. Well, live and learn. It's SOAP not SOUP and some of us need to learn the difference. There is some of Kathleen's soup in there too and it is perfect. I washed with my rose and oatmeal soap last night and when I went to bed, Mr. Moon couldn't stop telling me how good I smelled, so perhaps all is not lost. It certainly feels good.

So that's a postive and so is this: 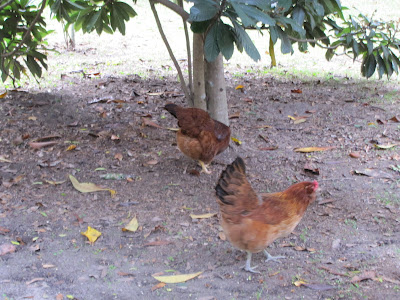 Two hens scratching under the loquat tree and for some reason, that just makes me happy. Those are my fine, fat hens and they wanted (demanded) to be let outside this morning and so I let them out and now they're busily scratching around the yard. It's so funny how the cats just look at them with what could be terror in their eyes. I had worried about that because my cats do hunt and bring me squirrels and moles but they sure don't seem to have the balls to attack a chicken which shows that they are at least mildly intelligent.

So here I go, off to attend to laundry and chicken coops and furniture and family matters and that's what it's like in Lloyd today. Jessie's here and has been hanging out for a few days and that surely makes me happy too. "I can't even remember sleeping when I'm here," she says and that's another positive thing. I love it that she can lay her head down and rest so deeply that she doesn't even remember it.

And oh yes! Hank is coming out today with a friend from out of town and I'd forgotten that and that will be lovely, too. I'll have my son AND my grandson here and maybe a daughter because I don't know when Jessie is going back to her exciting life in town where she lives. She complains because when she comes to Lloyd she just forgets to leave. Mean Aunt Jessie. She makes me so happy.

I'll take a shower with lovely soap before I go pick up Owen and there you go- another day of chores and joys and getting dirty and getting clean and if that's not life, I don't know what is.
Posted by Ms. Moon at 9:46 AM