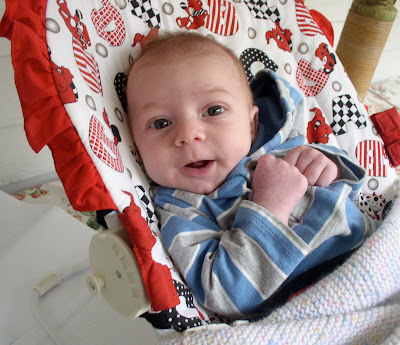 Do you dream of your blog? I do. Last night I dreamed I wrote a post and the picture that accompanied it was a picture of Owen in his little seat in one of the seats of the Opera House. That sort of sums it up. And I don't have a picture like that but I do have pictures of Owen (that one was taken yesterday) and I do have pictures of the Opera House but I can't find them and I feel frantic today to get things done so there you go. You get Owen and if that's not enough, sue me and examine your heart.

So this is going to be what I call a brown paper bag day- I give you all a bunch of stuff and I throw it in a paper bag and hand it over. Think of it as the surprise bag you can buy at the Dollar Store marked "Girl" or "Boy" only this one is for everyone who wants it. Of course what it really means is that I am too scattered to sit down and write what I would call an essay and my mind is flittering about like a moth on the light bulb at night and I can feel the presence of a toad, just waiting for that moth to hit the light, sizzle, and fall into his mouth.
Yum. Cooked moth.

So the reason the Opera House is in my mind is that this weekend is the reading thing we're doing with Robert Olen Butler from his book Mr. Spaceman. Tickets are not flying and Jan is a bit panicky. I understand. This was her idea, she arranged it and people are not responding. Well, Jan- let me tell you this- it was and is a GREAT idea and even the author thought so and agreed to participate and it'll be what it'll be and it's going to be fun.
But for any of you living in this area, you might want to consider driving down Highway 90 on Friday or Saturday until you get to Monticello, pull over, park (anywhere) when you get to the Opera House- you will know it- it's right before you get to the County Courthouse on your right- and join us. Dinner? Available. Drinks? Always. Ghosts? Probably. Me? I'll be there.
Wearing make-up AND a bra!
Oh yeah, so will Mr. Butler. Be there, I mean. I don't think he wears a bra although I don't know about the make-up. 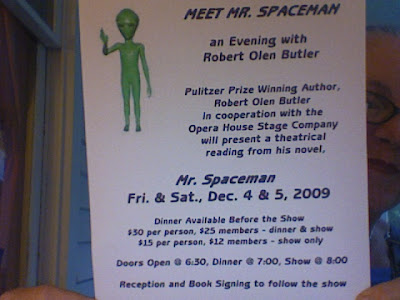 Okay. On to chickens. When I went out to the hen house this morning to take Betty outside so that she can spend the day without being pecked by Sam, her former Lover Man Rooster, she jumped right off the roost and ran outside. Bless her tiny chicken heart. It's raining right now so I made her a sort of shelter outside with a roof and some hay so that she'll have a place to get under. Poor baby. She is starting to try to follow me back to the house now. She thinks I'm her flock. Either that, or those grapes I cut up for her daily are making her fall in love with me. Either way, it was nice to see her so cheerfully head outside where she spends her day scratching and dirt-bathing and finding tasty bug and frog morsels.

Bobby Bowden has retired. Who the fuck is Bobby Bowden? Simply the God of Tallahassee, aka the FSU Seminole football coach. Well, he was the God until he started losing regularly whereupon everyone turned on him like mad dogs and let's face it- dude is about a hundred years old. Now I don't give one damn shit about football or Seminoles yet even I have not been able to ignore this situation. And when I got the paper this morning, the entire front page was dedicated to the fact that yes, he has finally decided to go to his palacial home, dandle his grandbabies on his knee and let someone else take over the job of coaching. And it wasn't just the front page. It was like THE ENTIRE PAPER!

Could we move past this?

Also Tiger Woods. Bless HIS heart. What? He's human? No fucking way. Do I need to know the details of that little incident? No. I do not. Could we shut up about it already?
Obviously, no.

I've recently reconnected with an old friend who is a much beloved figure in Tallahassee and actually, all over the world. She's a singer and because she is somewhat of a celebrity, I have always been shy around her. And it always seemed to me that people wanted something from her. Either to play this benefit or that, or to sing on their CD or to hang her name on their project, and me? I didn't want her to think I wanted her for any reason like that and so I sort of let her go. Besides singing she also taught English at the local community college for like fifty years and raised a son on her own and was one of the first black teachers hired at the college and her plate has been FULL. But now she's retired from the college and she's doing what she wants to do and she called me the other day and we talked for about an hour a a half and now she's reading the blog and let me tell you- The Church of the Batshit Crazy has Another Official Vocalist now. Lis, of course, is our first. (Ladies, is this okay with you?) When this woman opens her mouth to sing, the hairs raise up on the back of your head and your heart bursts into flames and the tears run down your face. And you know what? I'm not even going to mention her name because in a way, that would be using her too. So, Sweetie- you know who you are. I'm so glad you're back in my life.

Okay. What else?
Oh yes. In other music news, Lis's CD is almost completely done. I can't wait until I can sell it from here. Lon was in Tallahassee yesterday, mixing it, and he called me on his way home to see if he could stop by for coffee and a hug. I was about to take Owen to his mama so I didn't have the time, but when I talked to him, I told him how incredibly proud I am of him for supporting his wife in this project and for working so hard on it with her. I cried. I always cry when I talk to Lon and usually when I talk to Lis, too. Why is that? Because I love them so much. That's why. Anyway, he said it had been his glory to work on this CD and I said that of course it was, but a lot of men in this world do not support their wives the way he does and he said, "Well, I'm sorry to hear that."
And I cried some more.
God, I love those two people.

And Kathleen- my darling Kathleen! She hit an eight-point buck on her way home in the dark the other night and it tore up her car and hurt her already injured shoulder and no one in this entire world would be more apt to be upset about killing a deer. It's rutting season (What? there's a season? I thought rutting season was 365 days a year. Wait- that's just humans. And bonobos.) and the buck was crossing the road to get to the other side where the beautiful lady deer were bedded down in the field. It all came out okay, although Mr. Moon was not in town to come and take care of things, which had always been her plan if she hit a deer (Kathleen has plans in place for every contingency) so she had to call the sheriff and it was all okay. A man came by who wanted the deer for meat and she gave it to him and the sheriff said he would have taken it but he was on duty and couldn't. We do love our deer meat down here. Except for Kathleen who doesn't eat meat, of course, but she was happy that it would not go to waste. She went to the doctor yesterday and he gave her a fine panoply of muscle relaxers and pain medication (and here again, Kathleen is not a pill taker and really only wanted a prescription to get a massage) but she's taking some time off of work which she needed anyway and is resting. So bless HER heart. Mr. Moon was a little jealous when he heard about the accident. Kathleen's buck was bigger than the one he shot this year. Well, not bigger than the one in Canada, but in Florida. If has shot a buck. I get confused on that.

Speaking of which, I have a deer backstrap thawing that I need to get into the Crock Pot. Owen isn't here today and I miss him but I have a million things to catch up on and this has gone on way too long.

I feel like I should include a recipe here because all of this is so down-home and newsy but I don't have one springing to mind. I will remind you to eat your vegetables and get your fiber, drink your water and move your body.

I will also tell you that my children were and are my greatest teachers and have saved my life and soul and that my grandson is doing the same thing for me. I will say again that the Opera House has also been there and given me something I could not have gotten anywhere else and as nervous as I was to read in front of The Author last night, there is some part of me which has been made strong and confident in that old building by the people who have taken me in there and I am in amazement at every single element of that fact.

I will tell you that it's not how many friends you have, it is the love you have for the friends you have. Fuck Facebook and thousands of "friends." That ain't friendship and we all know it. Well, not for me, anyway.

I will tell you that the older I get, the more I know without any doubt that my marriage to Mr. Moon has been the greatest gift I could ever have received. His love and the love of my children has more than made up for whatever bad has happened in my life.

And I will tell you that this December day where it is not cold but is raining and where the frogs are croaking back in the swamp and the water drips off the tin roof into the azaleas beside the porch is a day I wish I could put in my memory forever. There is nothing at all special about it except for the fact that I am here in it, I am doing what I love which is to write about it all, and right now, a bird is singing his heart out in the wisteria, despite the rain.

So. Brown Paper Bag. Here it is. Take what you need, and you leave the rest.