It Ain't Wordless But There Are Pictures

It's so warm today, seventy degrees at seven thirty in the morning and humid? Child, you don't know humid unless you're here. Winter? Really?

I'm going to yoga today. I haven't been in a very long time. Between Owen and my foot and my yoga teacher's back (she has ruptured a disc for the third time- not doing yoga) I just haven't been. I miss it. I need it. My foot is still bothering me. Badly.
I went to the real shoe store yesterday. Not the Shoe Circus/Carnival/Warehouse/Giant-Enormous-Vast-Display-of-Shoes-Store. The real one where a guy who has training and years of experience and who runs looks at the way you walk and listens to you. I told him I thought I had a tendon problem. He showed me his scar where he'd had the same problem. He laced me up in new shoes for walking and watched me walk again.
Ice, he said.
Ibuprofen, he said.
I paid for the shoes, walked out with a smile.
Then I went to the Shoe Circus/Carnival/Warehouse/Giant-Enormous-Vast-Display-of-Shoes-Store to find something other than my beloved little Crocs which offer nothing more than a sole, which is really all I want in a shoe. But I realized that my poor foot, if it is ever to really heal, is going to need some more support, especially under my high-and-mighty arch. I bought a pair of fake Birks, made by New Balance at Ross for $12.99. My feet feel better already even if I do look like I am crunching granola. 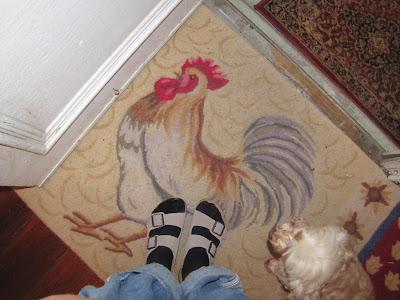 Anyway, I got up this morning and went out to the chicken house to let Miss Betty out before Sam got to her. The chickens were just beginning to stir and I wish I'd had my camera, the way they were all lined up on the roost, looking at Sam for direction on how to start the new day. He was doing a little Chicken Man Dance, his big dinosaur claws shuffling and tapping the ground with dainty steps. It was amazing! I didn't know they did that! And the hens began to jump off the roost and head into the coop, one by one and as they did, he jumped on them and had his way! The Man, The Rooster! The Amazing Chicken Love Maker! Then Elvis joined in and had a few ladies himself!
What excitement in the hen house and this happens every morning!

I took my camera back out, quick, quick, but I had missed most of the morning dance. Here's Betty, taking a grape from my hand: 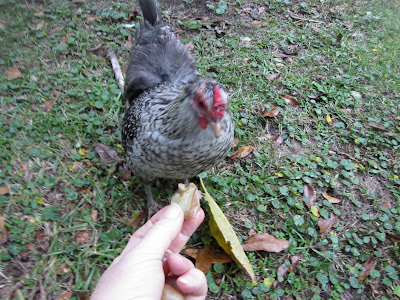 Look. I know I anthropomorphise my chickens. I can't help it. And so what? Maybe, dammit, they are just like us but with feathers and beaks and their own damn ways and culture and Betty is as sweet and darling in her ways and personality as I think she is.

It was actually chillier in the room the camera was in than it is outside and so my lens got foggy and besides that, it is awfully hard to get a good picture of chickens. They move so fast. But here's one I got of Sam and Elvis, my two noble (but occasionally mean) Roosters, head-to-head. They do not fight over the ladies much. I don't understand this. By the rules of roosters, they should fight like mad but they don't. 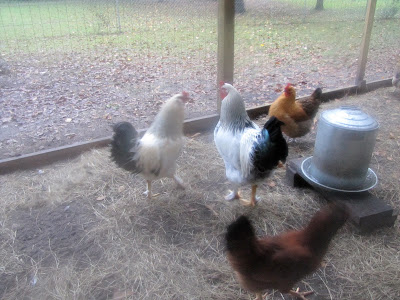 Plenty of hens for all, I suppose.

And here's a Bradford Pear leaf, fallen from the tree, and it is one of those whose colors remind me so much of the background of the Virgin of Guadalupe as she is represented so often: 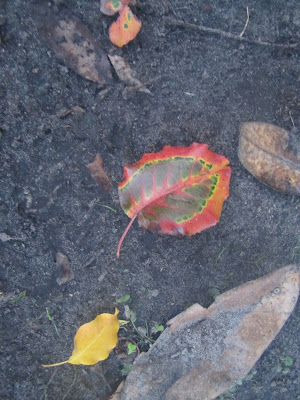 One more. Last night I took this one because the light spilling from the kitchen was golden and the roses in their last bloom of the season, were so brave, standing up and being so red and so soft and so gorgeous in the day's dying light. 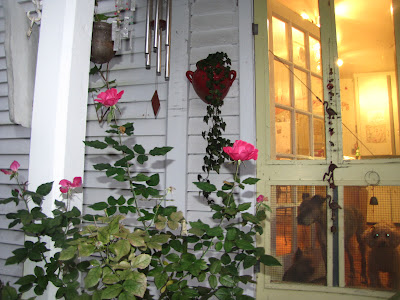 And now. Off to do Old Crippled Lady yoga.
And then I am going to lace on my new shoes and take a walk.
Ibuprofen may be involved.