It rained last night and I missed it and I feel cheated. I slept too well! But it's beautiful this morning, a little bit cooler, a little bit greener and the leaves are dripping which is a soothing sound.


If some mornings I wake up and have to spend an hour or so convincing myself that life is indeed worth living, there are mornings like these when I wake up feeling that all is relatively well and I can jump right into a feeling of contentment and dare I say it? Gratitude, although that word, as I have said, has been used by so many for so many lame things that I feel as if I should go wash my hands after I type it or perhaps send Oprah fifty cents because surely she owns the rights to it.
Still. Yes. Gratitude. 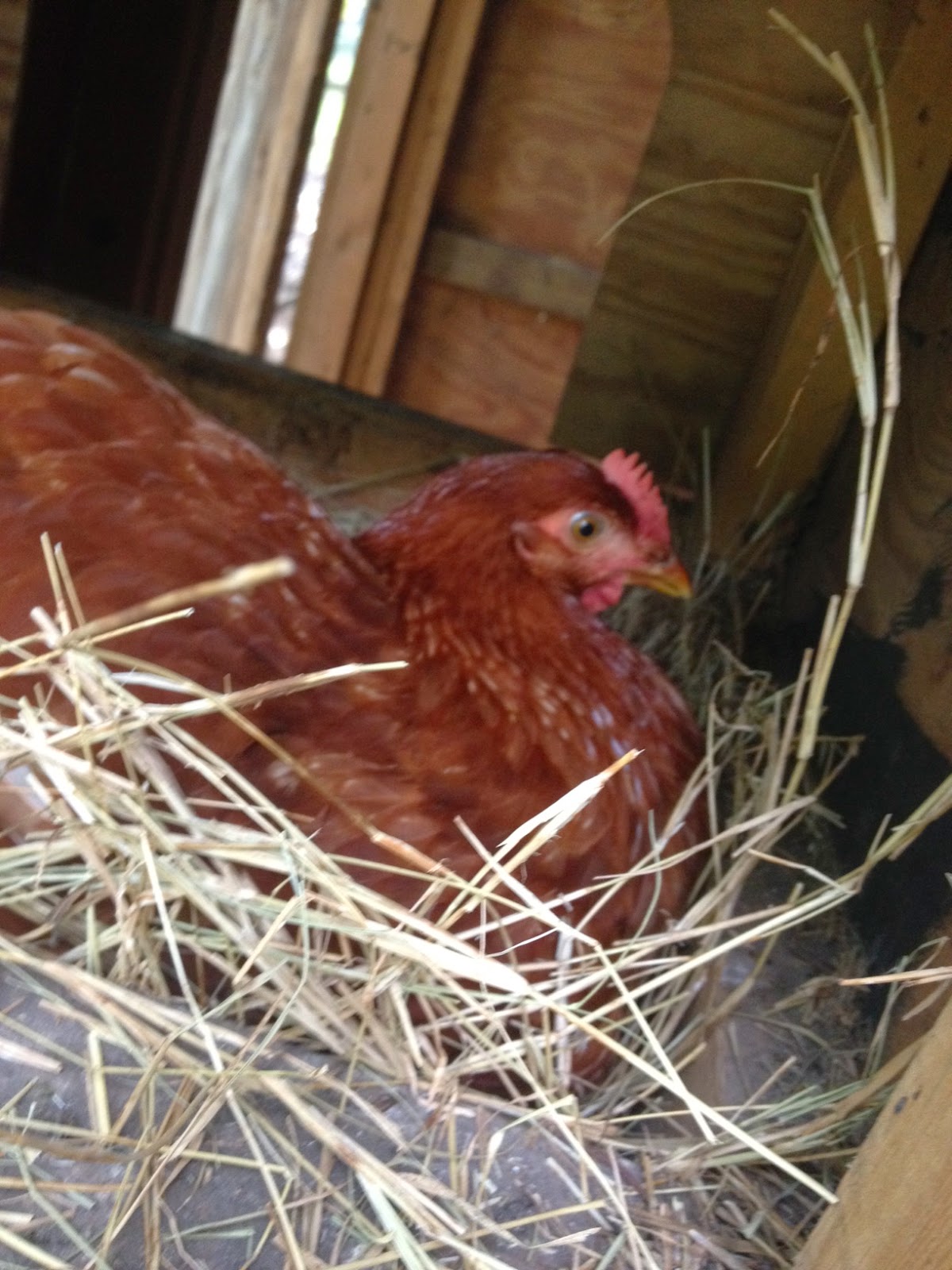 I have been getting one beautiful small brown egg every day and I had thought that perhaps it was Miss Lucille's egg and here she is on the nest this morning. I am beginning to wonder why the rest of the young hens aren't laying or thinking that perhaps they are laying but somewhere in the woods which would make the raccoons happy but doesn't do me one bit of good. Mr. Moon said this morning that before I let them out of the coop I should make them all sign a contract, promising an egg a day.
I wish.
Their signatures would all be naught but chicken scratch and not legal in a court of law so I suppose there is no point.

Speaking of courts of law, there was a hearing yesterday in Miami wherein six couples have sued to overturn the same-sex marriage ban. As we know, these cases are happening everywhere and the bans are being overturned like dominoes. We shall see what happens in Florida. I watched a little of it yesterday, live-streamed, and of course I am no lawyer but it seemed to me that the arguments against the plaintiffs were ridiculous and even more importantly, it seemed as if the judge, Sarah Zabel, did not find them very convincing either. She is a young woman and her questions appeared to me to point out the absurdity of the claims being made. There were questions I wished she would have asked, especially to the point the attorney kept making about how marriage for millennia has been defined as being between a man and a woman. How many wives did King David have? Which may be apples and oranges as one assumes that David's wives were all of the female variety but still, not exactly one man, one woman.
He also kept saying that one of the main reasons gay marriage is wrong is that procreation, which is the purpose of marriage, is not possible within it. Judge Zabel did point out that there are many people who marry who do not intend to nor do they have the capability to procreate which the lawyer agreed was true. And then he kept trying to make the point that the children in these non-procreational marriages are not being served by having gay parents. That the best way to raise a child is in a family with a Mother and a Father.
To me it seems that any halfway intelligent twelve year old could point out the fallacies in these arguments and that a great blue whale could fall through the holes in them but that's just me.

The judge has not made a ruling yet but will. There will be appeals, you can count on it, no matter what the outcome and of course eventually and perhaps before the next ice age, Florida's ban will fall with the rest of the dominoes and if pigs fly, then pigs fly.
So be it and they can fly out my butt and I'll be thrilled.
And as for all of those arguments that this is just the beginning of the slippery slope leading to the legalization of marriage between siblings as well as polygamy, I say- whatever.
If two consenting adults or twelve consenting adults want to get married, I'm fine with it. So there.
I do draw the line at marriage between human and goat.

I just saw either Cha-Cha or Chi-Chi fly up into a nest. I can also see Maurice out back, observing the chickens, which she loves to do. I still can't quite get over the fact that this cat has come into our house and taken over the way she has. I bought her some catnip yesterday and sprinkled a little on the floor for her last night. She took a sniff and walked away on her dainty, silent little feet. She just said, "NO!" As Lily pointed out when I told her about that, Maurice is a serious cat and has too much work to do to be messing around with drugs which is true. She brought me a nicely gutted frog yesterday and left it on the kitchen porch. Before bed every night, she patrols the perimeters of the room. She has her jobs to do and she does them.

Oh wait! That is not Maurice out there watching the chickens! It is the orange feral cat with one eye. God, it's a freaking menagerie around here. Maurice is exploring the little pond, probably searching for another frog.

And so it goes in Lloyd today. Chickens are scratching, cats are watching and hunting, the dogs are sleeping. I have to get out and take a walk. It is time to get my exercise and diet back under control. I have gotten sloppy with it and THAT DOES NOT WORK!

May peace be with you and let me just say that polygamy works well within the domestic fowl culture. I have seen very few human marriages as successful as the one I observe daily between Elvis and his sister-wives.