So This Is Why I've Lived So Long

It's been another one of those magical, good days.
When I got to Lily's house, Gibson ran to meet me and hugged me and said he was so glad that I was going to stay with him. And I was too.
After Lily left, Magnolia wanted some attention and so I held her and talked to her and she was still a bit fussy so I gave her a bottle and she was happy and then she spit up and then I changed her clothes which made her even happier. That girl loves her changing table in her pink room with the light coming in and I love seeing her beautiful little baby self, remembering the night she was born and I put clothes on her for the first time. We talked and she smiled and gave me coos. 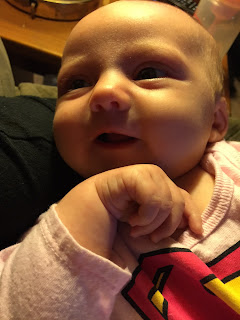 We decided on the boat yesterday that Maggie June is like a Jason-Lily biscuit. A perfect combination of both of them made into a warm and delicious treat. Pass the butter and honey.

It was such a beautiful day that I put her in her little car seat which she loves and we went outside and she seemed to be mesmerized by the cool breezes, the leaves in the trees above her moving with the wind, the changing patterns of light and shadow. She lay watching it all for awhile and then...she fell asleep. 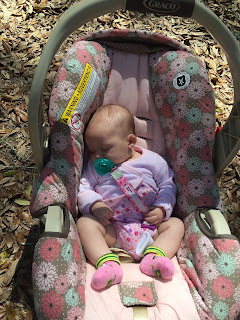 We moved back inside and Gibson was so snuggly and cuddly. We played the spider game which is where I tap my fingertips so gently over his arm, being the spider, and then play in his hair, the spider thinking that it's a forest there and then coming to nap in his ear.
He giggles and laughs and says, "Do it again!"
That boy is such a love.

After Lily got home from the dentist I got a text message from Yolie, asking me to supper in their Airstream. Mr. Moon was going to be leaving for auction but I was so thrilled to be asked and of course I accepted. I came home and made Mr. Moon's snack bag and his popcorn and kissed him good-bye for his journey to Orlando then took a shower and put on real (not overalls) clothes and drove over to the campground where they are staying. I took Kaleb a little wooden cigar box with some dinosaurs in it as well as an old very simple book about insects which was perfect because when I got there, he ran to meet me to show me the bugs he had just captured. Some sort of little beetle with a few ants and it was an entire universe in there, the ants going after the poor wee beetle, and there was much discussion about karmic implications and so forth, although Kaleb was just mostly interested in the life and death situation going on without the need to hear about all of that karma stuff.
Little boys. But he liked the book and we looked at some of the pictures and I got to meet Lu! Or is it Lou? Whatever. Such a beautiful old bulldog. 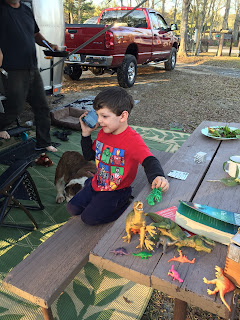 You can see her there, hiding behind Kaleb.

I got a full tour of the Airstream and it's as comfy and tidy and lovely and beautiful as you can imagine. And Scott had made a delicious frittata out of Moon eggs and greens and a salad that was perfect. We ate outside on the picnic table, the skillet with the frittata in the middle so that we could just help ourselves to its goodness. 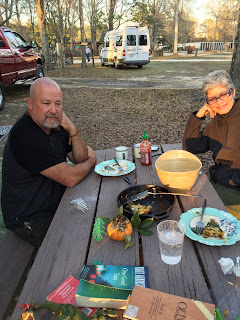 After we finished our supper we moved inside and talked about all the things that really matter- love and life and death and religion and Uma Thurman. And then we had large delicious cookies with ice cream.

It was like a dream and oh yes, we discussed dreams as well.

We exchanged tribal gifts and hugs and I got in my car and drove home. I wanted to take the back roads instead of the quick and dirty interstate route and I did, moving through the night in my swell, cool/hot little Prius. It took me longer but it was good to drive lonely roads and I realized that yes, I am mostly night-blind but that my real fear about driving at night is that I'll find myself in an alternate universe and not know how to get back to my own universe which sounds silly but is true. I may have passed through one or two of those but eventually, I found the road that leads to Lloyd and here I am in my own cozy world, chickens all counted and accounted for and I have talked to May on the phone (she is marrying her Michael in five days!) and my husband made it safely to Orlando and I have clean sheets on the bed and perhaps Maurice will come in and sleep by my legs, her weight a great comfort to me when I wake up from my dreams.

I couldn't have/I never did/
dream
dreams of as much dreaminess as the dream I am living.