I would have given anything today to stay at home because I have so much I need to do here from cleaning out the refrigerator to ironing to gardening to just being home.
But. Due to some mix-up at my nurse-practitioner's office, my prescriptions were finally ready and I had to go get them. I just don't trust that office. I need to find someone new but of course I haven't, as all things medical make me want to die. They called me last week when I called in my 'scripts to tell me that I really had to come in and get a check-up because it had been too long and yes, they would renew my two medications for one more month but to continue having their office to prescribe them I had to go in and see them.
Which of course threw me into full-blown panic and my appointment is next Monday and y'all better start praying for me now.

Anyway, yes, so I had to go to town and I went to the library and I went to Costco and I went to Publix which is where my antidepressant is refilled and I bought a few things because GOD KNOWS I didn't get everything I needed yesterday and I am sort of thinking about trying to eat all healthy and shit again and so...vegetables.
I swear. I should try the all-meat, all cheese, all potatoes diet. With bread. Is that a thing? No?
Fuck.

Also, Gibson is still sick and is now throwing up and has the diarrhea and some other things going on AND Owen woke up this morning with a fever and so I needed to take a few things to Lily and by the time I got home after cuddling my boys and kissing them (I never get sick which is another reason I never go to the doctor) and peeping in on the sleeping Magnolia and okay, sniffing her head a little bit, it was after five.

I struggled in with all my bags, put things away, sucked down my late-afternoon espresso, brought in the sheets off the line, swept the dirt off the kitchen porch which I feel fairly certain my husband was about to finally say something about, cleaned the chicken poop off the back porch where Camellia and Chi-Chi and Cha-Cha come to eat from the cat food bowls, picked greens from the garden as well as a few carrots, collected the pitiful number of eggs (where are these hens laying?), washed the greens, made up the bed and started cooking hard boiled eggs and green beans and potatoes for the all-healthy-and-shit Salade Nicoise I'm making tonight.

Mr. Moon just got home and thankfully, he's not that hungry.

But really, what I want to talk about is the Rolling Stones' concert in Havana coming up on Friday.

I have been completely fascinated by what's going on there now during Obama's visit. When I was a child down in Roseland, the threat of the Soviet Union bombing the US from there was not a vague threat. We were well in range of whatever bombs might fall and Cape Canaveral was close as hell. And at the same time, I adored "I Love Lucy" and the episodes where they went down to Havana, Ricky's home place, made me long for something I had no idea about. Florida's relationship to Cuba is deep and wide with all of the refugees who have made this state their home. The cuisine, the culture- I've always been fascinated by it and I have had friends who were either born in Cuba or are first generation Americans and they talk about Cuba as if it were heaven. Only ninety miles from Key West, we fly over it every time we go to Cozumel and I love the fact that those two island share much history and a lot more.
You can buy Cuban rum and Cuban cigars in Cozumel. The main bean eaten there, a staple, is the frijoles negro, as it is in Cuba. I feel a draw to Cuba with its beaches and its jungles and its plantations and its music (thank you, Ry Cooder) and its architecture and its bars where Hemingway drank, its waters where he fished. I have read as much as I can from its literature which is rich and gorgeous. As much as the US has tried to deny the very existence of Cuba, there has been no way to do so.

And so, to experience this moment in history where my beloved president and his beautiful family are visiting there, opening up relations with the government is amazing to me.
Sure. There is so much still going on there which demands attention but we have to start somewhere and we here in the United States have our own problems in the area of human rights to solve. So jump off your high horse and get down to business.

And so this week, Obama is there and meeting with Raul Castro and today a baseball game was played between the Tampa Rays and the Cuban team and on Friday, GOOD Friday, Mick and Keith and Charlie and Ronnie will be bringing rock and roll to the island for a free concert. Free to the people. It is costing them a fortune but they have fortunes to burn and although I think that Obama's visit is going to change things between our two countries for the better, I can't help but think that baseball and rock-and-roll are going to take it a step further. 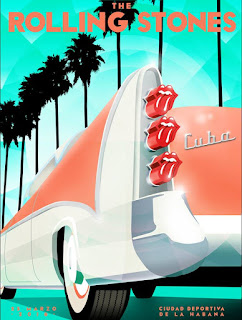 Yes. Let the military bands play, let the leaders meet and speak. Let the men in suits do their thing and then...
Bring on the baseball.
Bring on the Rolling Stones and dance.

I have great hopes for the results of this week's events in Cuba.
And I have to tell you that I hope with all of my heart that Keith gets to spend some time in some back-alley cantinas, sharing rum drinks and smiles and perhaps even a song or two with Cubanos who happen to be in the right place at the right time not only for them but for him, too.

I sincerely believe that art and music do more to create bonds between people than all of the officials can ever hope to achieve. And that with the opening of our borders (such man-made things) there can be full-sharing of art and of music and of technology and of culture between us.

All right. That's all I have to say. Except that I hear the Cubans love to dance more than anyone in the world and that since dancing is my favorite form of prayer, I think that this is going to be a very good thing and Lord, I wish I was going to be there.