What Is YOUR Super Bowl Ritual?

My friends from out of town called this afternoon and told me that they were not going to be able to come by until tomorrow, which was fine. I'd already gotten a quiche in the oven but it will still be good tomorrow. And so I had an empty afternoon to fill.
I am an American, supposedly, and have the birth certificate and all to prove it, and as such, I think it was decreed by law that I have to perform some sort of ritual for Super Bowl Sunday. So, since I had the spare time I decided to go do some much needed grocery shopping and then go by Lily's house. She is actually hosting a Super Bowl gathering at her house. The reason she is doing this is a long story (she cares about football about as much as I do) but she is cheerful about it because nothing makes her happier than finding delicious recipes on Pinterest and making them. Especially the party-type foods. While I was at the store, I texted and asked if she had the ingredients for my favorite party food of all times, which is the Velveeta/Rotel cheese dip for tortilla chips.
She did not, so I bought them, not because I planned to be at the party but because (and I should be so ashamed of this and I AM NOT) I wanted a bite of Velveeta. Look- I love good cheese. I mean, GOOD cheese. Goat cheese, stinky cheese, aged cheese, runny cheese- I love them all. And Velveeta isn't even cheese by definition but I still like it tremendously and of course I don't allow myself to buy it but today I had an excuse and I took it.
I put all my groceries in the car and stopped by the library to return a book and then drove to Lily's where I got to give Magnolia a bottle and kiss her pretty little face about a thousand times and watch the boys do amazing jumping tricks from the coffee table to the sofa and then I chopped a few onions and peppers for Lily's Philly Cheese Steak sliders and...eat some Velveeta.
I also had a bite of Lily's guacamole which was delicious.

Then I came home and watched this:

I believe that watching this video from a documentary about the Stones playing Super Bowl halftime in 2006 is my Super Bowl ritual. I remember watching their performance live, ten years ago. My across-the-street neighbors were here to watch the game and their (then) young daughter was here to watch it too. The build-up and anticipation as the stage was brought out and assembled in five and a half minutes (watch the video- it's awesome) was tremendous and even young Sarah was caught up in it until the camera focused on Mick and Keith's faces as the first chords were struck and she turned to her mama and said, "But they're so old!"

So. My Super Bowl ritual is complete. I had a bite of guacamole and I've watched the video and to make things even more Super on this Super Bowl Sunday, I believe I will watch this:


Because...Bruce! 2009. Clarence Clemmons was still alive and the E Street Band rocked it more in twelve minutes than any other band in the world could have rocked it in twelve hours.
If you can watch this without at least doing a little seat-dancing, call your doctor. Please. Because you need help.

So. That's my Super Bowl ritual right there. And Mr. Moon just sent me a picture of him at Lily's house. This is what he's doing: 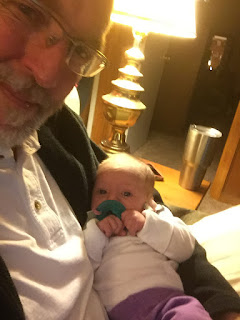 I hope he gets some of the queso dip and guacamole. I feel certain he will. And maybe a chicken wing. Or two. I hope Gibson's okay. He's been a bit confused about this party, thinking that it might actually be his birthday party which isn't happening for another month and a half but for which he is in deep and profound planning mode.

Wish I had some more Velveeta.