No News Is Not Necessarily Good News And, Boys In Trucks

Well, Rusty is still not down from the tree although Jason and Mr. Moon worked through most of the afternoon to try and get him down. They finally managed to get a rope thrown over the branch next to the cat and via that, hoisted up a bin with tuna in it (an entire can) which is tied off and waiting for him to jump in to be lowered down.
So far though, he has not taken the bait. He is meowing and I know he doesn't want to spend another night in the tree but how do you communicate instructions to a cat who is up a tree and probably terrified? We feel certain that a coyote or something of that ilk must have chased him up there or he would never have climbed that far. 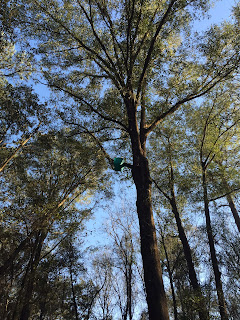 Lily and Magnolia and Lily's friend Edie went off and ran errands for awhile and Owen and Gibson and Edie's son played in the back of Mr. Moon's truck for at least an hour. Maybe more. They found straps to "fish" with and made up games and stories and pretends. I love it when kids do that. 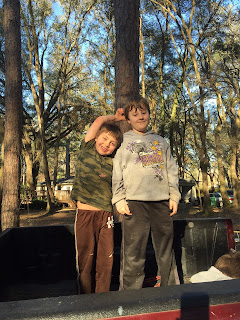 And that's the news. I went out and picked some greens for salad and two of the first beautiful carrots. 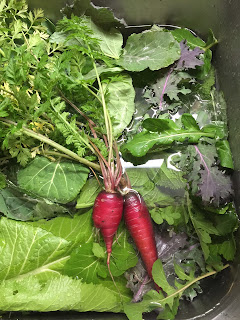 Last night we had a walk-around with our martini and as usual, bemoaned the lack of sunlight on the garden due to all the trees but we ended up saying that all-in-all, the winter garden is the best and it gets enough sun and that's worth it all in the end. The trees lose their leaves in the winter which gives the garden a few more hours of light than it gets in the summer and greens just do well here and now I know that carrots do too.
Beets- not so much.
Oh well. Mr. Moon hates beets anyway.

Well, I see that Justice Scalia has died and I'm a horrible person because I am grateful for the fact that Obama can nominate and seat a less conservative judge.
So be it. At least I admit it.
But I have to say that anyone who believes that the Constitution should be strictly interpreted from the Founders' point of view has to have a few problems with logic. I mean, they wrote a good document...for the times. They couldn't possibly have imagined a world like the one we live in now. They were rebels and liberals and crazy idealists for the most part and I doubt they would have sided with the likes of Scalia now anyway but hey! That's just one woman's personal opinion and let's face it- I am no constitutional scholar.
But I am sorry for Scalia's family and that goes without saying but I'll say it anyway.

I hope Rusty gets in the bin. It's going to get cold tonight and I honestly don't know what else can be done to get him down. He sure can't jump that distance. I mean, he could, but I don't think it would be a happy ending.